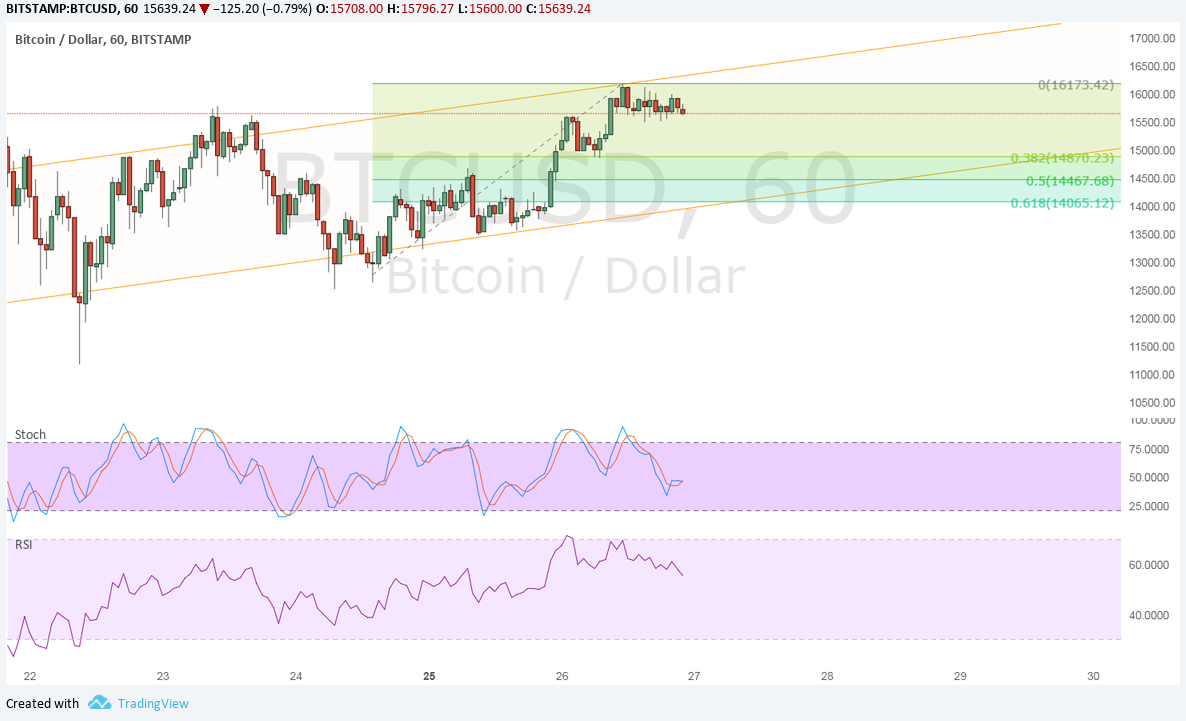 Bitcoin price is slowly starting to trend higher once more, possibly rebounding from the slide in the previous week.

Price is trading inside an ascending channel pattern and is currently testing the resistance.

A pullback to support could be due and using the Fib retracement tool shows the potential inflection points.

Bitcoin price is slowly starting to trend higher once more, possibly rebounding from the slide in the previous week.

The 100 SMA is still below the longer-term 200 SMA on this time frame, so the path of least resistance is to the downside. This means that the selloff is more likely to resume than reverse.

However, the gap is narrowing to signal weakening bearish momentum. If an upward crossover materializes, bullish pressure could kick into high gear and allow the uptrend to continue.

Stochastic is also on the move down, though, so buyers might be taking it easy. This could allow bitcoin price to retreat to the channel support at $14,000 near the 61.8% Fibonacci retracement level. A shallow pullback could find a floor at the 38.2% Fib closer to $15,000 and the mid-channel area of interest.

RSI has plenty of room to head south, so bitcoin price might follow suit until both oscillators hit oversold levels and turn back up.

Analysts are attributing the recent climb to improved access to buying cryptocurrencies. However, Coinbase suffered a backlog of outgoing transactions earlier on and the issue remains unresolved.

Event risks involve additional network upgrades or “hard forks” but rising investor interest appears to have been enough to keep bitcoin price supported. After all, bitcoin futures on the CBOE and CME have allowed access to more institutional and retail investors

Still, the dollar could prove to be a worthy opponent as the signing of the tax bill into law would be very positive for the US economy.