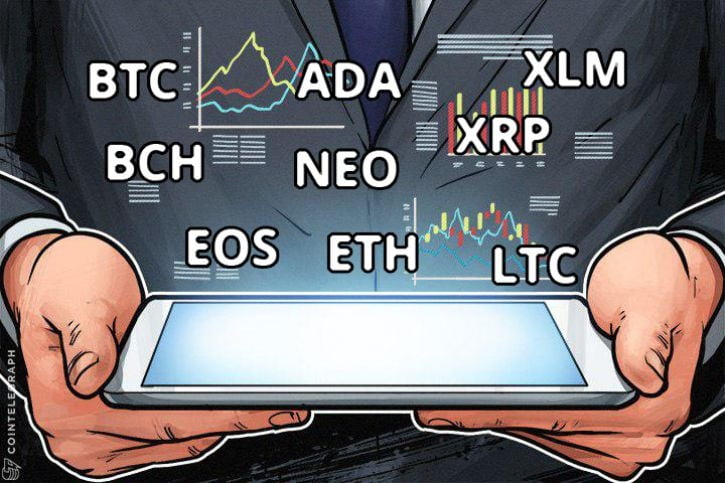 Fundstrat's Thomas Lee believes that Bitcoin mining is an unprofitable venture at current prices. A model developed by his data science team has pegged the breakeven price at $8,038.

If prices fall further, the miners will start to lose money on their operations. Shone Anstey, co-founder and president of Blockchain Intelligence Group opines that this may force a few miners to stop their operations.

Technical analysts watch the 50-day MA and the 200-day MA closely to forecast the path of least resistance. A death cross, a situation where the short-term moving average falls below the long-term moving average, indicates weakness. Paul Day, a technical analyst and head of futures and options at Market Securities Dubai Ltd believes that if the cross occurs, Bitcoin can sink to $2,800.

Though we do keep those factors in mind, we should not be worried much by them. Let’s see what our analysis forecasts.

The BTC/USD pair remains in a downtrend as prices are trading inside the descending channel and below both moving averages. The 20-day EMA has broken below the 50-day SMA, which is another bearish move.

Our bearish view will be invalidated if the bulls manage to sustain above the $10,000 levels.

We expect the bulls to attempt a bounce from these levels. The pullback will face selling pressure at the 20-day EMA and the resistance line of the descending channel.

If the bounce fails to gain strength, the next down leg in the ETH/USD pair will break below the $565.54 support and move lower to $500 and then to $430 levels.

Aggressive traders can buy a very small position, about 30 percent of the usual position size at $630, if the level sustains for about four hours. The stop loss can be kept at $560. If the price fails to break out of $700, positions can be closed, else please trail the stops higher.

Bitcoin Cash fell to $910.6798 levels on March 15. Currently, the bulls are attempting a pullback from the supports.

The downtrend line should act as the first level of resistance. Above this, the 20-day EMA and $1,150 will act as resistance. If the cryptocurrency turns down from these levels and breaks below $900, it can slide to $778.2021.

The BCH/USD pair will become positive in the short term once the price sustains above $1,150.

The bulls are attempting to pull back above the March 15 high of $0.72685. Once this level is crossed, a move to the 20-day EMA is possible where the cryptocurrency will face strong selling pressure.

During the next decline, if the XRP/USD pair does not break below $0.695, we can expect it to trade in a large range. We may try to trade this, but as we don’t see any buy setup, hence, we don’t recommend any trade on it at the moment.

Stellar remains in a downtrend, and it continues to decline gradually. It is close to our first lower target of $0.22.

If the bulls fail to defend these levels, the XLM/USD pair can slide towards the support line of the descending channel.

We remain bearish on the cryptocurrency until it stays below the 20-day EMA, the downtrend line and $0.32.

Litecoin is trying to pull back towards $186.823 levels, where we expect another bout of selling by the bears.

Both moving averages, the downtrend line and the horizontal line, all converge around $187 levels making it important resistance. If prices turn down from the resistance and break below $157.236, it might fall to $141.

The LTC/USD pair will indicate strength if it can sustain above $187 levels for a day.

It continues to be in a strong bear grip as the cryptocurrency has not even touched the 20-day EMA for more than a month.

The ADA/BTC pair will become positive once prices break out of the downtrend line and the 20-day EMA. Until then, all attempts to recover will face selling at the resistance.

The bulls are trying to hold the critical support level of $63.62 on NEO. We can expect a retest of the breakdown level at $86. If the bulls succeed in sustaining above this overhead resistance, it will indicate that the bears are losing strength.

If prices turn down from $86 levels, we anticipate the next down move to a breakdown of $63.62 and move towards the lower target objective of $49.

We should wait for a confirmed buy setup to initiate a long position on the NEO/USD pair.

EOS has been declining gradually for the past few days. It fell to a low of $4.7484 on March 15. We can expect the bulls to attempt a pullback from the current levels, but the 20-day EMA has been acting as strong resistance since end-January of this year. If prices turn down once again from there, a fall to $3.26 is likely.

If the EOS/USD pair sustains above the $7 levels, we can expect it to rally to the 50-day SMA and then to $10 levels.

Currently, we don’t find any buy setups on the cryptocurrency.