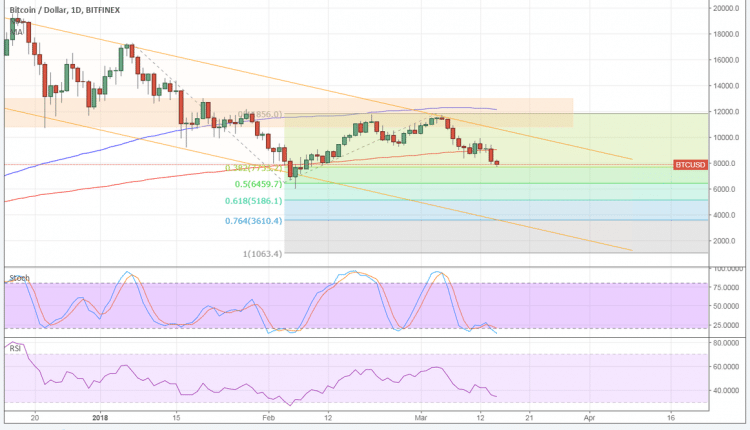 Bitcoin Price Analysis — How Low Can It Go?

Bitcoin is showing more bearish momentum so it's time to look at the next downside targets.

Bitcoin looks ready for more losses as price gained downside traction after its break below a double top neckline. Applying the Fibonacci extension tool on the latest correction shows the potential targets.

Technical indicators, however, are suggesting that the longer-term uptrend could still resume. The 100 SMA is above the longer-term 200 SMA so the path of least resistance is still to the upside. Then again, bitcoin has fallen below the 200 SMA dynamic inflection point, which could be seen as an early signal of a pending downward crossover.

Stochastic is indicating oversold conditions to show that sellers are tired, but the oscillator has yet to move higher to reflect a return in bullish pressure. RSI has some room to head south so bitcoin could still see some losses from here.

The latest wave of selling is seen to have spurred from Google’s announcement to ban cryptocurrency ads starting June. Similar action was taken by Facebook back in January when it banned ads on binary options, ICOs and cryptocurrencies, leading to roughly a 12% drop in bitcoin price then.

It doesn’t help that regulators are stepping up their game to oversee the industry, leading to speculations of more arrests or possibly shutdowns. There are also rumors that the Chinese government continues to crack down on crypto activity in the country.

IMF head Lagarde herself called upon fighting “fire with fire” to encourage encryption experts to help in the crackdown on criminals using cryptocurrencies to facilitate their activity. More remarks in the same line from other top officials could lead to further weakness in bitcoin