What Is a Bitcoin Worth?

The virtual currency has seen its value soar in recent years. 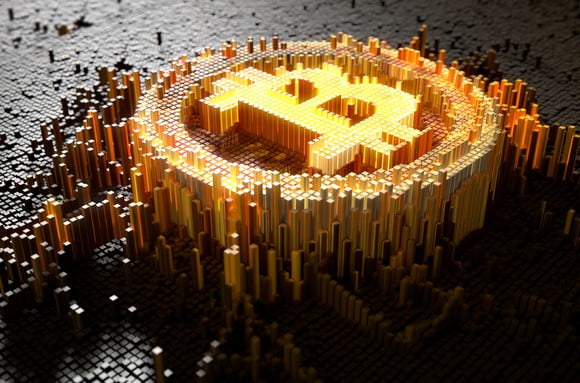 Bitcoin has existed for less than a decade,

but it has achieved amazing popularity across the globe, and its value has risen along with its use. Shortly after its creation in 2009, one could buy the virtual currency for less than a penny per bitcoin. Now, a bitcoin is worth about $1,250, and many believe that the upward trend for bitcoin could continue indefinitely. Despite there being plenty of skepticism about the inherent value of bitcoin, the currency has survived dramatic volatility without losing favor among its core users.

The history of bitcoin's value

During the first couple of years of its existence, bitcoin saw dramatic gains in price. From its penny valuation in 2009, bitcoin rose to $0.10 by 2010 and first hit the $1 mark in early 2011. That ignited a huge wave of new demand for bitcoin, sending the currency up to more than $10 by mid-2011. Yet at that point, bitcoin showed its propensity for big ups and downs. Within just a few months, bitcoin prices dropped 80%, punishing those who had gotten in at the top and were looking for quick gains. Still, those who stuck with bitcoin earned back their losses, with the currency reaching the $10 mark again in late 2012.

From there, the next wave of interest in bitcoin took the currency to the $100 mark and beyond, climbing to nearly $200 by early 2013. The bankruptcy of the Mt. Gox bitcoin exchange briefly took a big toll on prices, cutting bitcoin's value in half, but before the year was out, the digital currency climbed above $1,000 as market participants increasingly believed that bitcoin would achieve global currency status and prove to be a better alternative to traditional government-issued currency. The frequency of financial crises across the globe during the first several years of bitcoin's history certainly helped feed that theory and added to bitcoin's appeal.

Since then, bitcoin has remained volatile, but not to the same extent as it was earlier in its existence. Prices sank to around $200 in 2015, but the currency picked up steam again more recently. This year, bitcoin regained the $1,000 level and has climbed as high as nearly $1,300.

The true measure of bitcoin's worth

One concern that some have expressed about bitcoin is that the currency has no intrinsic value. Gold coins, by contrast, represent a given weight of an actual commodity with practical applications, and gold investors take comfort in the fact that their bullion is worth something beyond monetary terms. That's not true of bitcoin, which one receives as a reward for solving complex mathematical problems.

Yet bitcoin advocates note that the same is true of paper currency. It used to be that Federal Reserve notes were tied to the value of gold or silver, but those days are long gone. Just as a dollar bill only has whatever value a buyer and seller assign to it, so too does bitcoin have practical value to the extent that those who make exchanges of the digital currency agree on what it's worth.

One reason why bitcoin has become more valuable likely has to do with the fact that one can use it more widely now than early in its history. Many major technologies and retail companies accept bitcoin in the same way they would older currencies, and small businesses have jumped on the bitcoin bandwagon as well. Moreover, with relatively low transaction fees for transfers, bitcoin has become a popular way to move money while avoiding the costly charges that banks and other financial institutions often impose.

Keep an eye on bitcoin

Bitcoin has seen dramatic price increases recently, but the one thing investors in the currency can be certain of is that volatility in both directions will continue. With some calling for continued exponential growth in the value of bitcoin while others believe it's a bubble waiting to burst, the market for bitcoin is sure to be exciting for the foreseeable future.

Imagine if you had bought Amazon in 1997… a $5,000 investment at that time would be worth almost $1 million today. You can't go back and buy Amazon 20 years ago…but we've uncovered what our analysts think is the next-best thing: A special stock with mind-boggling growth potential. With hundreds of thousands business customers already signed up, this stock has been described as "strikingly similar to an early Amazon.com."