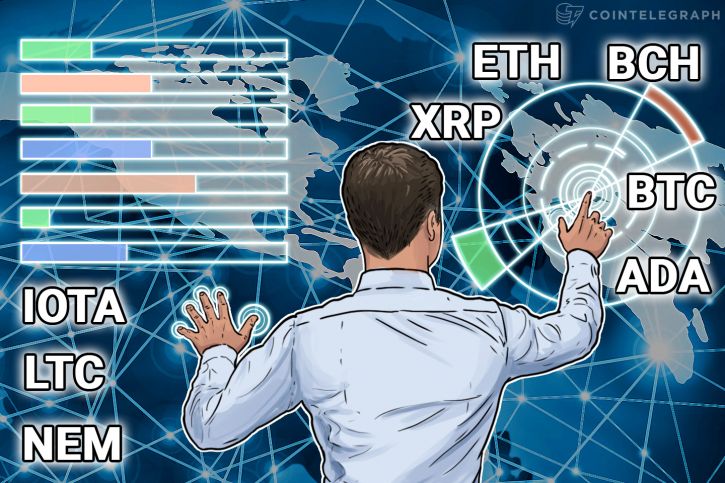 After a sharp fall, the aggressive bulls jump in and buy at lower levels. This strategy has resulted in huge gains for the cryptocurrency traders in 2017. However, unlike previous occasions, we have not seen a sharp rise this time. This shows that the traders are not confident of a huge rally from the current prices.

In the next few days, we expect a range bound action in most of the top cryptocurrencies.

Currently, the bulls are attempting a reversal, which is likely to carry the cryptocurrency to the neckline of the head and shoulders pattern at $13,202 levels.

On the other hand, if the bulls succeed in holding the support zone, it will lead to a start of a new uptrend. Nimble-footed traders can play the rise, but others should wait for more clarity to develop.

The bulls bought the dip aggressively, which has resulted in a pullback that carried the cryptocurrency towards the 50 percent Fibonacci retracement levels of the recent fall from $1424 to $770.

The current increase is likely to face resistance at the $2072 levels, which was the support of the range previously. We shall get a confirmation of a bottom during the next downturn. If $1364.96 breaks, a fall to $1194 is likely.

Our bearish view will be invalidated if the BCH/USD pair sustains above $2072 for a day.

We had forecast a fall to 61.8 percent Fibonacci retracement levels of the latest rally, however, Ripple fell close to the 78.6 percent retracement levels, which coincided with the lower end of the descending channel.

The cryptocurrency has broken out of the descending channel, which suggests that the downtrend is over. However, the present increase is facing resistance at the 20-day EMA, above which a move to $2.20 is likely. At that price, the XRP/USD pair will face resistance from the trendline that had previously acted as a strong support.

However, if the cryptocurrency fails to break above the 20-day EMA, the bears will attempt to resume the downtrend. Support lies at $0.87.

We expect a few days of range bound trading.

IOTA broke down of the bearish descending triangle pattern on January 16, which gives it a pattern target of $1.10.

However, the cryptocurrency took support at $1.93 levels on Jan. 17.

Currently, the IOTA/USD pair is retesting the breakout levels of $3.032. If the bulls breakout of the overhead resistance and the downtrend line, our bearish view will be invalidated.

However, if the bears defend the $3.032 levels, we are likely to see another bout of selling, which will retest the lows.

We don’t find any clear pattern; hence, we are not recommending any trade.

If the bulls breakout of $205, a move to $225 is likely, where both the moving averages converge. This level is likely to act as a resistance.

We don’t find any reasonable trades on LTC/USD pair.

NEM fell close to the 78.6 percent retracement levels on Jan. 16 and Jan. 17. Thereafter, the bulls have commenced a pullback, which is likely to face a strong resistance at the downward trendline.

If the price moves above the downtrend line, an increase to $1.45 can’t be ruled out.

The next fall towards the recent lows of $0.55134 will confirm whether the bottom is in place or is there further to go.

Until then, we shall remain on the sidelines on the XEM/USD pair.

Cardano broke below the trendline support on Jan. 16 and Jan. 17, however, the bulls defended the support and pushed prices higher quickly.

The cryptocurrency pair will become negative below 0.00004730.