Bitcoin fell below $9,000 during Friday afternoon Asia trade, extending losses seen earlier in the week when it dropped below the key $10,000 level.

At its current levels, bitcoin has declined around 24 percent for the week.

The cryptocurrency came under pressure earlier in the week after the U.S. Securities and Exchange Commission said exchanges that offer trading of "digital assets that are securities" would have to register with the agency.

That statement on Wednesday came after weeks of subpoenas from the SEC in its attempt to establish better control over the many trading platforms and exchanges.

Regulatory developments in the Asia Pacific region also likely put a dampener on prices this week.

Japan's Financial Services Agency issued punishment notices to a number of exchanges in the country on Thursday, Reuters reported. Regulators also suspended operations at Bit Station and FSHO for a month, the news agency reported.

Regulatory scrutiny in the country increased after $530 million worth of virtual tokens were stolen from Coincheck, a Tokyo-based cryptocurrency exchange, earlier this year. 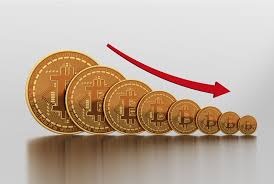 South Korea's justice minister said on Thursday that a bill is being prepared to ban all cryptocurrency trading in the country.

That news is a major development for the cryptocurrency space, as South Korea is one of the biggest markets for major coins like bitcoin and ethereum.

"There are great concerns regarding virtual currencies and justice ministry is basically preparing a bill to ban cryptocurrency trading through exchanges," Park Sang-ki said at a press conference, according to the ministry's press office.

Bitcoin tumbled more than 12 percent following Park's remarks, according to CoinDesk's bitcoin price index that tracks prices from four exchanges. At 1:26 p.m. HK/SIN, the cryptocurrency price retraced some of its losses to trade at $13,547.7.

Park added that he couldn't disclose more specific details about proposed shutdown of cryptocurrency trading exchanges in the country, adding that various government agencies would work together to implement several measures.

Reuters further reported that a press official said the proposed ban on cryptocurrency trading was announced after "enough discussion" with other government agencies including the nation's finance ministry and financial regulators.

Cryptocurrency trading in South Korea is very speculative and similar to gambling. Major cryptocurrencies like bitcoin and ethereum are priced significantly higher in the country's exchanges than elsewhere in the world. For example, bitcoin traded at $17,169.65 per token at local exchange Bithumb, which was a 31 percent premium to the CoinDesk average price.

That difference in price is called a "kimchi premium" by many traders.

In fact, earlier this week, industry data provider CoinMarketCap tweeted that it would exclude some South Korean exchanges in price calculations due to the "extreme divergence in prices from the rest of the world" and for "limited arbitrage opportunity." The exchanges that were removed from the price calculation included Bithumb, Korbit and Coinone.

Last month, the South Korean Financial Services Commission said it was prohibiting cryptocurrency exchanges from issuing new trading accounts. If an exchange does allow new accounts, the government has the ability to take action to either stop trading or shut the exchange down, the commission said in a statement.

The commission added that, since much of the cryptocurrency trading was being done anonymously, users must use their real names.

The government also indicated it would closely monitor banks and would "swiftly" step in to limit fund flows into cryptocurrencies if necessary.

That news from the justice minister comes after the country's largest cryptocurrency exchanges were raided by police and tax agencies this week for alleged tax evasion, people familiar with the investigation told Reuters.