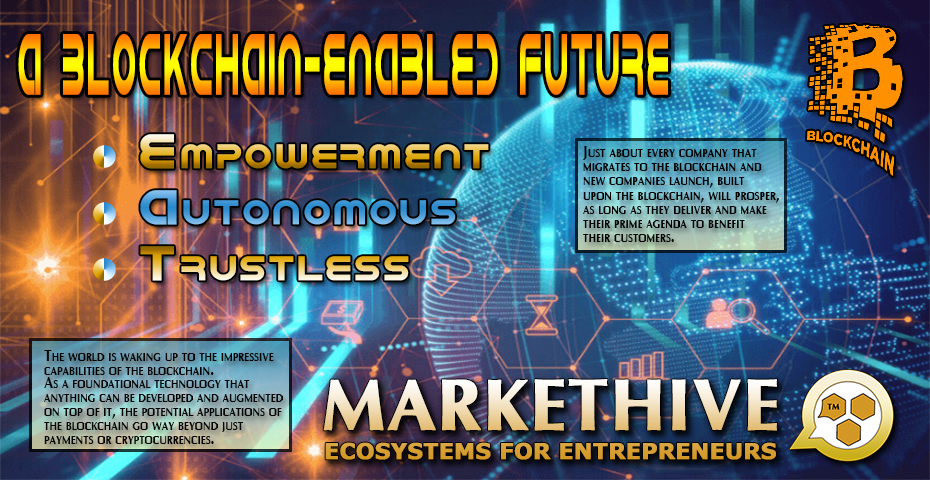 Blockchain technology is becoming a tidal wave of innovation and practical blockchain applications are becoming more mainstream. It’s moving beyond the hype of a couple of years ago and now bearing fruit, bringing real benefits to individuals and organizations.

Blockchain can be a tricky concept to get your head around, but to put it simply it is a tool that offers industries the ability to increase productivity and revenue, cut costs, ensure transparency and reduce wasted time and paperwork. It’s a new foundation underpinning our everyday tasks.

The pivotal advantage of blockchain is that there is no central hub. It has the transparency of a distributed ledger combined with the cryptographic security of an immutable data chain that makes this technology an ideal instrument for any business to exchange and validate information. Blockchain is a baseline technology that can be configured in various ways to suit different purposes and accommodate individual businesses across the board.

The Business Value With Blockchain

There are a few key areas where blockchain can add value to businesses and individuals,

Cost Reduction
Businesses no longer have to pour profits into logistics, intermediaries, and administrative paper trails. The blockchain can streamline supply chains, cutting out the middleman and banishing processes that slow efficiency and eat profits.

Revenue Creation
The blockchain does away with administrative and collaborative boundaries, allowing for innovative strategies that simply weren’t viable before the advent of Blockchain technology. This is a new freedom, where distributed ledgers and cryptography pave the way for new infrastructure and revenue models.

Consumer Impact
New business models provide the opportunity to meet the previously overlooked needs of consumers and communities. In the medical field, for example, where remote patient care and record-keeping may have been an issue in the past, blockchain advances provide ways to overcome those barriers using synchronized records and smart care devices on the network.

Freedom And Equality
Entrepreneurs, writers, and all types of creative artists are able to attain recognition, financial sovereignty, data privacy, and autonomy now that Blockchain has been utilized and is what drives the next generation social market network. Working online is at an all-time high and with the rise in social media and online marketing activity, blockchain makes it more equitable bringing true freedom for the individual.

Blockchain is already making waves in financial services, tech companies, healthcare, social market network, and digital media. Below are two infographics from Visual Capitalist that were inspired by a McKinsey study researching a combined industry analysis with more than 90 distinct use cases. 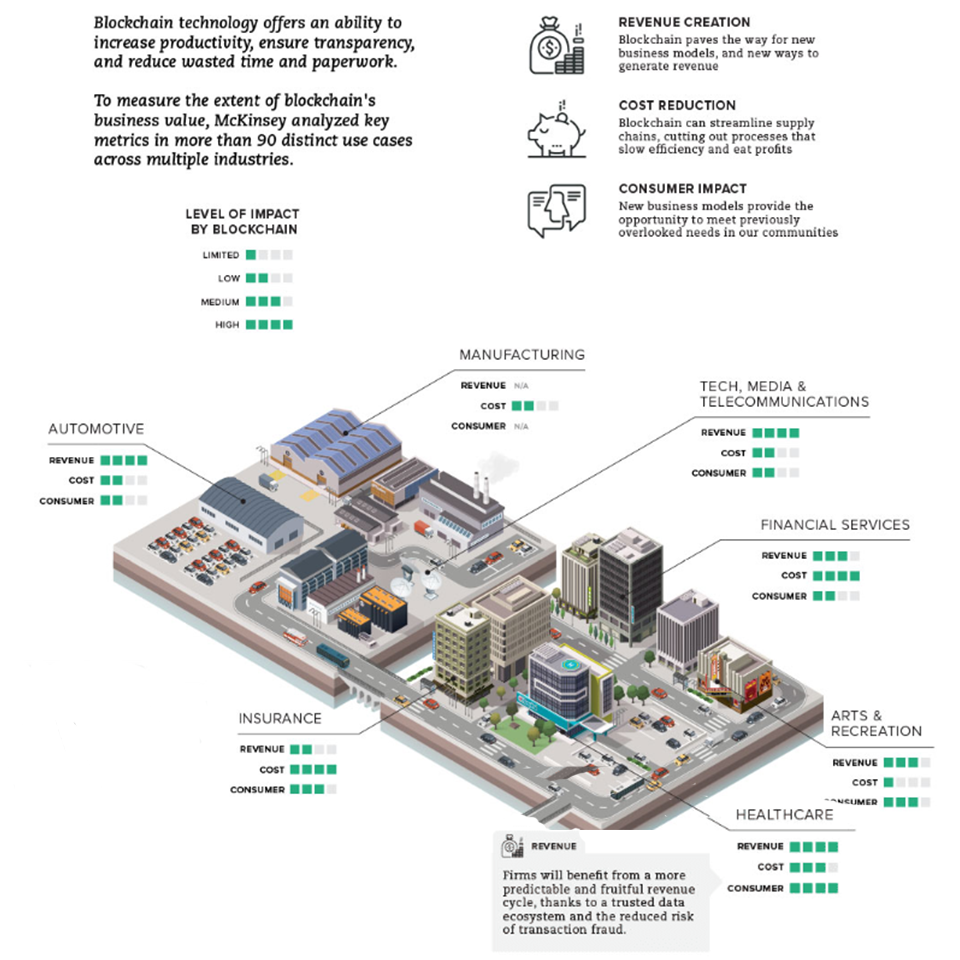 The Problem with Centralized Infrastructure

Today on the Internet, we must constantly trust one another with sensitive data, transactions, and records. Most of our interactions on the Internet run on centralized web servers, and massive amounts of user data often exist in a single database. Current databases are designed to be controlled by “trusted” admins who can read, alter, block, and even delete data. The centralized architecture of the Internet today is not only inefficient but vulnerable to censorship and targeted attacks by both hackers and internal bad actors.

The Value of Decentralization

The decentralized architecture of a blockchain is a global network of computers simultaneously running the software and validating the chain of transactions is what ensures that the transaction record is never compromised. Decentralization is critical as an architectural principle. It makes a blockchain network less likely to fail, harder to attack, and harder for bad actors to game the system.

As blockchain adoption spreads, it can become a driving force for promoting equitable societies, solving complex economic issues, and transforming how we live and work every day. 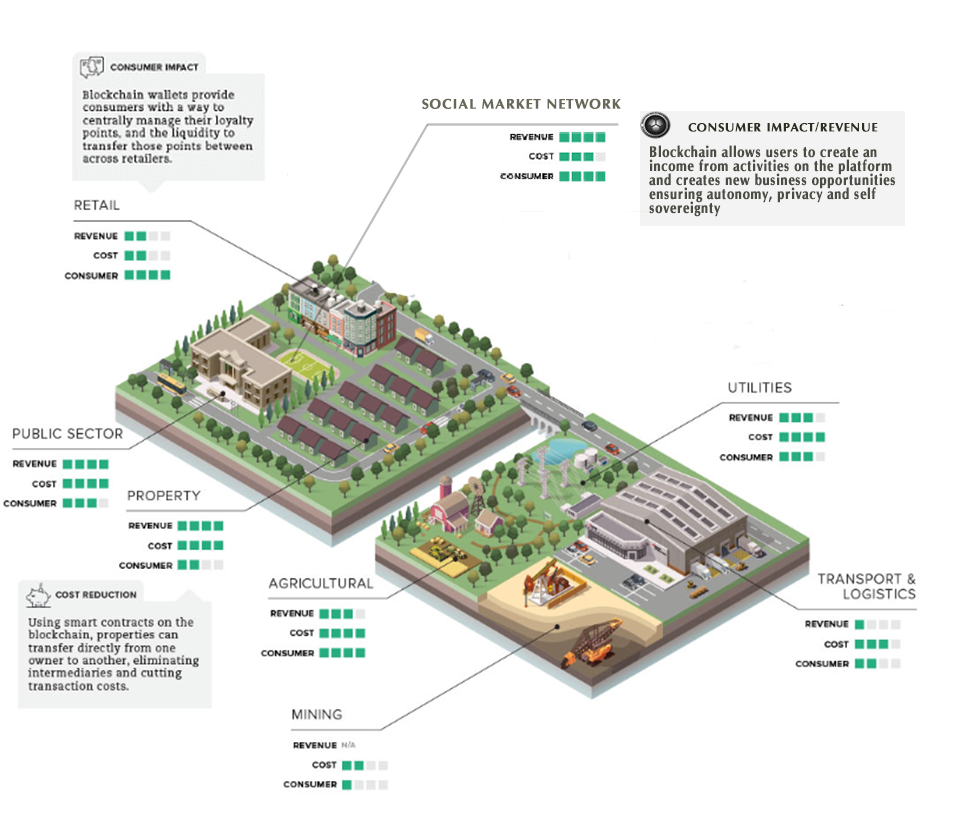 1. Smart Contracts
Blockchain and smart contract technologies function well in instances where legal contracts are required to maintain ownership rights and data privacy laws. These customizable, self-executing smart contracts on the blockchain can be easily managed by all parties. Smart contracts allow the decentralization of trustless transactions, worldwide and on a large scale. These can encompass different kinds of interaction, not only human-to-human but also human-to-machine and machine-to-machine.

Issues with ownership rights and royalties are commonplace within the entertainment industry. To navigate these issues, blockchain technology offers an unchangeable, traceable, real-time distribution, and reporting network for all involved. Ujomusic is one such application that is helping artists track their royalties worldwide. In the music industry, blockchain technology can bring artists and fans closer together, allowing listeners to pay micropayments to artists for listening to their songs directly.

Artists are not always paid in a reasonable time by major players who control the music industry, sometimes even waiting years to receive their earning for their work. By utilizing smart contracts, artists and studios can ensure that intellectual property agreements are met by other parties and smart contracts could be implemented that instantly pay artists once certain requirements are met.

Data privacy issues, massive scale surveillance, also known as dataveillance and lack of freedom of speech in the social media realm have become a distinct problem. Markethive, a social media, and inbound marketing platform have not only addressed these issues to empower the individual, but it has also utilized smart contract technology.

This is in the form of the Markethive Coin (MHV) which is a fungible cryptocurrency consumer coin, and the Incentivized Loan Program (ILP – Smart Contract). This enables all users to generate an income by just using the platform and the first-mover advantage of share acquisitions consisting of 20% of the company’s net revenue.  Markethive is a collaborative decentralized platform where its Entrepreneurial members can achieve viability and self-sovereignty. 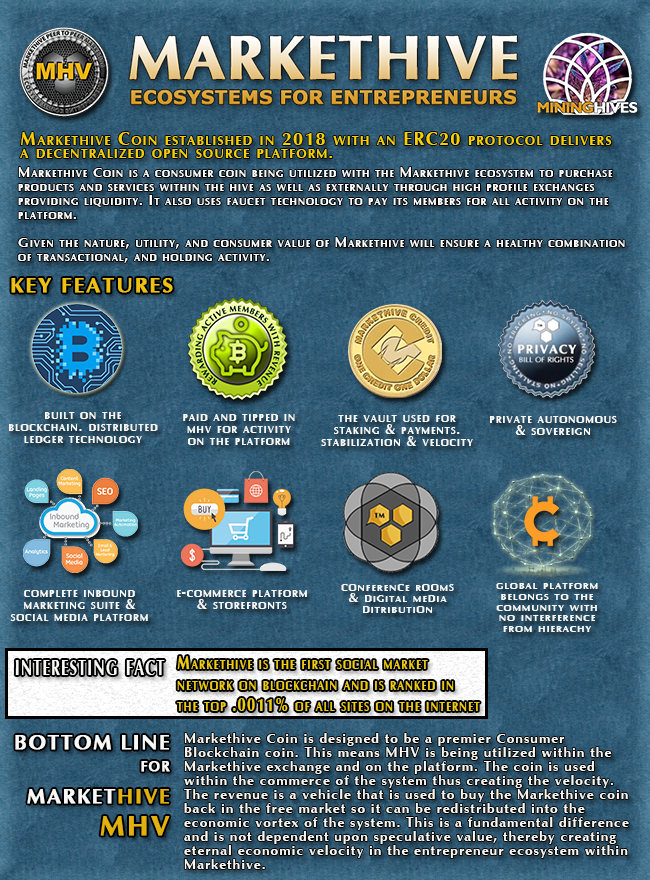 The Framework Of A Smart Contract

Smart contracts help you exchange money, property, shares, or anything of value in a transparent, conflict-free way while avoiding the services of a middleman. Built upon the blockchain, a smart contract is usually:

Using the Ethereum platform, smart contracts can be programmed using basic logic. On the most basic level, they can:

But most importantly, it is important to know that smart contracts are autonomous. They are not controlled by anyone — instead, they self-execute based on a set of instructions that two parties have agreed to, which is the code. 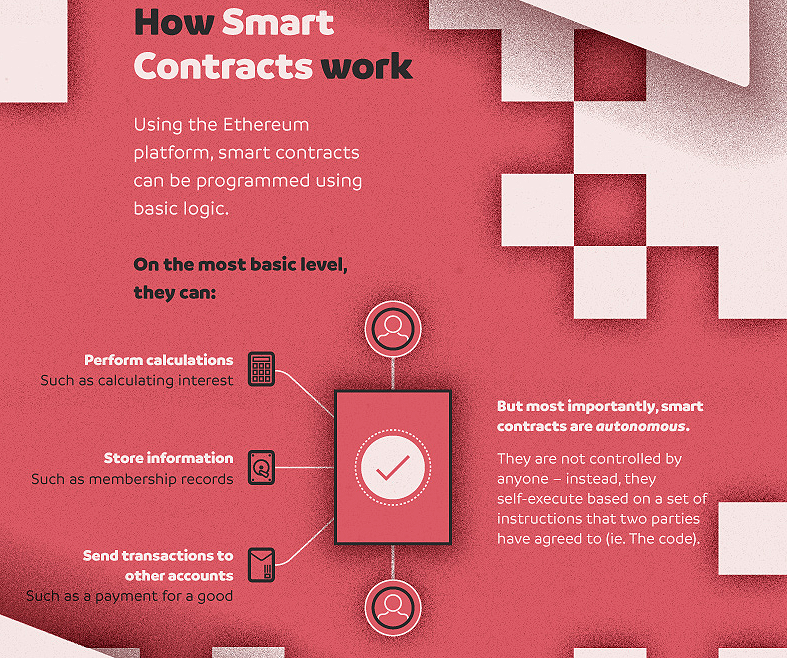 Smart contracts are appealing for a variety of reasons:

The blockchain is already a disruptive technology, and with these benefits, the potentiality of smart contracts is an amazing step forward for fairer, faster, more lucrative, and trustworthy systems for the companies, organizations, and individuals who embrace it.

2. Digital IDs
Reportedly, over 1.1 billion people worldwide still have no way to prove their identity according to the World Bank. Simultaneously, companies and financial institutions in both traditional and digital markets are being required to follow more stringent know-your-customer (KYC) initiatives.

Despite this, many providers are still not sufficiently meeting these standards; to further complicate things, regulations vary widely from jurisdiction to jurisdiction. Companies like IBM, Microsoft, and Markethive have migrated to the blockchain to securely and privately verify users.

Blockchain’s multi-factor verification process eclipses the levels of security that traditional password protection offers. Identities are secured for the decentralized web, for example, data sharing by third party companies has resulted in intrusive advertising. Blockchain-based identification means that no third parties can access your personal data without your consent.

The thing to be aware of is companies and platforms that claim to be blockchain-based but have a centralized identification protocol. There will be resistance from these entities that profit from the current system where people have no control over their personal data. Big companies manipulate data, so they are not very interested in decentralizing that type of information.

The existence of blockchain-based, yet centralized ID platforms could cause confusion among organizations and the general public. However, it's likely that the advantages of the best decentralized platforms possessing enough reach will inevitably make themselves known to the masses, so that eventually a few dominant platforms will emerge. As we move forward the majority will realize the advantages of a completely decentralized system that offers security, transparency, privacy, and gives control back to the users. 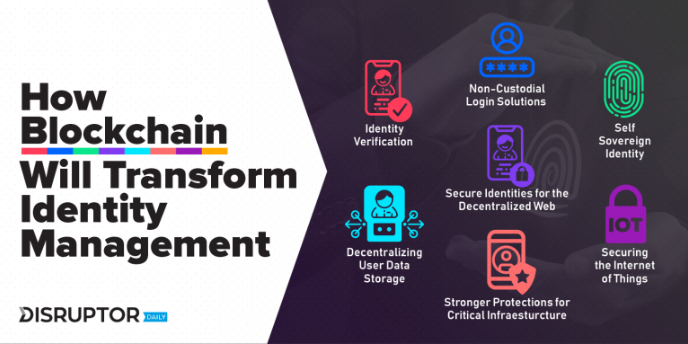 The world is waking up to the impressive capabilities of the blockchain. As a foundational technology that anything can be developed and augmented on top of it, the potential applications of the blockchain go way beyond just payments or cryptocurrencies. In fact, the blockchain will revolutionize how we interact with intellectual property, capital markets, insurance, healthcare, government, social media, and internet marketing, along with many other sectors.

Forward-looking companies that convert to the blockchain to improve the privacy and security of their data and create an environment that is unfettered from political and nefarious agendas, will be the winners on top.

Just about every company that migrates to the blockchain and new companies launched built upon the blockchain, will prosper, as long as they deliver and make their prime agenda to benefit their customers.