Lewis Burns is an artist, musician, teacher, philanthropist, and many more hats I am sure, but I do not know him personally.  We just connected recently on LinkedIn. 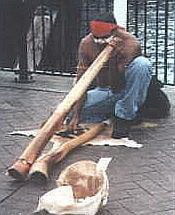 From his LinkedIn profile, it states,

"Lewis Burns is a Talbragar-Wiradjuri man born in Dubbo, NSW. He has been learning about his Aboriginal culture for as long as he can remember. He continues to practice and respect these life skills each day and still learns and grows from this ancient knowledge.

Lewis' love of his heritage is evident when you speak with him, and depicted even more in his Aboriginal crafts, traditional dancing, didgeridoo performances, mural paintings and teaching. He is very dedicated to sharing what he knows with others to help keep these customs alive. Lewis paints in traditional Aboriginal and contemporary styles.

He has exhibited and performed both within Australia and overseas with his handcrafted didgeridoos. Each piece of Lewis' artwork tells a story…..a story that will live on forever through the generations, as the artwork is handed down from one family to another"

So what can we learn about being an entrepreneur from him?

So, my suggestion for all new or experienced entrepreneurs is to purchase a didgeridoo from Lewis Burns, (they are extraordinarily beautiful), and one of his online courses on how to play it.  Then try to emulate him in everything you do, from your daily marketing, to your respect for your fellow man, and nature, and the divine in all things.

You will be a better person, and a better entrepreneur for it, and this world will also be a better place in which to live.

Note: See more on Lewis Burns on the social networks, and his website at: