The History of Ted Cruz and his Wife Heidi Cruz 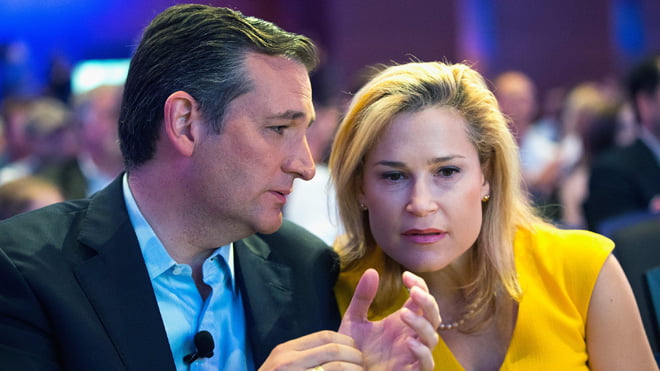 Sen. Ted Cruz (R-Texas) met his wife, Heidi (née Nelson), while working on the George W. Bush presidential campaign of 2000. Heidi Cruz is currently head of the Southwest Region in the Investment Management Division of Goldman, Sachs & Co. and previously worked in the White House for Condoleezza Rice and in New York as an investment banker for J.P. Morgan. Wikipedia listsHeidi Nelson Cruz as an “investment banker” and a “historical member” of the Council on Foreign Relations (CFR).

Heidi Cruz was a member of the CFR-sponsored Independent Task Force on the Future of North America, which was launched in October 2004. The Task Force advocates a greater economic and social integration between Canada, Mexico, and the United States as a North American region.

Comprised of a group of prominent business, political and academic leaders from the U.S., Canada and Mexico, the Task Force was organized and sponsored by the Council on Foreign Relations(U.S.), the Canadian Council of Chief Executives, and the Mexican Council on Foreign Relations. It was co-chaired by former Canadian Deputy Prime Minister and Minister of Finance, John Manley, former Finance Minister of Mexico, Pedro Aspe, and former Governor of Massachusetts and Assistant U.S. Attorney General William F. Weld.

Its main publication is the 70-page Task Force Report #53 entitled, Building a North American Community (May 2005). Heidi Cruz is listed as a member of the Task Force (page 9 of the report inPDF) and described as “an energy investment banker with Merrill Lynch in Houston, Texas” who “served in the Bush White House under Dr. Condoleezza Rice as the Economic Director for the Western Hemisphere at the National Security Council, as the Director of the Latin America Office at the U.S. Treasury Department, and as Special Assistant to Ambassador Robert B. Zoellick, U.S. Trade Representative.”

1. ESTABLISH A COMMON SECURITY PERIMETER BY 2010

“The governments of Canada, Mexico, and the United States should articulate as their long-term goal a common security perimeter for North America. In particular, the three governments should strive toward a situation in which a terrorist trying to penetrate our borders will have an equally hard time doing so, no matter which country he elects to enter first.”

“The three countries should develop a secure North American Border Pass with biometric identifiers. This document would allow its bearers expedited passage through customs, immigration, and airport security throughout the region.”

Specific recommendations under this plan include:

“Harmonize visa and asylum regulations, including convergence of the list of “visa waiver’’ countries;Harmonize entry screening and tracking procedures for people, goods, and vessels (including integration of name-based andbiometric watch lists);By 2010, “Lay the groundwork for the freer flow of people within North America. The three governments should commit themselves to the long-term goal of dramatically diminishing the need for the current intensity of the governments’ physical control of cross-border traffic, travel, and trade within North America. A long-term goal for a North American border action plan should be . . . the elimination of most controls over the temporary movement of these travelers within North America.“

“Security cooperation among the three countries should also extend to cooperation on counterterrorism and law enforcement, which would include the establishment of a trinational threat intelligence center, the development of trinational ballistics and explosives registration, and joint training for law enforcement officials.”

Note: Now I’m beginning to “get” why U.S. police departments are hiring non-US citizens as officers!

5. SPREAD THE BENEFITS OF ECONOMIC DEVELOPMENT

“NAFTA has transformed Mexico, but it has also deepened and made much more visible the divisions that exist in the country…. The gap in wages has led many Mexicans to travel north in search of higher incomes and better opportunities. For the past three decades, Mexico has been the largest source of legal immigrants to the United States, and Mexican-Americans make increasingly valued and growing contributions to the life of the United States and, through remittances, to their families at home. Mexico is also the leading source of unauthorized migration, with attendant economic and security problems in both countries and untold hardships for Mexican migrants. Over time, the best way to diminish theseproblems is by promoting better economic opportunities in Mexico.”

Note: In other words, more socialist “spread the wealth”!

“With tariff barriers virtually eliminated, and the outlines of a North American economy visible, the time has come to take a more comprehensive approach to strengthening the economic prospects for citizens in all three countries. The first step is to encourage convergence in the most-favored-nation tariff rates each partner charges on imports from outside North America. Next, the governments should reduce the remaining nontariff barriers to the flow of goods and services, and address problems arising from charges of price discrimination and subsidization by competitors in North America. Finally, they should coordinate their approach to unfair trade practices by foreign suppliers to the North American market. The ultimate goal should be to create a seamless market for suppliers and consumers throughout North America.”

“To make the most of the impressive pool of skill and talent within North America, the three countries should look beyond the NAFTA visa system. The large volume of undocumented migrants from Mexico within the United States is an urgent matter for those two countries to address. A long-term goal should be to create a ‘North American preference’—new rules thatwould make it much easier for employees to move and for employers to recruit across national boundaries within the continent…. Canada and the United States should consider eliminating restrictions on labor mobility altogether and work toward solutions that, in the long run, could enable the extension of full labor mobility to Mexico as well.”

Specifics on how to create a North American free flow of labor include:

By 2010, streamline immigration and labor mobility rules to “enable citizens of all three countries to work elsewhere in North America with far fewer restrictions than immigrants from other countries.”“Special immigration status should be given to teachers, faculty, and students in the region.”“Move to full labor mobility between Canada and the United States” by “eliminating all remaining barriers to the ability of their citizens to live and work in the other country.”

“I support the Task Force report and its recommendations aimed at building a safer and more prosperous North America. Economic prosperity and a world safe from terrorism and other security threats are no doubt inextricably linked. While governments play an invaluable role in both regards, we must emphasize the imperative that economic investment be led and perpetuated by the private sector. There is no force proven like the market for aligning incentives, sourcing capital, and producing results like financial markets and profit-making businesses. This is simply necessary to sustain a higher living standard for the poorest among us—truly the measure of our success. As such, investment funds and financing mechanisms should be deemed attractive instruments by those committing the capital and should only be developed in conjunction with market participants.”

Now you know why, despite his blustering against Obama’s executive amnesty for millions of illegal aliens in this country, on March 27, 2015, Ted Cruz indicated he “remains open to a path to legal status for undocumented workers.”

Born in Canada of an American citizen mother and a Cuban father, Ted Cruz held dual Canadian-U.S. citizenship. But it was only when the Dallas Morning News in August 2013 pointed out his dual citizenship that Cruz finally applied to renounce his Canadian citizenship — which meant that in 2012 when Cruz had run for and was elected a U.S. senator, he was a Canadian citizen. On May 14, 2014, Cruz finally ceased being a citizen of Canada. See “Republican Sen. Ted Cruz announces presidential campaign, but is he eligible?