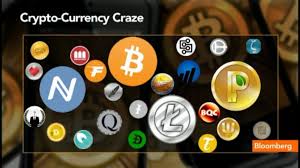 In the late 1990s, as investors woke up to the promise of the internet, shares in any company with dot.com after its name soared to giddy heights.

Then the bubble burst.

Now there are warnings of another technology investment bubble — this time related to the fascination with crypto-currencies such as Bitcoin.

On the Tech Tent podcast this week, we examine the phenomenon of ICOs — Initial Coin Offerings — which have seen over $1bn raised so far this year from investors who get little more than a token and a vague promise of involvement in a new business.

The term ICO — designed to mirror the IPO that sees a firm issue shares and float on a stock exchange — seems to mean different things to different people. Early versions were simply ways of getting a new crypto-currency off the ground, but now many are promising to use the blockchain technology that underpins Bitcoin and similar currencies to create businesses.

Among the ICO projects listed by Smith + Crown, which researches the crypto-currency scene, is a business raising money to create the world's most lucrative lottery based on blockchain, and another that promises to rent out high-quality office space using digital tokens.

On Tech Tent, we talk to an entrepreneur who is boldly going into uncharted territory with this new investment technique. Pavlo Tanasyuk is the founder of Spacebit, which aims to create what he calls "a distributed space agency unshackled by state or national sponsorship".

Next month, he will invite investors to take a stake in this venture, which he describes as a crypto version of Elon Musk's Space X. He will only accept payment in Bitcoin, Ethereum or other crypto-currencies and in return backers will get tokens and a role in deciding how the business is run.

But the finance blogger Frances Coppola has compared ICOs to the tulip fever of the 16th Century and other investment bubbles.

"The enthusiasm for ICOs is coming off the back of the Bitcoin and Ethereum booms," she says.

She warns that such schemes are completely unregulated, and fears that many who invest in them simply won't understand what they're getting into.

"There will be scams in this — I'd be astonished if regulators aren't looking at this."

Even Pavlo Tanasyuk concedes there is plenty of risk attached to this kind of investment. "Ninety-five per cent won't deliver — but we will. It's important to set an example. We're doing something real and have a strong management team in place."

When the dot.com bubble burst, it became clear that many investors had not really understood what the firms they were backing actually did or the nature of the technological challenges they faced. Today, the world of crypto-currencies and the blockchain looks even more impenetrable.

Consider this description of one project, Neverdie, which has already raised more than $2m (£1.5m) in an ICO: "A virtual reality infrastructure platform that bridges virtual worlds with popular MMORPGs [massively multiplayer online role-playing games] on the Ethereum blockchain."

Doubtless those who have bought the coins that are meant to fund this vision have read the white paper describing the project, and the disclaimer at the end: "Neverdie Coins and Teleport Tokens do not represent ownership in any real-world companies. These tokens are designed to activate virtual utilities."

Real money is going into a virtual world and if it disappears in a puff of virtual smoke, no regulator will be there to cry foul. Let's hope those who back these kind of ventures are going into them with their eyes open.