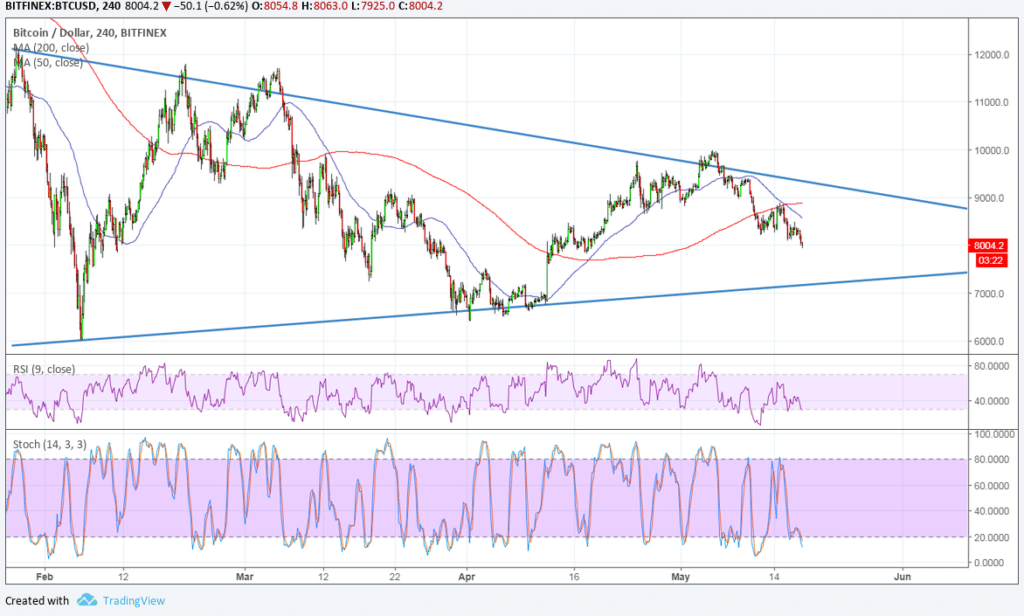 Bitcoin continues to slide and may be setting its sights on new last month's lows.

Bitcoin has formed higher lows and lower highs on its 4-hour time frame to create a symmetrical triangle. Price is on its way to the bottom around the $7,000 level.

The 100 SMA has crossed below the longer-term 200 SMA to signal that the path of least resistance is to the downside. In other words, the selloff could continue from here and support might even break. Note that the chart pattern spans $6,000 to $12,000 so the resulting downtrend could be of the same height.

RSI is on the move down so bitcoin could follow suit while sellers have the upper hand. Stochastic is also moving down to signal that bearish pressure is in play. If support holds, though, bitcoin could make another move to the top at $9,000 or even attempt to break higher.

Investor sentiment appears to have turned sour as bitcoin has been unable to break out of its slump, drawing even more selling pressure. Traders could keep holding out for positive industry updates before reviving their long positions.

Meanwhile, the dollar has been on a tear for the most part of the week, drawing strength from both fundamentals and risk sentiment. Geopolitical risk has supported the flight to safety while a few upside data points have supported tightening expectations and US bond yields, making the dollar the preferred safe-haven currency.

For now, it looks like bitcoin is still reeling from the selling of Mt. Gox units and the ongoing investigation into South Korea’s UPbit. This has revived regulatory concerns and once again put the trust of bitcoin exchanges to question.

Looking ahead, this slump could go on until there’s another set of developments in the industry. For now, the focus seems to be on institutional investors looking to trade products based on digital assets as firms and exchanges prepare to include these in their offerings.