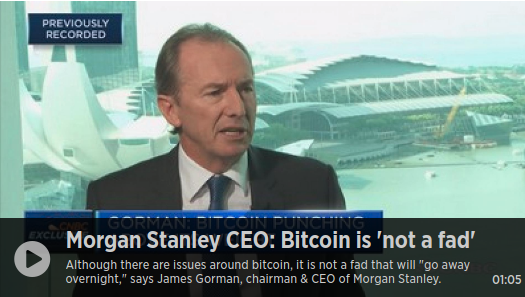 Bitcoin is getting more attention than it deserves, but the phenomenon is not going away overnight, according to Morgan Stanley Chairman and CEO James Gorman.

"Something that goes up 700 percent in a year — it's by definition speculative," he said. "So anybody who thinks they're buying something that it's a stable investment is deluding themselves."

"It might go up another 700 percent, but it could easily not," Gorman added.

Gorman's stance on bitcoin appeared slightly less negative than some of his peers on Wall Street. For example, JPMorgan Chase CEO Jamie Dimon predicted if "you're stupid enough to buy [bitcoin], you'll pay the price for it one day." Meanwhile, BlackRock CEO Larry Fink called the cryptocurrency "an index of money laundering."

The criticism from financial luminaries has done little to deter bitcoin's ascent. On Thursday morning, the cryptocurrency traded at $7,141.03, according to Coindesk data. It had begun the year at only about $1,000 per token.

Gorman added that bitcoin is "punching above its weight" and the cryptocurrency "doesn't quite deserve the attention it's getting."

Previously, the Morgan Stanley CEO described cryptocurrencies as "more than just a fad."

He explained to CNBC that bitcoin's growing acceptance and usability meant it was "not going away overnight."

But there are issues and uncertainties surrounding the cryptocurrency.

"Is it a needed new form of stored value? I'm not so sure," he said, adding it was also unclear if the regulators and central banks would watch bitcoin's growth from afar or become involved.

Still, the bank chief grappled with digital money's reputation for facilitating criminality: "Does it support people who want to use currencies on anonymous basis for wrong purposes? Absolutely," Gorman said.

Proponents of bitcoin predict the cryptocurrency will continue breaking records amid its growing acceptance among users to carry out financial transactions. One analyst even predicted bitcoin could top Apple's market cap in five years.