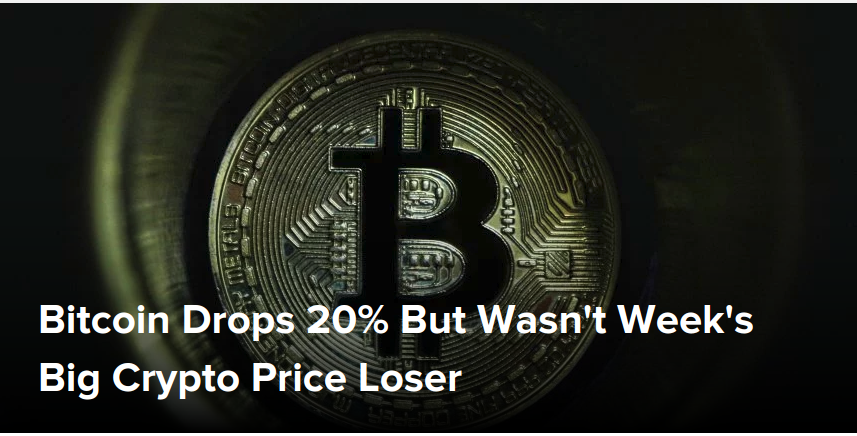 If February was bad for the crypto market, March hasn't fared better.

Bitcoin's (BTC) repeated failure to beat inverse head-and-shoulders neckline resistance saw bears come in full force, pushing prices to a one-month low of $8,371 Friday. As of writing, the world's largest cryptocurrency by market capitalization is trading at $8,970, according to CoinDesk's Bitcoin Price Index.

But the 28 percent drop from BTC's March 5 high of $11,660 had broader implications, pushing the market capitalization below $350 billion for the first time since Feb. 14.

The sell-off in BTC seems to have roiled broader markets, a trend evident by the fact the top 25 cryptos by total value are all reporting weekly losses
As such, while bitcoin has depreciated by 20.98 percent week-on-week, it's notably not the top loser of the week, with TRON, ICON and IOTA ranking higher on bigger losses.

Rank as per market capitalization: 22

So, despite positive news, such as a thumbs up from influential litecoin founder Charlie Lee, the endorsement failed to keep the nano bid amid a broader market sell-off.

As of writing, the cryptocurrency is seen changing hands at 0.0011 BTC (about $10) on Binance. The recovery from the intraday low of BTC 0.001008 (roughly $9) in the wake of oversold conditions (as shown by the relative strength index) has neutralized the immediate bearish outlook.

However, only an upside break of the descending channel would signal a bearish-to-bullish trend change.

Rank as per market capitalization: 15

After rocketing to records earlier this year, TRON showed signs it hasn't quite been able to recover from the backlash of severe criticism.

This week, TRON even reached a strategic partnership with Trip.io to advance blockchain applications in the travel industry, and announced a strategic cooperation with BitGuild (a blockchain game platform)

Elsewhere, TRON Founder Justin Sun went so far as to reveal plans to accelerate the launch of main net.

Still, the positive news flow failed to put a floor under TRON prices. TRX/USD fell to $0.03 yesterday — its lowest level since Feb. 8.

Rank as per market capitalization: 24

February's top loser hasn't had a good start this month

Prices for ICON's ICX token fell to $2.16 on Binance — the lowest level since Dec. 22, with a series of lower highs and lower lows on the daily chart indicating the bears are in control of the market.

However, short-term oversold conditions as shown by the relative strength index could yield a minor corrective rally.