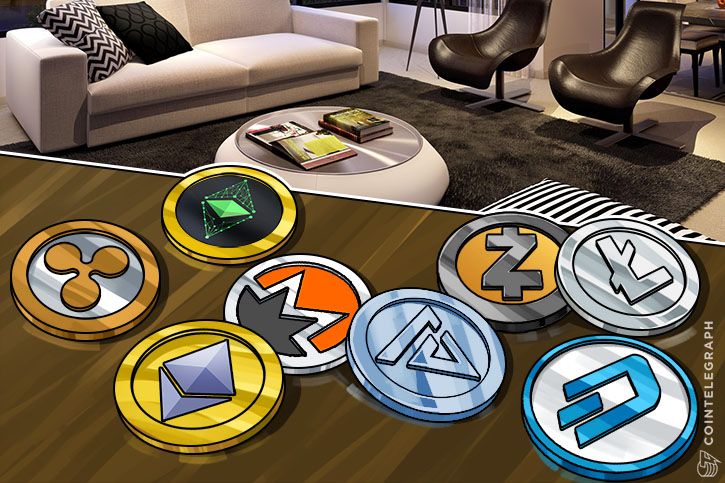 Blockchain currency is revolutionizing money. Since Satoshi Nakamoto unveiled his cryptocurrency in 2008, we’ve witnessed a proliferation of digital cash companies and codebases. Utilizing his public, distributed ledger, dozens of promising currencies have emerged. Only a select few have proven themselves as true contenders to Bitcoin, however.

Here are the top 10 altcoins on CoinMarketCap (note that the list is changing constantly, especially in the tail part, with other altcoins like MaidSafeCoin, Golem and Augur playing musical chairs with others):

J.P Morgan Chase, Microsoft and Intel allied in order to create the fiercest rival to Bitcoin in circulation today: Ethereum. The main purpose of the endeavor was to program binding agreements into the Blockchain itself. This incarnated into the now-popular smart contract feature.

Interestingly, Ethereum is not just a currency. It’s a Blockchain platform powered by the Ether cryptocurrency. The New York Times describes the technology as “a single shared computer that is run by the network of users and on which resources are parceled out and paid for by Ether.”

Ripple attracted a great deal of venture capital during its inception. The Google-backed altcoin startup managed to pull in upwards of $50 mln from banking institutions, gathering an impressive $90 mln in total funding. Ripple is unique in that it allows for transacting with any unit of value, from fiat currency to frequent flier miles.

“Ripple provides global financial settlement solutions to enable the world to exchange value like it already exchanges information giving rise to an Internet of Value (IoV). Ripple solutions lower the total cost of settlement by enabling banks to transact directly, instantly and with certainty of settlement,” reads the company’s copy on their official website.

Initially a middling contender, Ripple has gained momentum in the cryptocurrency market, seeing a marked surge earlier this year. In fact, Ripple experienced a 100 percent increase in value within a 24-hour period in late March.

Former Google engineer Charles Lee created this altcoin in an effort to improve upon Bitcoin. Namely, the speed to generate a new block is improved dramatically. Transactions are much faster. By the same token, however, this speed makes Litecoin’s Blockchain larger and more prone to producing orphaned blocks.

Dash, a combination of the words “digital” and “cash,” is the Internet’s cash-in-hand. Dash is quick. Its transactions are instant. “Your time is valuable. InstantSend payments confirm in less than a second,” Dash claims. By comparison, Bitcoin’s transactions can take up to an hour to process.

NEM is written in Java; built on an entirely new codebase separate and apart from Bitcoin’s open-source code. There are a few other intriguing differences from Bitcoin as well. In NEM, you harvest rather than mine. It’s essentially the same as mining in Bitcoin, only that multiple people profit — albeit in much smaller quantities — from a generated block.

NEM introduced the proof-of-importance algorithm to the digital ledger. A user’s wealth and number of transactions are used to timestamp transactions.

NEM has seen rapid growth in its valuation since the beginning of 2017 as the altcoin is currently being embraced in Japan.

A parallel Ethereum platform exists and sustains a sizeable usership with a market cap hovering just below $430 mln.

Why do two versions of the same platform exist?

The Ethereum community fractured when a disagreement over how a technically legal theft of funds should be handled. The majority of users wished to change Ethereum’s code in order to get the lost funds back. A minority believed that Ethereum should not be tampered with or altered by third parties. Even in cases of users exploiting the smart contract feature to trick others, the Blockchain must remain “immutable.” Thus, the minority created the Classic version of Ethereum, which still survives and thrives.

Monero is geared toward those who desire greater anonymity. The cryptocurrency allows you to “send and receive funds without your transactions being publically visible on the Blockchain.” Transactions are completely untraceable due to Monero’s leveraging of ring signatures. Unfortunately, because of Monero’s emphasis on privacy, it has seen adoption by the darknet and other criminal organizations.

Zcash, like Monero, offers greater privacy to users. Unlike Monero, transactions are shielded rather than made completely private. Meaning, the details of the transaction itself, such as the users involved and the amount traded, are hidden. Zcash does this by using a “zero-knowledge” proof that allows for parties to exchange funds without revealing each other’s identity.

Decred’s primary aim is to focus on “community input, open governance and sustainable funding and development.” The currency melds proof-of-work and proof-of-stake mining algorithms to ensure a minority of users do not own the majority of the funds and that decisions are led by the community rather than a handful of developers or early investors.

PIVX stands for Private Instant Verified Transactions. Another open-source decentralized Blockchain currency, it is built upon Bitcoin Core. Like Zcash and Monero, PIVX boasts its heightened privacy and security.

“We believe that you have the right to exchange privately and securely, without interference from corporatocracy pressures, governmental influences, prying eyes, and nefarious individuals and movements,” PIVX contends.

PIVX is highly volatile, experiencing massive spikes in trading volume and valuation as of March of this year. Again, because of the currency’s emphasis on privacy, PIVX is susceptible to criminal activities.

Cryptocurrencies, Bitcoin and the altcoins it has spawned, may bring about a new global economy. They allow us to transact in a peer-to-peer fashion, without third-party bodies governing us. Bitcoin introduced the Blockchain, but other developers are quickly improving upon Nakamoto’s idea. Some currencies have focused on speed, as is the case with both Ripple and Litecoin. Others have honed in on privacy, currencies like Zcash going so far as making all transactions private and untraceable. Each altcoin comes with its own strengths and weakness. Surely, we’ll discover more as time goes on. For now, these 10 currencies are at the top. Their fate could turn, however, at a flip of a coin.