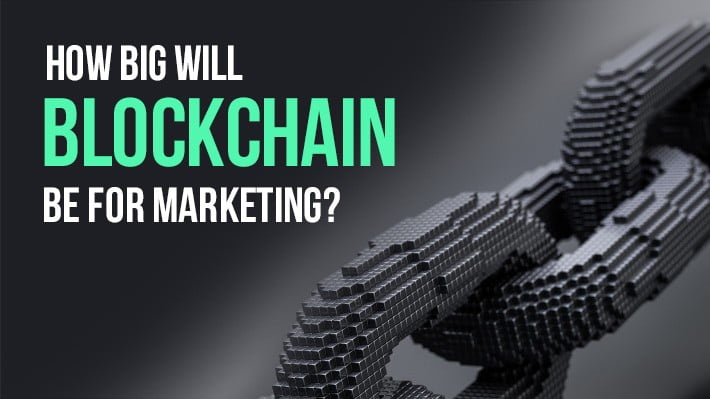 Out of the blocks — but how big will blockchain be for marketing?

If you work in marketing then you've almost certainly heard of blockchain — and you've almost certainly heard that it's going to be big. You've been told that it could transform the way that both your business and your profession work. However, the chances are nobody's told you exactly how this is going to happen. That's because, at this very early stage in its development, nobody's fully clear about exactly what blockchain is capable of.

While 5G, Artificial Intelligence (AI) and both virtual and augmented reality are evolutions of technologies that have existed for more than 50 years in some cases, blockchain is genuinely new. The first blockchain was only created in 2009 as part of the development of the cryptocurrency Bitcoin. It's the wild ride of cryptocurrencies that has generated a lot of heat and noise around blockchain technology. However, once you move beyond those virtual currencies, that heat and noise is massively greater than blockchain's actual use in business — so far, at least.

According to Gartner’s 2018 CIO survey, only 1% of CIOs said they had adopted any kind of blockchain within their organisations, and only 8% were planning or actively experimenting with this technology.

So what actually is blockchain, and is it really as important as many people have made out?

The definition of blockchain
A blockchain is a type of distributed ledger, which records a series of transactions as digital records or ‘blocks’. Its point of difference is that these blocks are inextricably linked despite not being stored in the same place. This makes the records secure, unique and permanent. They can’t be altered without the changes themselves being recorded.

Blockchain was a breakthrough technology for cryptocurrencies, because it could be used globally while preventing anyone spending the same unit of currency twice. For a business, it creates a way of maintaining a unique, indisputable history of all its interactions with different parties: suppliers, partners, customers — and audiences for its advertising.

How can businesses use blockchain?
Proponents of blockchain have latched on to this transparency as a solution to every problem facing businesses, from supply chain management to micropayments. However, as with so many breakthrough technologies, blockchain can't bring about these changes by itself. It's the systems built around it that will drive real impact. And this is particularly true of blockchain's applications for marketing.

Certain applications are straightforward. For example, a company could use blockchain to store details of whether its customers have given permission to be contacted, and what about. Customers who then received messages they believed they hadn’t signed up for could check their permissions, knowing that the details of the original transaction couldn’t have been changed.

Could blockchain restore transparency to digital advertising?
Many people see blockchain as part of the solution to digital advertising’s problems with fraud and brand safety. The rise of programmatic ad buying led to a focus on the person (or rather, the bundle of cookies) arriving on a site ready to be advertised to. Attention moved away from the context in which the ads were appearing, which resulted in ads being shown next to inappropriate — and sometimes damaging — content.

At the same time, the complexity of the supply chain for ad inventory (networks selling to other networks) made transparency all but impossible. As Mark Syal, head of product at media agency Essence, puts it, no-one has 100% certainty of the provenance of their digital media buys. Blockchain could help here, allowing media buyers to follow the transactions that resulted in them being offered a particular ad slot, and to assess whether it’s appropriate. Because the online advertising landscape is so fragmented, it would be a huge task to implement a blockchain-based system across the board. But if advertisers like Procter & Gamble and Unilever continue to press the digital advertising industry to clean up its act, self-regulation could make such a system a reality.

Transforming data quality — and data ownership
It's not just the management of advertising data that blockchain could change, though. Potentially far more significant are the implications of the technology for ownership and control of personal data. In short, blockchain could take this out of the hands of brands and media owners — and put it into the hands of the individuals whom the data relates to.

The first advances are likely to be around digital identity, with blockchain letting people prove they are who they say they are. At the moment, this is mainly seen as a way of improving the customer experience. Blockchain could remove the need to re-enter data as you pass from one department’s database to another, for example, making the whole path to purchase consistent and coherent.

Beyond this though, is the possibility of blockchain enabling what is known as the personal information economy (PIE). If blockchain can allow verification of personal identity, that could be extended to include storing your electricity consumption data, or how you use your mobile phone, so that you can share that data with other providers when shopping around for a better deal. You keep your data with you as you travel around the digital landscape, deciding who can use it, when and how.

In this world, brands wouldn’t collect data about you to try to make the marketing messages they send you more relevant. Instead, you would hold your data and allow your chosen brands to access it when you wanted to make a purchase. Instead of being widely available for any algorithm to use, your data would be exchanged only with brands you trust for purposes you’ve agreed to. Blockchain could build consumer trust by maintaining a robust record of who has used data and for what purpose. If brands want to use such data to deliver personalised digital experiences, they have to earn the right to do so first.

Aspects of this huge transformation are already happening. The UK government’s Midata project has made financial services companies and energy suppliers store their data in a form that customers could access and share with other providers. One of the major barriers to large-scale adoption of the personal information economy has been the technology required to create secure, personal data stores. If blockchain solves that problem, then the relationship between people and data could be transformed, and marketing could be on the verge of a revolution.