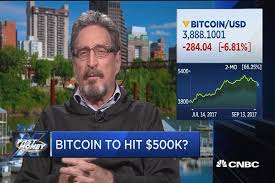 Dimon on Tuesday called bitcoin a "fraud" that will eventually blow up. McAfee, whose company MGT Capital Investments mines the cryptocurrency, said he respects Dimon and people in his position "are not idiots," but he challenged Dimon's criticism.

Miners invest "massive" amounts of supercomputing power and electricity in creating bitcoins, McAfee said. Surely then, there is value in creating a bitcoin, he added.

Bitcoin has faced scrutiny because it is highly volatile. The cryptocurrency was last trading Wednesday evening at more than $3,870.

"And the fact that bitcoin is consistently growing in its use and its value has to say something," McAfee said. "Sure it will rise and fall as all new technologies are. But at the same time, it is certainly not a fraud."

McAfee made a lewd bet on Twitter earlier this summer that bitcoin would reach $500,000 within three years. On Wednesday, he said people called bitcoin a bubble that was bursting at one point, and then it smashed their expectations. Plus, the long-term trend of bitcoin has been consistently up, McAfee added.

McAfee is known for his pioneering McAfee Security antivirus software products, now part of Intel, as well as his extreme comments to the media and run-ins with the law. In July, McAfee settled a lawsuit with Intel over his right to use his name on other products. He agreed not to use his name, trademark his name or use certain phrases including his name.