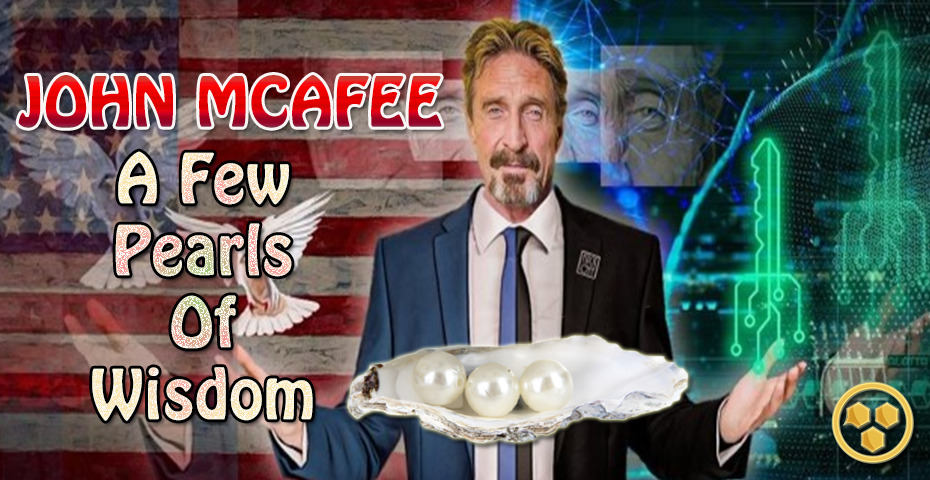 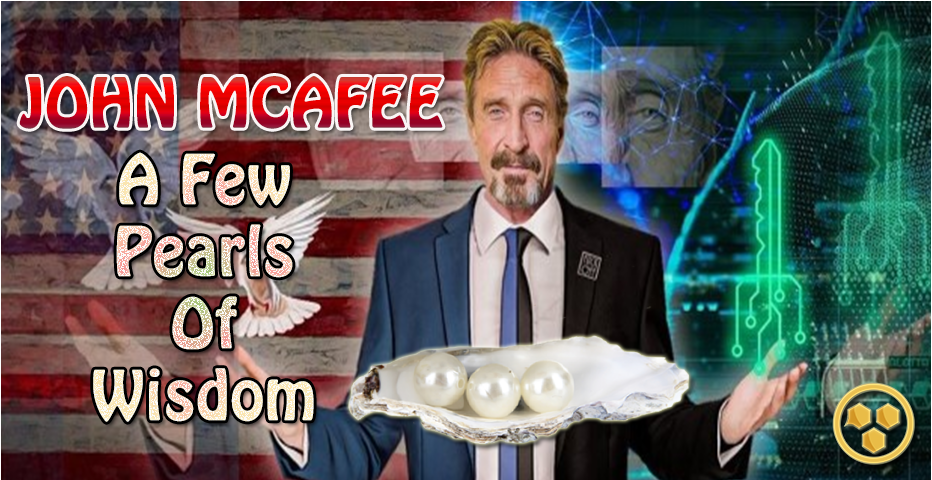 John McAfee, now 74 years old, a libertarian, a computer whizz and cybersecurity guru who became a household name with the McAfee Antivirus software, now living a bohemian and somewhat quiet lifestyle somewhere in this world.  He communicates from a faraday cage, where no signals from a device can get out of the foil-lined cage, therefore making him and his message to his followers and anyone else who’ll listen, untraceable.

The last six months of John McAfee’s life have been interesting, to say the least. John McAfee, accompanied by his wife, Janice, was chased out of the Bahamas for ruffling feathers after he accused the Bahamian anti-corruption czar, Paul Rolle, of corruption. McAfee pointed out the reason for going into exile in the Bahamas is that he couldn’t be easily extradited back to the US from there because the Bahamas does not have an income tax. His argument was that “tax evasion is not a crime in the Bahamas”. Adding to that he has mentioned the possibility of a US strategy that is to “unlawfully collect” him 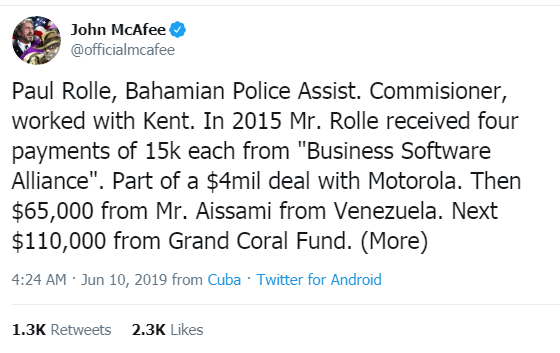 Subsequently, they arrived in Cuba where the authorities of Cuba notified McAfee that the US government asked them for the fugitive’s return to the United States. Instead, the Cuban Government stipulated they would prefer if McAfee and his wife left Cuba and gave them 72 hours to leave their country.

From there they spent a few days at sea, then ventured into the Dominican Republic where they were surrounded by soldiers as soon as they reached the Port. They did manage to elude them once more and now live in an undisclosed location.  According to McAfee, these events were caused by the CIA’s attempt to get him back to the states and answer to charges primarily for tax evasion. McAfee considers the CIA to be “the great monster at the heart of America”. He has also previously warned that there’s an attempt by the U.S. to “silence” him. 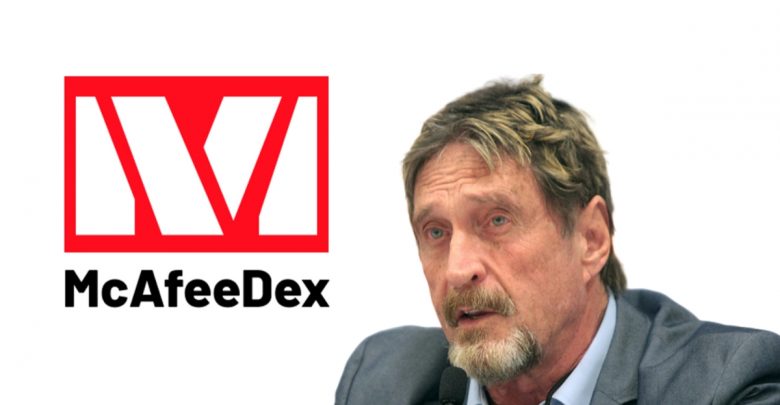 In spite of all this, John McAfee still manages to get his decentralized exchange up-and-running. The McAfeeDex, a completely distributed exchange means it cannot be totally shut down. It is still in beta and it already has over 30 different portals, different domains and services globally make it impossible to shut down.

By the end of the year, there will be over 100, as more and more tokens join the exchange, the latest being Tron and Binance and EOS will follow.  McAfee’s motivation to create the DEX was to challenge the SEC. He wanted to build something the government could not interfere with.  His objective is to solve the cross-chain issue and by the Q2 of next year it will be able to execute true cross-chain transactions allowing interoperability.

Cross-chain protocols, or so-called atomic swaps, allow you to exchange one cryptocurrency for another, even between two different blockchains, without the help from a third party. It's basically a variation of smart contract technology and hash time-locked contracts. 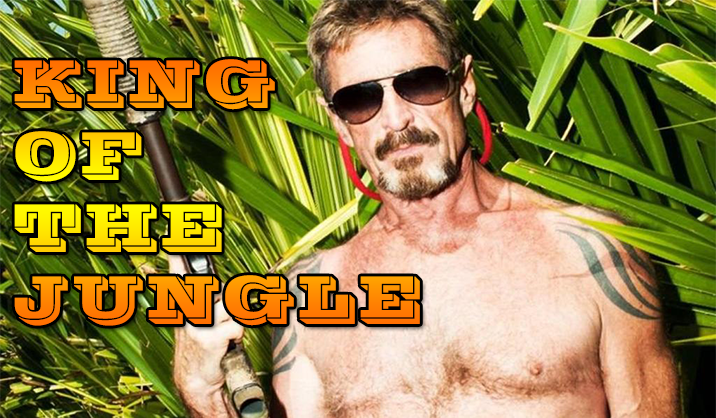 McAfee Movie — King Of The Jungle

He continues to communicate his out-of-the-box thoughts, philosophies, knowledge, and beliefs to the world and seen as an authoritative figure in the Blockchain and crypto realm, along with his avid stance on privacy and freedom. Being an interesting and controversial character, Hollywood is making a movie based on a 3-week segment of his life while in Belize back in 2011.

The movie centers on Wired magazine investigator Ari Furman, who accepts what he thinks is a run-of-the-mill assignment to interview McAfee. Once Furman arrives in Belize, however, he finds himself pulled into McAfee’s escalating paranoia as he becomes a person of interest in the murder of a neighbor.

Michael Keaton was set to play the part of McAfee however, There are rumors that he has since exited, which is a shame. I thought he would’ve made a sensational John McAfee. Zac Efron will be playing the role of the journalist, Ari Furman which was originally assigned to Seth Rogan. It will be interesting to see who will play McAfee. The project has been in the works for several years now and the producers are hoping to finally start shooting in early 2020.

A Few Pearls Of Wisdom From John McAfee

If you have been following McAfee you would know he has taken a great interest and love for what cryptocurrency and the blockchain can do on a global scale, not only for the first world but the third world countries. No matter where we are from we are all suppressed to some extent and this technology is able to free us from the tyranny and instability we all face.

In a recent interview by Crypto Finder, McAfee explained,

“The blockchain and cryptocurrency offer us, as citizens of the world an opportunity to free ourselves from the financial cage in which we are dependant upon the fiat currency which is controlled by the centralized entities which in turn controls us. Crypto gives us a currency free from control and observation of the governments.”

At the heart of all this McAfee passionately maintains that privacy is the central element of freedom. We can’t be free without privacy. As he puts it,

"You could not survive, without your right to choose your level of privacy, constantly, every hour, of every day of your life"

McAfee also says governments are not afraid of Bitcoin, simply because quite likely it won’t be the standard-bearer in terms of use. It’s slow, clunky, it has no privacy or smart contract features. It’s basically old technology now, however, people love bitcoin and it will always be our standard of value for investments, at which altcoins are aligned.

According to McAfee, the cryptos that governments are afraid of are cryptos that we use like Monero, Ethereum and other privacy coins that have an impenetrable technology and a definite use case which can be utilized by the individual country or community thereby creating an ecosystem in which all will benefit.

The general consensus at present regarding cryptocurrency is to amass and hodl in the hope it rises in price or capitalize on the volatile nature of crypto by buying and selling or trading to make a profit. There seems to be the idea that crypto is intended to make one rich. And although it has happened in the past to the few who invested early, the technology or currency was not originally meant for that to be the case.

Crypto is meant to be used, in other words, transacted with. Cryptocurrency is predominantly thought of as an investment, however, all that does is create volatility and fluctuation. It is arguably presumed by everyone who enters the crypto world that is it only for exchange.

Interestingly, John McAfee does not invest in cryptocurrency. He continually implores people to use crypto for its intended use. Not just trading in the hope to get rich.

When asked what does he think is dangerous to the crypto world, McAfee says,

“What’s dangerous is the users who insanely invest in crypto and not using it. It’s madness! If we don’t use it, the hope of getting rich with it is shattered. Everyone thinks crypto is for exchanging. It’s for transacting, buying things with crypto.”

McAfee’s views on the Libra coin are not surprising. In fact, any central bank digital currency that is being proposed McAfee says “is the holy grail for totalitarian governments”. Facebook is saying they want to empower the users of their coin. The fact is, Libra doesn’t empower anyone but facebook. On the contrary, everything you do now will be monitored financially. Not just what you’re buying or who your friends are and who you are talking to.

As McAfee points out,

“Libra is an abomination. Libra is not the spirit of cryptocurrency. It’s just Facebook leaching more and more into your being.”

“Blockchain is the first world-changing technology in the past 100 years that didn’t come from the bowels of a secret government development or CIA, Samsung, Apple or IBM. It came from ordinary programmers who are ordinary people and now been with us for 10 years when it was brought to light by Bitcoin.”

Prior to that, it was first conceptualized in 1991 by two engineers when they wrote many papers with the idea of creating a timestamped digital document. Essentially they set out to create an immutable ledger. Many consider this to be the first incarnation of blockchain.

Starting out and making his mark with the McAfee Antivirus software, being a mathematician and engineer in his own right, John McAfee is certainly a person people refer to with his wealth of knowledge and experiences. His forthright manner and disruptive views are all about waking people up to what’s happening in the world. His passionate nature and constant use of expletives are what make McAfee who he is as many have come to admire the vigilante. Love him or hate him he makes some good points in this video…

It doesn’t matter how many cryptocurrencies are out there. All that matters is the fact they are usable and functional. That they have a use case and have the velocity within an ecosystem. We need to understand the power of cryptocurrency not built by governments, but built by the people and offers us for the first time in human history, the real chance for absolute financial freedom, where your crypto wallet is your bank.

While listening to this video and John McAfee’s pearls of wisdom I immediately thought of what Markethive is doing for and with its community that is very much aligned with McAfee’s reasonings. It is building an ecosystem offering privacy and autonomy with the opportunity for everyone to realize their potential, become self-sufficient with the freedom and infinite potential of financial sovereignty.

There is a great purpose and a complete ecosystem of products and services built around the Markethive consumer coin. The Markethive Coin is not dependent upon speculative value as is the case with many other cryptocurrencies and platforms and is a fundamental difference to the other systems out there. 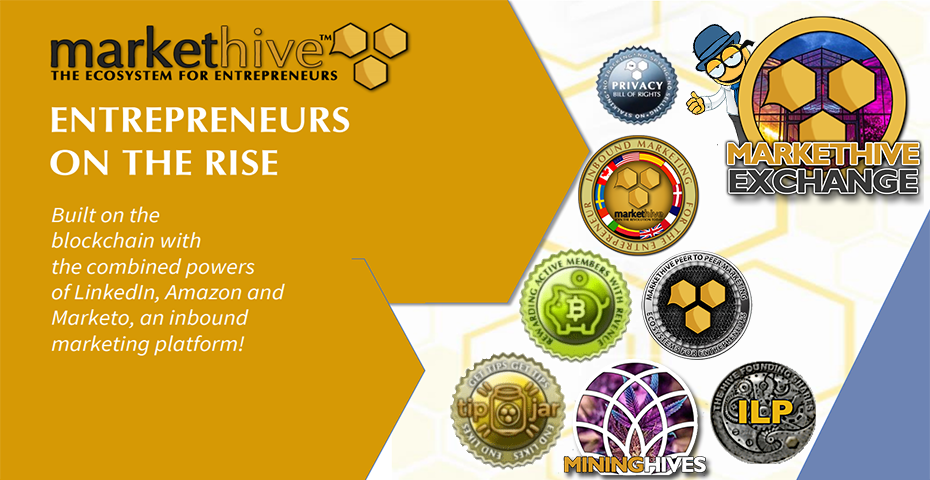 The Markethive system has been developed to produce revenue in the traditional sense with the added benefits of the blockchain taking it to the next level. The revenue is a vehicle that is used to buy the Markethive Coin back in the free market so it can be redistributed into the economic vortex of the system.

Coupled with numerous domains, a powerful social matrix, and the eventuality of quantum computer technology and mining hives, Markethive will also be impervious to central authorities and will be the ultimate ecosystem that the people need and are looking for whether they realize it or not. It champions all aspects of decentralization, privacy, autonomy, freedom of speech and self-sovereignty with the community’s best interests at heart.

The future of the global economy will be all about cryptocurrency. It cannot be stopped and it’s not going away. With interoperability becoming more viable with evolving technology at a speedy pace, the Markethive economy with its coin (MHV) will be a resourceful entity in the blockchain and crypto world. Once all operations are integrated along with the steps to ensure long-term sustainability as the community grows, the MHV coin will inevitably increase in value securing your success and prosperity within Markethive and beyond.

The world needs advocates with soul and heart like John McAfee. Granted, his methods are extreme and unorthodox, but he’s doing his absolute best to “wake people up”.

A Crypto/Blockchain enthusiast and a strong advocate for technology, progress, and freedom of speech. I embrace "change" with a passion and my purpose in life is to help people understand, accept and move forward with enthusiasm to achieve their goals.