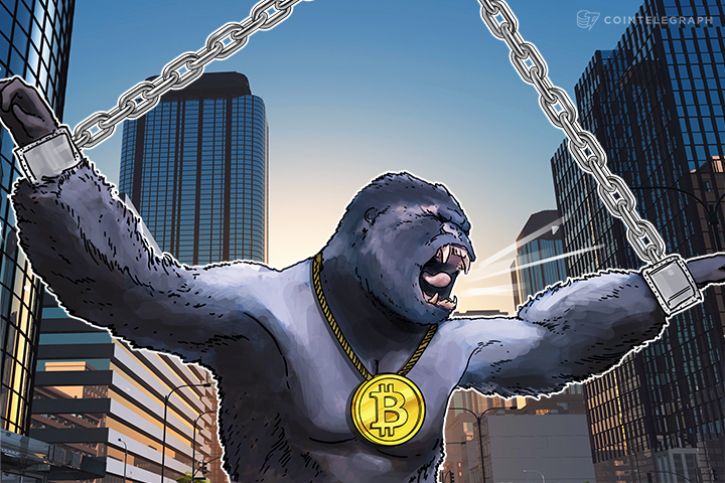 Is Bitcoin’s Reign as King of Cryptocurrency in Danger?

Regardless of where your allegiances lie in the crypto community, homage should be paid to the original Blockchain solution — Bitcoin. However, it has been 10 long years now since Bitcoin came into being (an eternity in the cryptocurrency space) and things are starting to get away from the King.

Bitcoin’s path was forever changed in August 2017 when a new challenger stepped up to the plate amid the rapidly escalating scaling debate. Bitcoin Cash appeared with its backers claiming it to be the one true ruler. Not long after this came Segwit 2x's failure to launch, which essentially confirmed Bitcoin’s status as digital gold. As a digital gold, it may have no rivals, but in the world of cryptocurrency it may have played its last move.

Scaling is a constant topic for evolving cryptocurrencies, and if Bitcoin cannot scale properly soon, it could be abandoned by investors for a more forward thinking cryptocurrency.

After bringing in millions of users to the cryptocurrency space, Bitcoin has hit a log jam on its network as available blocks fill up with transactions quicker than they can be mined. This backlog has led to higher transaction fees and longer waiting times.

These factors all end up being counterproductive to the principles underpinning cryptocurrency which are to eliminate the power that banks have over money. Banking fees and centralised waiting times are part and parcel of the irritation that comes from another entity being in control of one's money. Bitcoin is increasingly picking up these bad habits, leaving its users with a feeling of déjà vu harking back to the days when banks held a monopoly over monetary services.

Waiting in the wings

Bitcoin’s move towards digital gold was a communal decision, and therefore blame cannot really be laid purely on the currency’s shoulders. But in that short time, frustrations amongst investors have grown with regards to the scaling issues.

There are other currencies waiting to try and take the mantle away from Bitcoin, and already this has been demonstrated as Bitcoin suffers a 50 percent drop in market dominance since November. Currently, market share for Bitcoin is just over 33 percent, having not too long ago been at over 60.

Bitcoin Cash is the most direct competitor to Bitcoin, trying to replace it as a ‘peer-to-peer electronic cash system’, as outlined in its white paper. However Bitcoinc has more than just its potential replacements to worry about, as the adoption rate of the currency is reversing. Bitcoin once held sway over a number of large companies who had adopted it as a form of electronic payment, but have since reneged on their adoption. Steam, formerly a strong supporter, no longer accepts Bitcoin, while Microsoft caused confusion when they looked to stop accepting only to rebut this and state:

“Microsoft has restored Bitcoin as a payment option after working with our provider to ensure lower Bitcoin amounts would be redeemable by customers.”

As companies turn away from Bitcoin, even some of the more established names in cryptocurrency join the march for the door. Civic CEO Vinny Lingham, who is well respected for his opinions in the crypto community said:

“When I look at it from the product standpoint, I think the greater demand is for peer-to-peer cash than for digital gold.”

Where to for Bitcoin?

There are currently plans underway for the oldest and most well-known digital coin to try and overcome this scaling issue. Some of the solutions being considered include the Lightning Network, or major upgrades to the network like changing block sizes.

Lightning Network, a technology which is being tested slowly but surely on the Bitcoin network, involves taking the transactions off-chain and opening payment channels. With these transactions taking place off chain, the result is an almost instantaneous transaction, at a much cheaper rate. This kind of upgrade will require a lot of consensus, and will need to undergo a lot more testing and proof before it becomes entrenched and usable on a large scale, which is another issue that Bitcoin has.

Even the idea of making big changes to the network could again fail and flounder. We have already seen this with the failure of the Segwit2x potential upgrade. Bigger blocks could solve the problem, but then Bitcoin will essentially going down the same path as Bitcoin Cash, and with too many staunch supporters in the community, this is unlikely to happen.

Bitcoin is well entrenched in the cryptocurrency space, and will likely be a leading currency for a good while more as people refer to Bitcoin first before anything else. But, as the community matures, explores, and demands more, Bitcoin could be in trouble. Changes need to happen, and while Bitcoin will not fall on its sword too soon, if it does not make changes, then the potential for failure will continue to increase.