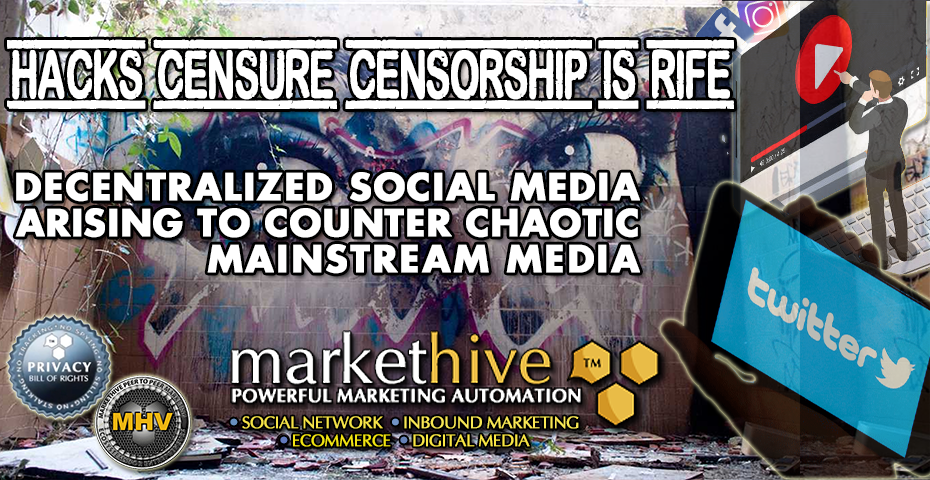 July 15th, 2020 will most likely go down in history as one of the worst days for Twitter in its 14-year reign as the platform that everybody who’s anybody has an active profile and trusts that their account is secure. It is known as the political discussion platform that world leaders use among other high-profile celebrities and apart from Twitter using its power to effectively flag and censor content they deem disinformation or not acceptable by their standards, it seems hackers can also mess with the accounts.

An overwhelming hack that was reportedly taking advantage of internal tools by convincing a Twitter employee to assist in the hijacking of many high-profile accounts which enabled the hackers to take control and solicit Bitcoin donations. Among compromised accounts were those of U.S. presidential candidate Joe Biden, former U.S. President Barack Obama, Google, Apple, Warren Buffett, Elon Musk, Kanye, and Kim West along with many well-known people in the crypto space.

The scale of the attack was enormous but apparently the financial reward was minimal. These hackers brought a $28 billion company to its knees but it seems they only collected a trifling $120,000 in Bitcoin.

Twitter’s reputation is the real casualty as the impacts are multifold. It’s now evident the hackers had access to private communications for the accounts they penetrated and could’ve been used for much more destructive nature than just scamming crypto. Nevertheless, high-profile accounts were embarrassed, associated with scammers, and locked out of their account, regardless of any security measures they may have taken.

Given the nature and standing of the users, it’s a mystery how and why it’s even possible for Twitter employees to usurp any account on the platform. While hacks of centralized services are quite common these days, they are rarely broadcasted in such a direct, explosive manner in real-time.

This period of chaos and confusion went on for several hours and the hits on more accounts continued. Twitter’s response was slow and disorderly and although they must’ve been aware of what was happening, they were either unable or unwilling to shut down the platform during the pandemonium. If the report from vice.com Motherboard is accurate regarding the hackers having assistance from a Twitter employee on the inside, it makes Twitter’s controls look exceptionally weak.

Furthermore leaked screenshots revealed more information about Twitter’s secretive abilities to control accounts and narratives on the site. This is most damning as it is evidence that Twitter is aggressively deleting from the site and contains such keywords as ‘trends blacklist’ and ‘search blacklist’ which seems to show that Twitter does exercise some editorial bias at what content receives algorithmic boosting and what doesn’t.

This accidental reveal of Twitter’s deboosting tools will strengthen the critics’ view that Twitter is a partisan, editorializing service rather than the neutral one it claims to be. It has also been aggressively pursuing more controls alongside algorithmic, rather than chronological timelines.

Fact-checking handled by the Moments team at Twitter is a bone of contention. It’s a challenge in areas like science and medicine, where respected authorities enforce established standards of knowledge, but it’s almost impossible in politics.

For instance, flagging President Trump’s Tweets was gutsy but seen as clumsy and although they may be experts on compiling social media posts arranging them into a narrative, it hardly qualifies them as master arbiters of truth.

Plus there’s more direct intervention in trending topics and when you consider that all of these measures make up an arsenal to control speech, it seems the perfect juncture for an autocratic oligarch to censure any discourse involving influential people.

Time To Move On

We’ve come a long way since the first video of a day at the zoo on YouTube, another tech giant receiving bad press for its censorship, which has escalated into class-action lawsuits. What started out as a novel way to communicate, find friends, and deemed as “fun”, is now hazardous to our health, wellbeing, and privacy, even livelihood.

We have been subject to numerous breaches of trust, and control by the centralized big tech platforms that have become commercialized and overtly politicized, and therefore intervene in political disputes by de-boosting particular topics and also selectively banning individuals, in some cases companies with a concept, idea or technology that threatens the status quo.

There is growing unrest among users on these platforms that have an established model of total control, including ownership of all users’ content which retains the discretion to both monetize or “cash in” on user-contributed content and kick users off the platform for any reason.

Property rights of users’ content creation should extend to these social media platforms, however, given the current balance of power between the users and platforms, it’s not likely to happen within the current crop internet oligarchs still in the centralized Web 2.0 era.

Instead, we are seeing a number of social media and video platforms that are censorship-resistant with a focus on privacy emerging. 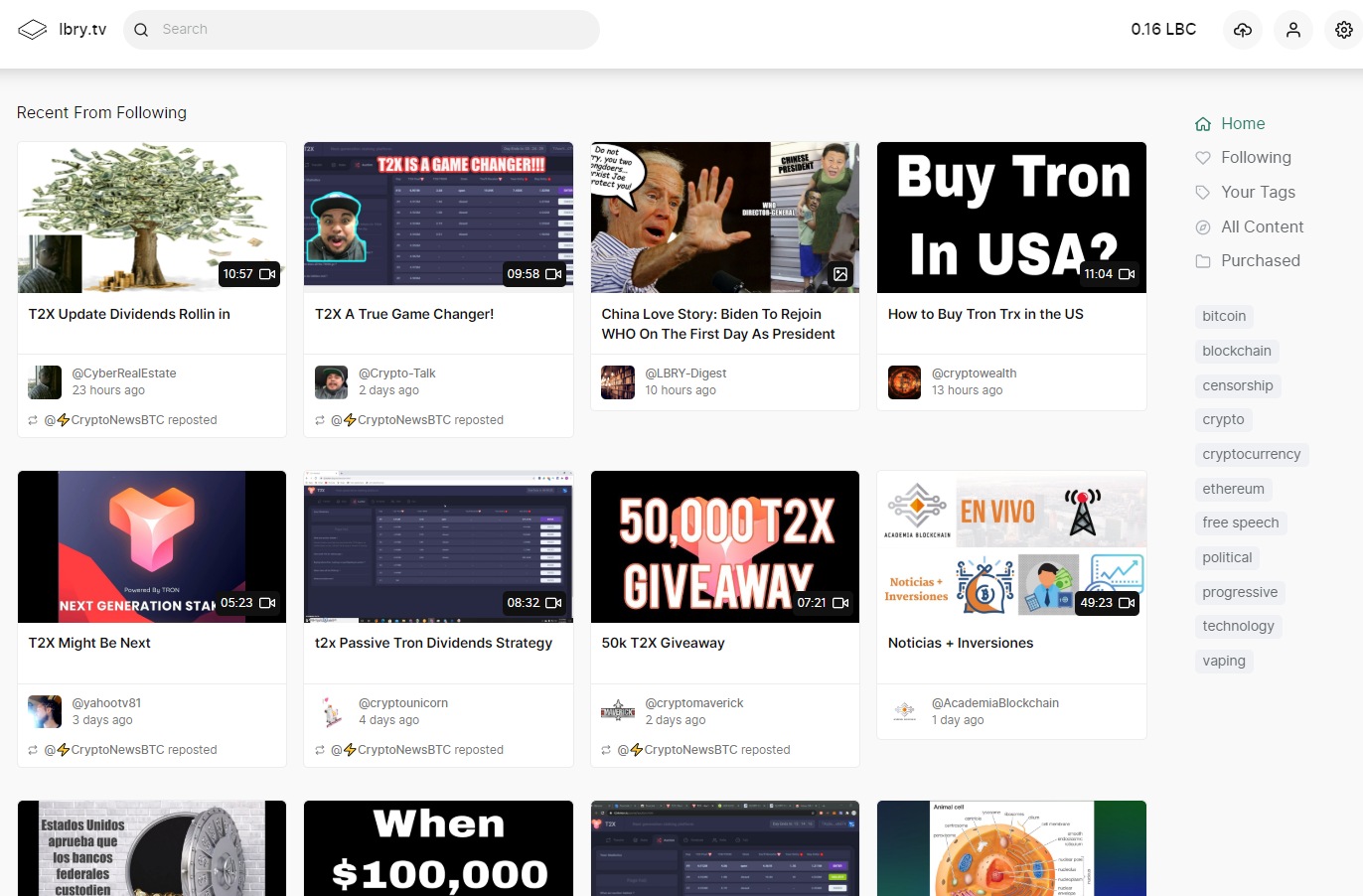 LBRY.TV, a video-sharing platform is decentralized with its neutral protocol that allows anyone to post content without reprisal, and stores this information on an immutable blockchain. According to CEO, Jeremy Kauffman, every time a crypto personality gets banned from a big tech platform LBRY has an influx of new users. He says,

“If platforms want to make the error of enforcing their political biases on their users, let the free market provide competitors like LBRY that make this problem obsolete. Innovations like LBRY make it so that the interference of Twitter and YouTube is technologically impossible.”

Notably, LBRY specifies the wanton power to censor and deplatform that centralized platforms apply is one of its motivations for being here and is experiencing positive growth. 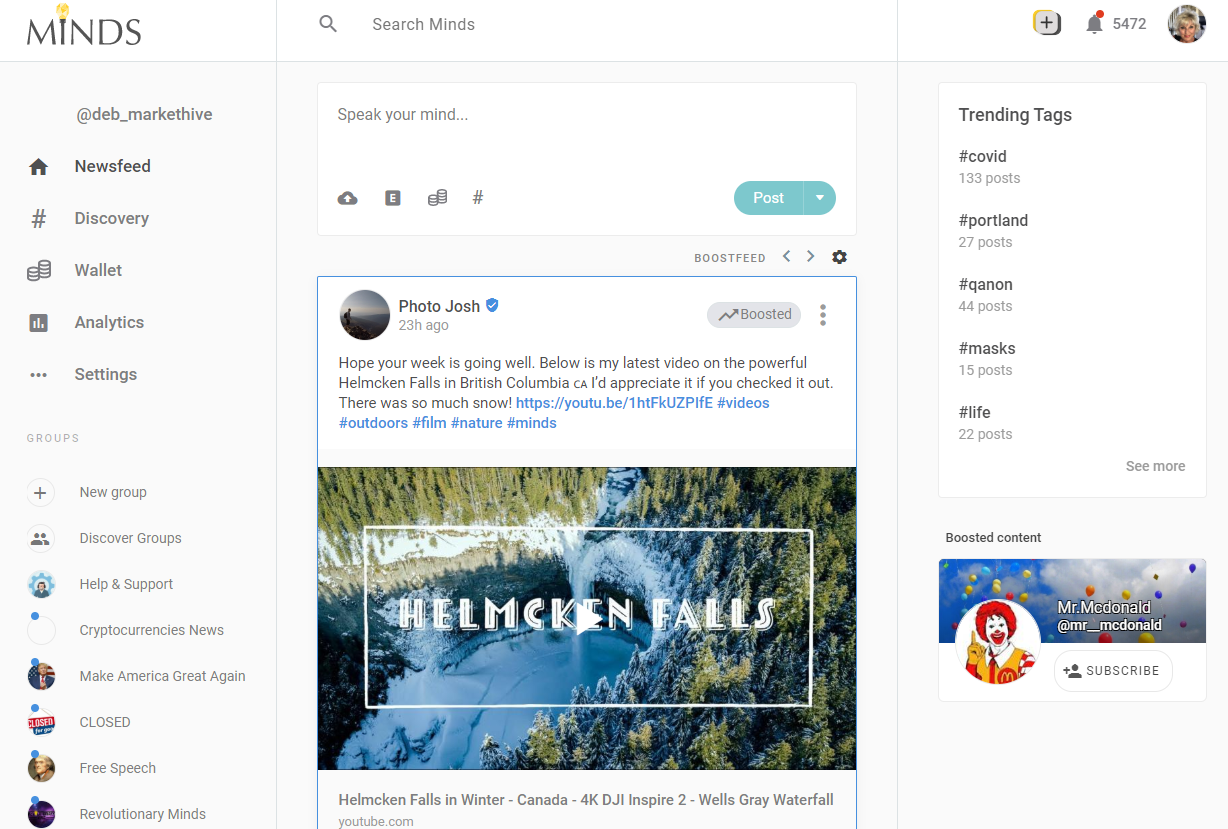 MINDS.COM is a blogging platform that emphasizes its minimization of privacy concerns and self-described as a free “crypto social network” that upholds internet freedom. Founder and CEO, Bill Ottman aims to provide a spying free alternative to mainstream social media and pointed out that surveillance by default with little transparency into how a user’s data is used and sold. He says,

“The growth is typically a direct result of scandals with mainstream media platforms. Every day there’s a new scandal. People are looking for alternatives and want to diversify … The trend is towards open source. We’ve seen this happen in other areas already.”

The Minds platform has plans to add several new features this year and is researching the possibility of a decentralized reputation system. Meanwhile, its growth continues as it is currently trying to attract users from India where the government has banned 59 Chinese apps at the end of June this year.

Necessity Is The Mother Of Invention

Since working and earning a living from home particularly online-based has become more popular and seen as a necessity in a growing number of cases, there is a platform focused on developing a complete self-sovereign ecosystem for the entrepreneur of all niches and individuals from all walks of life at any level of expertise. It does not discriminate. 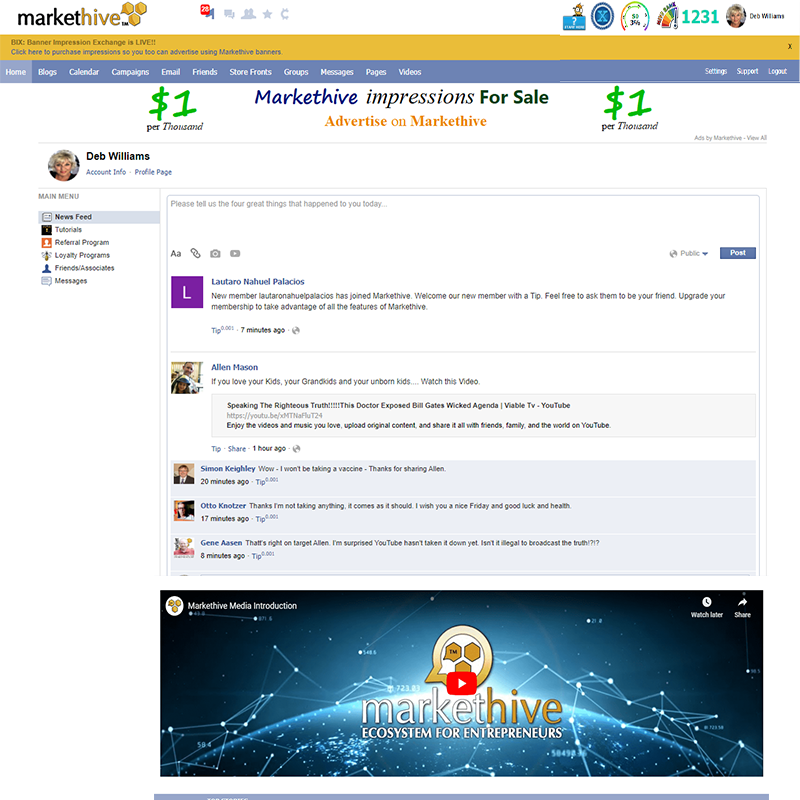 MARKETHIVE.COM is the not-so-vertical social market network media broadcasting platform that encompasses all facets of inbound marketing and digital media, built on the blockchain and takes privacy, transparency, censorship, and the ability for users to attain financial freedom very seriously.

With a built-in newsfeed and messaging system enabling users to collaborate, along with a philosophy, in which users can freely associate and disassociate with — but not ban — other accounts, allows for the coexistence of mutually acrimonious individuals without relying on censorship from management.

Founder and CEO, Thomas Prendergast says Markethive is a sanctuary to the millions who struggle. Markethive is just getting started. People have been making money with Markethive for years as an inbound marketing platform and saving money from tools that elsewhere would cost a lot of money. Today it has evolved into so much more including storefronts enabling the users to establish or participate in cottage businesses under the Markethive umbrella. He says,

“Markethive is a philanthropic endeavor. To give, not take, to help not exploit. Markethive is a vision with a mission — To empower and bring prosperity to every living soul with a purpose…even if that purpose is only to be free from the shackles of the Social Media tyranny we all face.”

Still, in BETA, the continuous growth of Markethive is noteworthy as all aspects of the free inbound marketing systems are currently operational along with the micropayment faucet system and airdrops, with the release of the wallets and messenger app just around the corner. Markethive is also preparing for its video platform, conference hub, and ecommerce APIs, along with numerous loyalty programs.

The image below is a comparison chart of leading platforms in the industry and what they offer.

Each of these platforms has a monetary incentive in the form of their own cryptocurrency with its primary purpose to free and empower the people and with the politicization of Facebook, Google, and other social media giants, Web 3.0 with crypto is a sign of the times upon us.

Although there is pressure on the tech giants from critics to stop their behavior and implement some form of decentralization, many say this would not be an easy task and not likely to happen. Even if they did, the way they behave in so many other ways is questionable.

It has become evident that the solution to an overbearing problem is a social internet built on a decentralized blockchain where users can own and operate without the risk of losing their fundamental right to free speech, sovereignty with a capacity to prosper on all levels.

This is a new era with the evolution of technology and the next generation. What would be even better is if these stand-alone vertical platforms work towards becoming interoperable thereby creating a collaborative network across the internet.