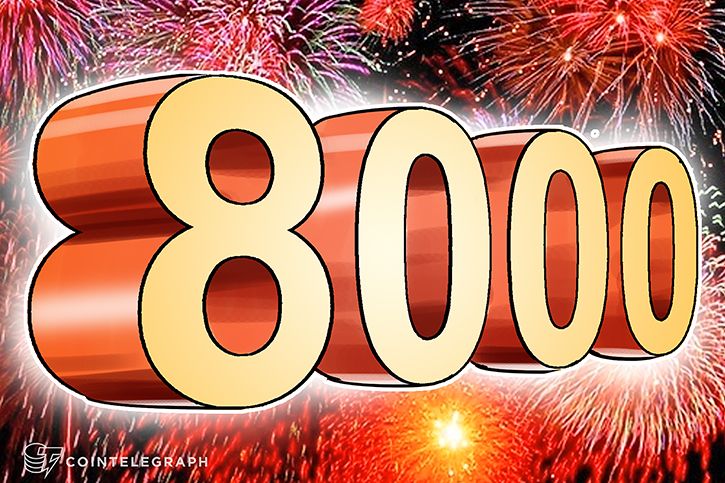 Bitcoin just surmounted the $8,000 level, topping out at $8,020 on Bitfinex before retreating to $7,900 at press time. By now, reading about Bitcoin’s breach of its previous high might be getting repetitious, so strong has the currency’s bull run been. This time is an exception, though, because Bitcoin just pulled the mother of all head fakes.

About a week ago, the SegWit2x hard fork was cancelled and the price immediately spiked from $7,200 to $7,800. But within the hour, the price had dropped and continued to fall further. Just a few days later, Bitcoin had sunk to a local low of $5,500, while rival Bitcoin Cash shot up from $600 to $2,600. At the time, a large number of Bitcoin miners had moved to Bitcoin Cash and the number of unconfirmed transactions soared to over 135,000. Fees increased commensurately.

Things didn’t look good. Bitcoin had just officially eschewed the only near-term solution to the scalability crisis. SegWit, which was adopted back in August, will take time to gain traction as wallet providers must include the feature and users must voluntarily begin using it. Lightning Network, Bitcoin’s long-term scaling plan, is still in testing and not ready for primetime yet. With the cancellation of 2MB blocks, it became obvious that there would be no quick fix to the currency’s scaling problem.

However, Bitcoin Cash began rapidly dropping from its nearly vertical price ascent, miners came back to Bitcoin, and the transaction backlog subsided. Bitcoin’s price began to rise, and as good news arrived, the price moves became even larger.

What good news? Well, the British hedge fund Man Group, with over $100 bln in funds under management, announced they will begin trading Bitcoin once CME’s futures market is launched. Immediately following this, Payments app Square announced its full integration of Bitcoin into the payments platform. The company stated:

“We’re always listening to our customers and we’ve found that they are interested in using the Cash App to buy Bitcoin. We're exploring how Square can make this experience faster and easier, and have rolled out this feature to a small number of Cash App customers. We believe cryptocurrency can greatly impact the ability of individuals to participate in the global financial system and we're excited to learn more here.”

Square’s market capitalization swelled from $15 bln to $16 bln following the announcement, so Wall Street is apparently just as pleased as the Bitcoin community.

Adding to the good news, Coinbase today announced Coinbase Custody, a Bitcoin storage service intended for hedge funds that might want to invest in the digital currency. Coinbase’s announcement states:

“Over 100 hedge funds have been created in the past year exclusively to trade digital currency. An even greater number of traditional institutional investors are starting to look at trading digital assets (including family offices, sovereign wealth funds, traditional hedge funds, and more). By some estimates there is $10B of institutional money waiting on the sidelines to invest in digital currency today. When we speak with these institutions, they tell us that the number one thing preventing them from getting started is the existence of a digital asset custodian that they can trust to store client funds securely.”

The announcement continues, describing the benefits of the service:

Bitcoin’s technical analysts, who look at chart patterns to try and predict price moves, suggest that the currency is about to experience a significant price move. Because of its rapid climb, analysis would seem to indicate that the price should experience a pullback here to regroup and consolidate before pushing higher. However, around $8,000 is the top of the trading channel that Bitcoin has been in for months, and if the price can resoundingly break through this barrier, it could go parabolic.

In a sense, Bitcoin’s value is even higher than it would appear, at least for those who owned Bitcoin before the August 1 fork and who held the resulting Bitcoin Cash they received. User csasker on the /r/BitcoinMarkets subreddit wrote: