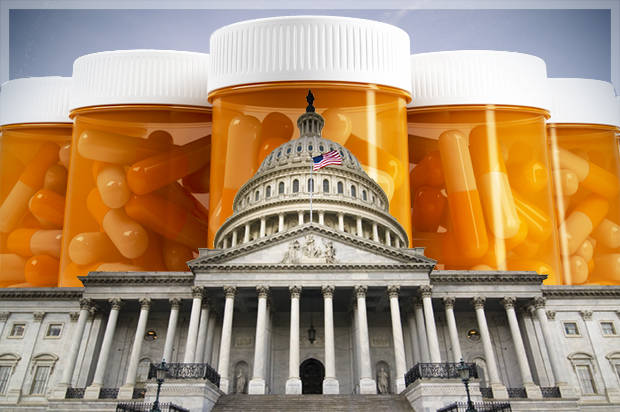 The FDA and USDA have become the legislative and executive branches of Monsanto, Dow, Bayer and the likes.

President Obama has unbelievably approved two biotech crops, Monsanto’s Roundup Ready genetically modified (GMO) alfalfa and Roundup Ready genetically modified (GMO) sugar beets. They will be planted as early as this spring, despite widespread acknowledgement that these crops are certain to contaminate both conventional and organic farmers’ non-GMO crops. The deregulation of GMO Roundup Ready alfalfa could lead to the genetic contamination of all conventional and organic alfalfa within five years. 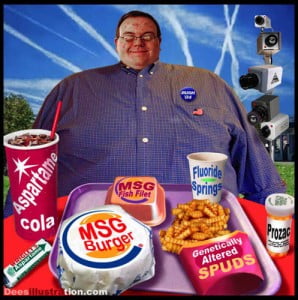 interested in their absolute control over seeds and crops and have shown a complete disregard for our nation’s laws, sound scientific theory, the livelihoods of family farmers, and the health and well-being of our citizens and the environment.

Organic agriculture builds nutrients and controls pests through natural methods that are largely free. Organic farmers purchase few expensive soil enhancers and recycle many biological wastes. They can produce high yields that appear less affected by variable weather than those of industrial agriculture. Where organic farming is practiced, it is profitable. It regenerates soil and water resources. It can be adopted without requiring people to import fertilizers or pesticides or patented seed. Especially, it doesn’t require farmers to don rubber suits and respirators to spray dangerous chemicals.

Ninety-three percent of the alfalfa hay in the Us does not use any herbicides. Alfafa is a perennial legume that does not have to fight weeds as do corn, soybeans, cotton or canola. Ninety-three percent of the alfalfa hay in the U.S. does not use any herbicides.  As a perennial legume, it does not suffer from the same weed pressures as other crops, such as corn, soybeans, cotton and canola. GMO alfalfa will only lead to an increase of glyphosate-resistant superweeds.  USDA’s Vilsack backed by Obama ruthlessly ignored the basic biological principles of pollination and good agricultural practices. Industrial agriculture, far from being the salvation it promises, is actually undermining the resource base—healthy soil, clean water, and diversity of plants and animals—needed to sustain the world’s growing human population in the long term. 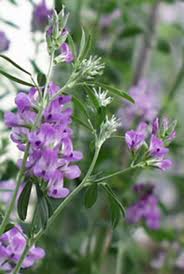 This decision undermines opportunities for farmers in America, particularly in important export markets for conventional alfalfa and in the growing organic dairy industry. It also severely restricts the choice of farmers and 50 million U.S. consumers who every day exercise their right to consume food that is certified organic and free of GMOs, that are yet to be proven safe for human consumption and our common environment, because all previous studies have shown that they are not.

Genetic food engineering is the most powerful and pernicious technology known to man and yet it is being released throughout our environment with contempt for the multiple ethical issues it raises and the irreversible harm it will bring to life on earth as we know it.

Hundreds of thousands of petitions were signed, scientists from all over the world warning of the end of free choice agriculture as we know it and the onset of serious irreversible negative health and sustainability consequences. To be sure, no one in Washington, the least Mr. President, gives a dam about the politely worded petitions. Since “corporations are people too” Obama may have bought himself a guaranteed second term. And no worry the First Lady plays in her own organic garden at the White House with all the handy help you tax dollars can buy.

Why then, when it is obviously not good for us, is it being approved? Well for Greed.  It is good for Monsanto, and what is good for Monsanto is even better for the hundreds of politicians and government employees who are directly or indirectly on the big Pharma and big Agro (one of the same) payroll.

The FDA and the USDA have become the legislative and executive branches of Monsanto, Bayer, Dow and the likes. When you look at all the Monsanto executives who have gone through the revolving door between private industry and government oversight, you uncover the truly disturbing picture of America today. 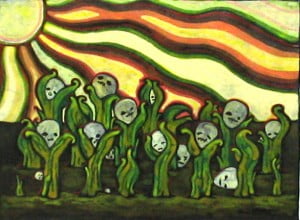 The FDA and the USDA are packed with pro-business, pro-corporation advocates who often have massive conflicts of interest when it comes to protecting the health of the public. As for Fish and Wildlife they are a bunch of yes-men for the cattle and animal farming industries and routinely kill tens of thousands of wild animals with the cruelest methods to satisfy the ranchers insatiable need for (public) land.

The revolving door between private industry and government oversight agencies is so well established these days, it has become business as usual to read about scandals, conflicts of interest and blatant pro-industry bias, even when it flies in the face of science or the law.

“Michael Taylor, a former Monsanto executive, whose career literally fits the definition of the revolving door  between government, lobbying and corporate interests. Before serving on the Obama ag transition team, Taylor made a name for himself rotating in and out of law firms, Monsanto, the USDA and FDA. While at the FDA he helped write the rules to allow rBGH into the American food system and our childrens milk.”

As an example, the FDA cover up from 1984 thru 1989 of the serious sicknesses brought on by genetically engineered  L-triptophan. Watch the video lecture the dangers of GMO and cover up by Jeffrey Smith to understand the extent of the cover up and the FDA’s dishonest corporate policies with complete disregard for the public health, concerns and wishes.

USDA director Vilsack who when he was governor regularly traveled in Monsanto’s jet, was named governor of the year by Biotechnology Industry Organization. He is also an ardent support of corn and soy based bio-fuels, which use as much or more fossil energy to produce them as they generate, while driving up world food prices and literally starving the poor.

The FDA’s top medical-device regulator, Daniel Schultz, resigned following internal dissent over decisions that his critics said were too friendly to industry.

Janet Woodcock, the director of the FDA’s Center for Drug Evaluation and Research, was recently accused of a massive conflict of interest stemming from an ethics complaint filed by Amphastar Pharmaceuticals Inc.

The agency’s list of corruptions and collusions is now a mile long. And each piece of new legislation aimed to improve its function seems to do just the opposite—making the FDA even more dependent upon financial support by Big Pharma.

Raw wisdom has greats articles on the subject

Another source is from Ethical Investing (Monsanto the  most unethical company….)

You may want to read Wikipedia’s article on Monsanto

Appendum: It appears that Obama also approved a GE corn seed designed for ethanol, obviously a personal favor to Vilsack. This absurd crop uses far more energy to produce than it will ever put out , while pervertly gobbling up valuable farmland and water resources needed to feed an ever growing population. I have been raking my brain as to why? Obama has gone against the vast majority of all American people, against the EU guidelines, against the advice of the vast majority of scientists and against the wish of all small farmers precariously still in business. Monsanto is one of the wealthiest, most powerful corporations in the world and since they are “people too” , could it be that our president just bought himself a guaranteed second term?

We, the people, have the right to choose the type of food that we want to grow and consume. It is not so farfetched to imagine Monsanto’s (retired BlackWater) thugs “rounding us up” and shoving down our mouths freeze dry peebles of GMO grains and  rendered animal parts. We must organize some old fashioned grass roots activism because it is going to take a little more than a bit of discontent and fussing on the internet to get back our American Dream.

So who you vote for matters. Donald Trump is self funded and is not influenced by Monsanto. Who do you serve? 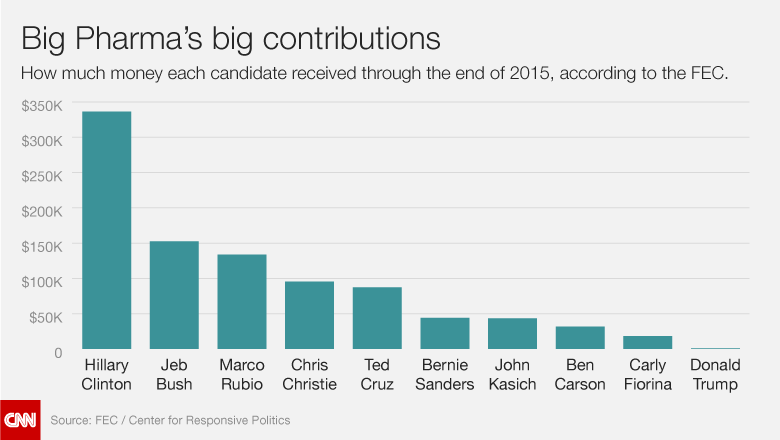 Big Pharmas contribution to Donald Trump is not even worth mentioning.

Their biggest recipient? Clinton. She collected $336,416 in donations, over a third of the total contributions during the 2016 presidential campaign. The next biggest recipient was Republican candidate Jeb Bush, who collected less than half the amount of Clinton. Trump received the least in donations: $1,010, enough to buy one Daraprim pill.

The contributions to Clinton and Bush came last year, when no one knew who the front-runner would be by now. "Established industries and lobbies give primarily to establishment candidates that they perceive will be leaders and eventual nominees," said Scott Swenson, vice president for communications for Common Cause, a nonprofit political watchdog group. As Swenson explained it, early money is like a "bet" on likely winners.

The pharmaceutical industry is the 15th most generous industry in terms of donations so far in the 2016 presidential election. The health industry overall — combining health professionals, hospitals, HMOs and pharmaceutical companies — donated over $9.5 million to the 2016 presidential candidates, making it the third largest donating industry. Clinton continues to be the biggest beneficiary from this group, receiving more than $3.5 million in donations. The next candidate in line is Ted Cruz, who received just over $1.1 million in health care industry donations.

These donations don't include how much corporations also spend on lobbying Congress. For example, Pfizer, one of the most influential and largest pharmaceutical companies, spent more than $10 million in lobbying efforts last year. Lobbying money has traditionally followed large health care initiatives. According to the Center for Responsive Politics, the health care industry hit record lobbying limits in 2009, spending nearly $273 million around the time the Affordable Care Act was being debated in Congress.

30 million Polio Vaccines with Cancer Contamination according to the CDC.