a deal with the Ukranian government to put the latter’s data on a Blockchain platform. The deal will ensure blockchain recordings for areas like public health and services, state registers, energy and social security. In a twist, High Tech Private Equity Fund SICAV plc is reported to have acquired nChain, a Blockchain company associated with Wright Craig, the man who once claimed to be Satoshi Nakamoto. The company plans to make available their intellectual property assets to the blockchain community via royalty-free licensing and open sourcing.

An initial Coin Offer intended for mining activities to support the signaling of Bitcoin Unlimited has been halted as a result of not reaching its goal. The ICO was allegedly linked to Chinese Angel Investor in Bitcoin and Ethereum Classic, Chandler Guo. On the Bitcoin Network scaling front, the world’s largest Bitcoin mining pool, F2Pool has declared its support for Segwit. Wang Chun, Owner of F2Pool revealed on Friday that 56 percent of his network members are in support of Segwit.

Eventually, the advent toward mainstream adoption of blockchain gets after Mark Carney, Bank of England’s Governor, claimed blockchain technology can save banks tens of billions of dollars a year. The governor was speaking International Fintech Conference last week in London, where he further revealed that the next generation of Britain’s interbank wire system will be blockchain-compatible.

Market Updates (as of Monday) 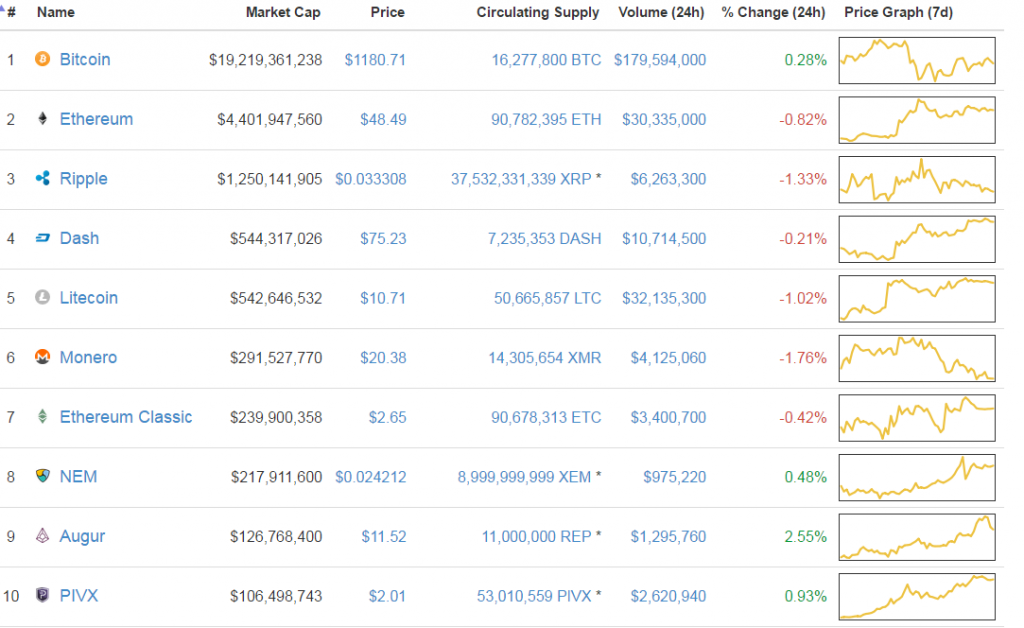 is outstanding despite the fact that the scaling debate is still raging on. Some experts believe it is being driven by mainstream adoption in Japan. As at 22:00 GMT, Bitcoin has appreciated by 0.22 percentage point and its market value was $1180.73 maintaining the number one position on CoinMarketCap. Ethereum is still holding on to the 2nd spot and has kept the velocity from the current altcoin rally although it lost 0.82 percent today. Its market price was $48.49.

After a stratospheric rise that resulted in Ripple ousting Dash from number three, it has slow down to some degree. The cross-border transfer crypto with KYC was selling at $0.033308 with a 1.33 percent downward adjustment. The battle for number four is so titanic. For three days now, Litecoin and Dash has been dislodging each other to take over momentarily. However, at the time of filing this report, Dash was reigning with a 0.21 percent depreciation, posting an exchange rate of $75.23. Litecoin also took a fall of 1.02% and was being sold for $10.71. It must be stated that the decision to implement Segwit has boosted its price and market cap.

Even though Monero was recently indicted in a finding that found out that some of its transactions are traceable, it doesn’t seem to be affected much and is still at the 6th position. It scored a negative 1.76 percentage point and the exchanges listed it for $20.38. Moreso Ethereum didn’t have a good time either. At number seven, it could be bought for $2.65 and dip 0.42 percent. With a market price of $0.024212 and 0.48 percent upward gain, NEM kept its 8th position intact. The consistency for the Smart Contract platform is impressive.

Angur with the selling rate of $11.52 and a 2.55 percent upward adjustment maintained number 9 as well as the biggest gain on top 10. In a surprising move, PIVX has pushed Maidsafecoin to the 11th position and it is now counted among the top 10 Cryptos on CoinMarketCap. This anon digital currency in a few months has established itself among the elites. It bagged a 0.93 percent growth and its price was $2.01.

Factom rose by a significant 14.37 percent. It is one of the Cryptos below top 10 that must be watched keenly. Sadly Bitconnect which was at top 10 briefly on Wednesday fell negative 26.63 percent to be the biggest loser.