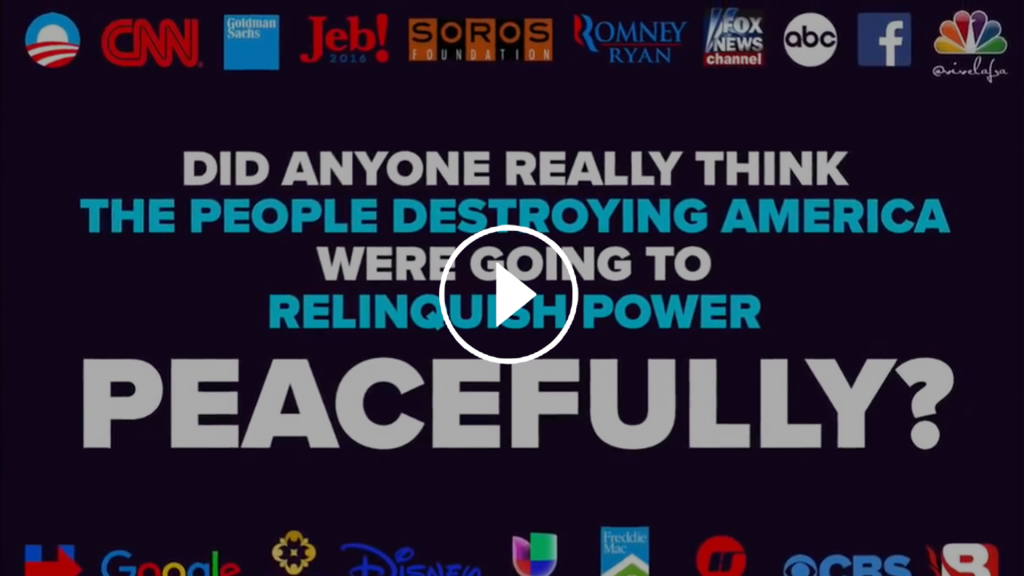 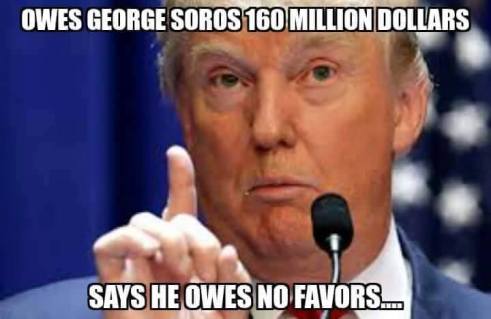 Well the meme above says he does.  Let me tell you how this lie was fabricated.

“Donald Trump has lined up three New York hedge funds, including money from billionaire George Soros, to invest $160 million in his Chicago skyscraper, a key piece in perhaps the largest construction financing in the city’s history, according to real estate sources and public documents.”?

That was back in October 28, 2004, 12 years ago. It says that the $160 million including money from Soros, not the whole amount. That money, from whomever it came from, was a business loan, not a campaign donation. Nobody knew 12 years ago that Trump would be whipping the socks off of all the Establishment Repubs today. It is in desperation that they are going back so far to dig up shit like this

Even if trump had got some of that money from a Soros hedge fund it would have been repaid long ago. Dig through his financials, which he made public, and prove me wrong.  Let me repeat, even if true, it was a business loan, not a campaigner donation.

Donald Trump has lined up three New York hedge funds, including money from billionaire George Soros, to invest $160 million in his Chicago skyscraper, a key piece in perhaps the largest construction financing in the city’s history, according to real estate sources and public documents.

Despite reports about the project’s record-breaking sales, most of them from Trump himself, many Chicago real estate developers and lenders have expressed doubts about whether the 90-story tower would ever be built.

“It is such a huge project, and the prices he said he was getting were so outside the norm,” said Robert Glickman, president and chief executive of Chicago-based Corus Bank.

Much of the skepticism springs from Trump’s own hype. “Chicago developers are much less flamboyant,” said Glickman.

The massive financing, which sources say also will include a $650 million construction loan from Deutsche Bank, should quell those doubts.

The document does not identify the other participants, but a key member is Grove Capital LLP, according to sources familiar with the transaction.

The firm manages most of the multibillion-dollar real estate portfolio of the $13 billion Soros Fund Management, from which Grove Capital was spun off last month.

Oh, justlittleoleme is a Senator Ted Cruz supporter, that explains the lie.   CRUZ OR LOSE

If Trumps owes Soros so much money why does he not call it in?

On Thursday evening at the World Economic Forum in Davos, Soros used a 45-minute interview with Bloomberg TV’s Francine Lacqua to create an explosion of headlines on both the political and economic front. “Donald Trump is doing the work of ISIS,” Soros said, citing the anti-immigrant vitriol that’s been a hallmark of the Trump campaign as he’s risen in Republican primary polls. He levied a similar critique against candidates such as Ted Cruz, and said Hillary Clinton would win the general election in a landslide.

Ideas like closing U.S. borders to Muslims, Soros said, might “convince the Muslim community that there is no alternative but terrorism.” He also said ISIS’s “days are numbered” as both the Iraqi and Syrian governments win back territory the terrorist group gained.

The rise of ISIS and the crumbling of the Middle East has created a refugee crisis for Europe, and Soros said German Chancellor Angela Merkel may have erred in opening the country to refugees. “She risked her political capital and lost,” Soros said. Nonetheless, he expressed optimism that Germany and other European powers could successfully integrate migrants.