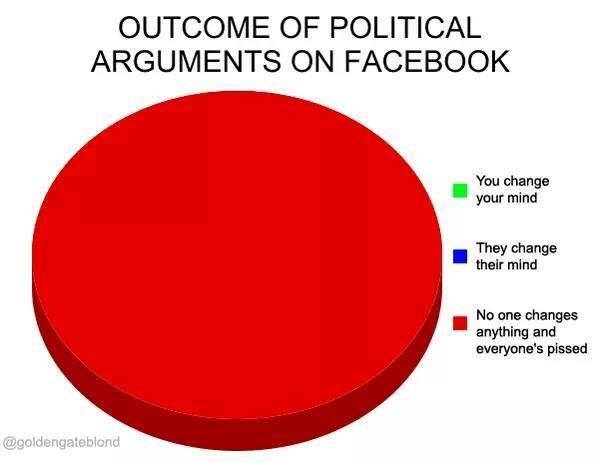 Why you should not post politic filled content on you Facebook account. I see a lot of things I disagree with on social media. It’s hard to keep our personal beliefs to ourselves when we see things online that we take issue with. Let’s take the subject of politics on Facebook.

For me personally, I have many friends and clients on Facebook who are on both sides of the fence politically. From time to time I have posted something politically charged, only to go back a little bit later and remove it after I’ve thought about the possible repercussions. I am now fully committed to never doing it again.

So, I’ve come up with some reasons why you shouldn’t post about politics on Facebook. Here you go…

1. You could lose a friend. Friends should be able to discuss political issues calmly and diplomatically…in person! Most people hide behind their computers and post things they would never say face to face.

2. You could lose a client. It’s not business, it’s personal…right? Bull crap! If a client feels strongly about a political issue and I go on Facebook and post something totally derogatory or counter to what they believe, they might take a different view of me personally and professionally. I want my clients to like me. People do business with people they know, like and trust. Period.

3. It’s a waste of time. You’re not going to change someone’s political beliefs on Facebook. You can debate and debate, but you’re just wasting your time. People are different and believe different things. Accept it, agree to disagree and move on. Life’s too short. Let your vote be your voice.

4. It’s the wrong platform. If you’re bound and determined to spend time arguing over political issues online, go to a political blog or a news site and do so. Don’t ruin everyone’s experience on Facebook with your rants. You may have a specific list of friends on FB that you only share political information with, but you never know what someone else might share.

5. There’s enough politics in the media. One of the reasons I use Facebook is to laugh, have fun and converse with my friends and family. I don’t use it to get worked up or stressed out over something I see that I disagree with. There’s enough political coverage in the mainstream media. More than enough. Keep it there and leave the politics to the pundits.

If you’re marketing your business on Facebook, you absolutely NEVER want to go down this road on your Facebook business page.

Now, I know there are a lot of people who are going to disagree with me. And that’s fine. You have every right to disagree. This is America. But, can we agree to disagree and keep it off Facebook?

What do you think?