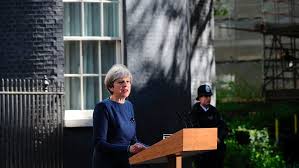 Theresa May, the British unelected current Prime Minister, has surprised and at the same time excited everyone by all the sudden calling a snap election in what may be an historical two months of campaigning.

“It was with reluctance that I decided the country needs this election, but it is with strong conviction that I say it is necessary to secure the strong and stable leadership the country needs to see us through Brexit and beyond,” May said according to Reuters.

No one was expecting the British election as May has univocally stated there will not be one, but the surprise u-turn sent FTSE down some 2.46%, Pound is up to months high and so is Bitcoin, rising slightly around 1.50%.

The outcome of the election is currently seen as somewhat certain because the Labour leader of the opposition, Jeremy Corbyn, is generally seen as unelectable. Moreover, Theresa May is 20 points ahead of Labour, but will there be a twist?

All eyes are now on Tim Farron, the leader of the Liberal Democrats. The party rose to power in a coalition in 2010 with the conservatives. Voters, however, severely punished them in 2015 because they rose student fees when they said they would not.

However, now the times are very different. Britain has as good as no official opposition. The only real choice is the Liberal Democrats, a coalition of social liberals and classic liberals. They usually strongly appeal to students, while also attracting libertarian-leaning voters.

In this election, their main selling point would probably be their pro-EU stance. Jeremy Corbyn has been accused of lackluster campaigning for remaining in the EU prior to the referendum. Some speculate he is secretly in favor of Brexit.

The only voice, therefore, for some 48% of voters who wished to remain, may be Tim Farron. It is far too early to say what exactly he will promise, but if the party accepts the referendum’s results and campaigns on a soft-brexit, it may actually have a real chance of providing a third political earthquake in just months.

The election may then be given some meaning, instead of being just a coronation, as the public debates whether they wish to hard or soft Brexit in potentially the biggest decision this nation has faced in almost a century.

We should, however, expect Tim Farron to botch it all and say we should have a second referendum, something which would probably take them off the election map and relegate them to a joke party.

Britain has voted to leave. The will of the people must be upheld. The question now is how, not if. The nation demands an opposition. Who wants the position is now the question everyone is asking.