Regulators worldwide are finding that it’s incredibly hard to control the explosive growth of money tied to no nation.

Russian President Vladimir Putin is the latest to call for regulation of cryptocurrencies, saying there are “serious risks” they can be used for money laundering or tax evasion. Finance Minister Anton Siluanov has called for regulating digital money as securities, while central bank officials vowed to work with prosecutors to block websites that allow retail investors access to bitcoin exchanges. “We think this is a pyramid scheme,” said Sergey Shvetsov, first deputy governor of the central bank.

It’s a development that creators of bitcoin, the best-known digital currency, saw coming, and prepared for. Since it works on a peer-to-peer network, users can buy and sell coins and secure and perpetuate the system without any government or central bank involvement. Trying to control it is “like trying to catch water,” said Alex Tapscott, chief executive of NextBlock Global Ltd., a venture-capital firm that invests in blockchain startups. 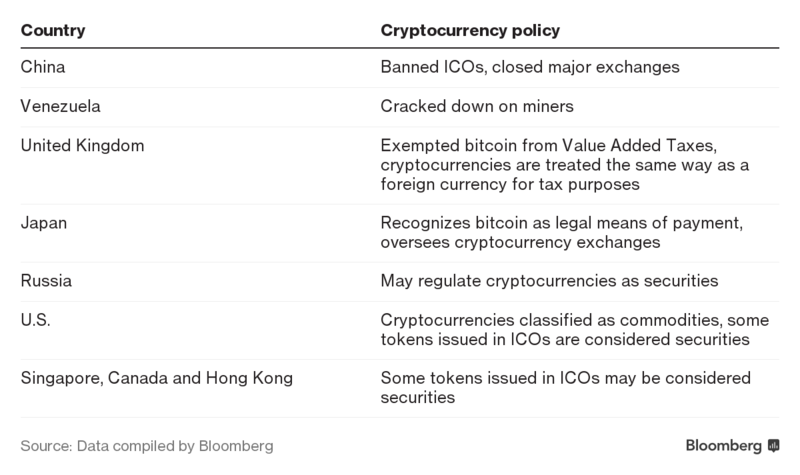 Nine years after a mysterious coder that goes by the name Satoshi Nakamoto unleashed bitcoin on the world, some see it as a revolutionary use of technology that takes power away from governments and gives it to individuals, like handheld video cameras in the hands of civil rights activists, or social media during the Arab Spring uprisings.

"As cryptocurrencies gain wider acceptance, their ability to undermine politicians increases,” said Roger Ver, an early investor in bitcoin who is known as Bitcoin Jesus, for proselytizing about the digital currency in its early days. "The invention of bitcoin is one of the most liberating technologies in all of human history. It is on par with the importance of the invention of the printing press, or the internet itself."

Digital currencies live on computers and can be held by millions worldwide, bought and sold on websites, at MeetUps, or in person-to-person meetings. Even if there’s no ATM or exchange nearby, anyone with access to the Internet can buy them. And they can be used to purchase everything from a sandwich to a carpet to a house, or they can be held as an investment.

An investment of $1,000 in bitcoin in 2012 would now be worth about $4.9 million, while the number of transactions continues to increase. In the second quarter, they reached an average of about 291,000 per day for bitcoin and nearly double that when other major cryptocurrencies are included, from about 60,000 per day in 2013, according to researcher CoinDesk.

Yet there is an undeniable dark side. Bitcoin rose to prominence with Silk Road, a marketplace for weapons, drugs and other illicit goods, and it’s still used for such sales on the so-called Dark Web even after Silk Road was shut down. It’s also the currency of choice for hackers who have invaded the computers of everyone from hospitals to police departments. Even the North Korean government is accumulating bitcoin as a means to dodge international sanctions.

That’s why Jamie Dimon, the chief executive officer of JPMorgan Chase & Co., sees bitcoin as a “fraud” that’s destined to come crashing down, as its use in ransomware schemes, drug and arms trafficking ultimately persuades authorities to find a way to put a stop to it. “Someone’s going to get killed and then the government’s going to come down,” Dimon said. “You just saw in China, governments like to control their money supply.”

While any central banker might be troubled by a stateless currency competing with the coin of the realm, China’s efforts to crack down suggest it may be harder than it appears. While the government crackdown sent bitcoin prices plunging as much as 30 percent, it has now recovered those losses, even as a growing number of governments take action.

Once the largest global market for trading, China now accounts for 1.5 percent of bitcoin transactions, while Japan — where regulators have been more open to digital currencies — accounts for more than 60 percent, according to CryptoCompare.com.

China is the leader in bitcoin mining capacity — computers that are used to support bitcoin transactions and then get paid for the service with newly minted coins. Regulators have so far refrained from any action in that area. Wu Jihan, CEO of Bitmain Technologies Ltd., the world’s biggest mining operation, said in an interview that regional governments are welcome to legally set up bitcoin mining farms which are clean and considered part of the high-tech industry.

Cryptocurrencies are attractive where there are restrictions on taking cash abroad or where the local currency is weakening because of inflation. In Venezuela, a place with both problems, bitcoin’s weekly trading volume spiked to an all-time high in early April, when violent clashes between protesters and police started. The government has conducted raids on bitcoin miners, accusing them of “internet fraud and electricity theft.”

The same combination of capital controls, high inflation and a weakening currency have driven demand for cryptocurrencies across Latin America. Bitcoin demand spiked in Argentina in 2013 after former President Cristina Fernandez de Kirchner banned dollar purchases, while Ecuador and Bolivia are among the few countries that have outright bans on the currency.

By contrast, the U.K. has exempted bitcoin from value-added taxes, and says it should be considered a foreign currency for corporate tax purposes. The U.K. was early in publishing clear directives, ruling in 2014 that "bitcoin may be held as an investment or used to pay for goods or services at merchants where it is accepted.”

Japan this year began enforcing a law that recognizes bitcoin as a legal method of payment, and overseeing cryptocurrency exchanges — effectively providing clarity and support to local entrepreneurs. That’s something Vietnam may do as well.

The U.S. Commodities Futures Trading Commission classified bitcoin as a commodity in September 2015 and this year approved the first cryptocurrency options trading, clearing and settlement firm. The Securities and Exchange Commission in July said some coins issued in ICOs would be considered securities and regulated as such unless “a valid exemption applies.”

While government efforts to come to grips with digital money have been fraught, the more important trend may be the growing number of money managers who are looking at cryptocurrencies as an asset class for investment.

"What’s more interesting is the increased sophistication of the institutional buy side for cryptocurrencies," said Nolan Bauerle, director of research at CoinDesk. "This new type of buyer means this is only a hiccup. There are important sums of fiat ready to cross into crypto in the short term." There are more than 68 hedge funds focused on cryptocurrencies today, many of them run by people from Wall Street.