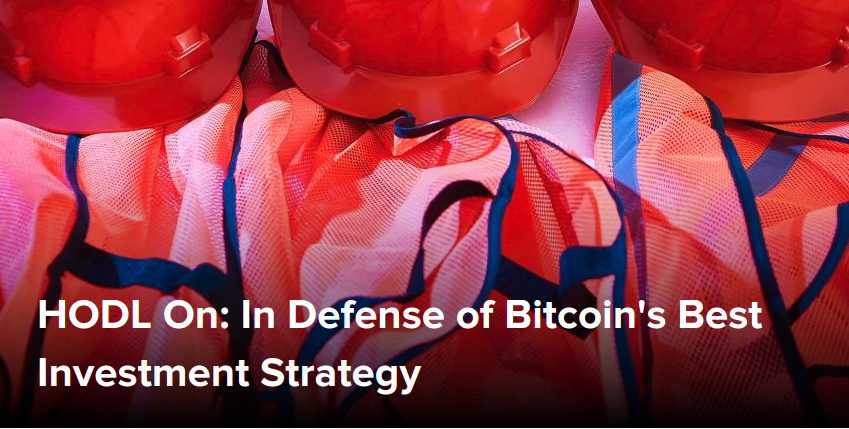 HODL On — In Defense of Bitcoin's Best Investment Strategy

When reached for comment, Walton said, "It's paper anyway. As far as I'm concerned we're focusing totally on the company doing well and taking care of our customers."

He didn't care about dollars; he cared about his asset Wal-Mart, and he still owned that.

History of the #HODL
In bitcoin's volatile and roller coaster past, "HODL" was the meme that bound the cryptocurrency community together. It stood for the proposition that we all believe in the future of bitcoin. It's both funny and insightful.

Here is the original post by GameKyuubi on a Bitcoin Talk forum (spelling errors and profanity included): 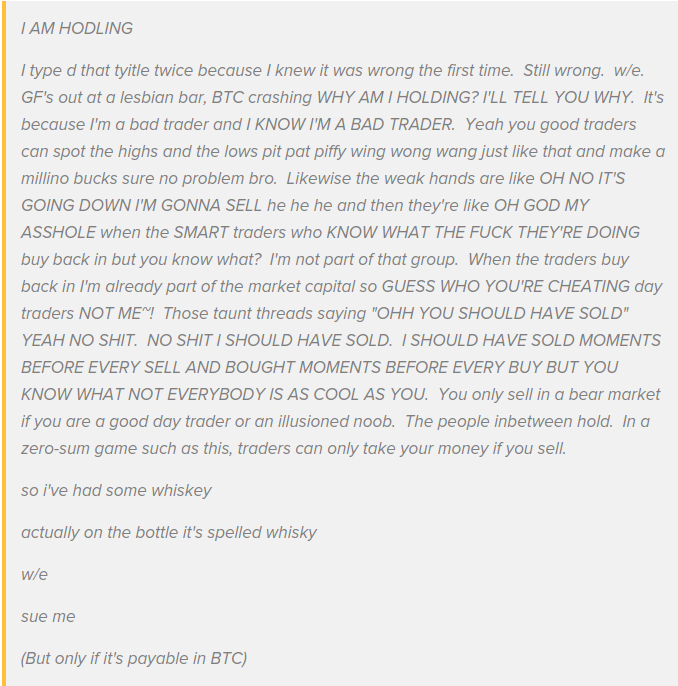 It was not about bitcoin versus bitcoin cash or 1,000 other cryptocurrencies. It was bitcoin vs. the world and we ALL embraced it.

It only took 11 minutes for this post to become a meme that became the rallying cry for the entire crypto world. We were all on the same rollercoaster ride and GameKyuubi, in the depths of his frustration, had (sort of) elegantly articulated both what it feels like and the best trading strategy for an asset this volatile.
Buy and HODL.

The good traders
GameKyuubi was wrong about only one thing: There aren't any good traders.
There are lots of us who believe we are good traders. But we aren't. Of course, some of the loudest voices on Reddit regularly remind us about how well they time the market. Except when they don't time the market well.

A paper published last October by the Haas School of Business at UC Berkeley entitled "Do Day Traders Rationally Learn About Their Ability?" used nearly 15 years of stock market day trading data to conclude that all day traders are irrational, the vast majority of day traders lose money, and even when day traders are successful, they "irrationally attribute success disproportionately to their ability rather than luck."

This sounds exactly like the crypto trader. Any post you see mocking HODL is likely someone who thinks they are really smart because they made money by trading crypto last year.
Of course, their success was due to their unique trading ability and not the fact that the entire market rose like a rocket.

HODLing works
Still, empirically, even in volatile assets like bitcoin, carefully choosing an asset and holding long-term positions has proven to offer the best return.

Warren Buffett, the most successful investor of modern times, has often said that he only invests in what he knows. His preferred holding period: forever. With that model, his company, Berkshire Hathaway, has averaged a 19 percent annual return since 1965 which means it has risen more than 1 million percent.

Theoretical models that assume participants know when markets will move against them can offer better returns but, in practice, market movements cannot be reliably predicted so even when people like Bernie Madoff try to make us think that they've figured it out, they haven't.

More possibilities
For those not interested in limiting their activity to HODLing, there are two new and useful ideas that have begun bouncing around that really do advance cryptocurrencies: #BUIDL and #SPEDN.

BUIDL has been used to help remind us that, in the words of a CypherPunk's Manifesto, "Cypherpunks write code." In order for the blockchain to really be useful and valuable, we need to build stuff on it. Watching the price go up and down either as a trader or a HODLer does nothing to make bitcoin work better.

We need to create some of the promised applications that can really change the world. To date, the blockchain community has fallen short in this regard outside of the areas of payments but there are some real wins.
Just this weekend, Voatz, a Medici Ventures portfolio company is running party county convention voting in Utah, state convention voting in Michigan and state primary voting for overseas and military voters in West Virginia, all on a blockchain platform.

Blockchain voting is a simple application, but it is one that can bring a much-needed security and transparency to elections. And we are doing it now.

SPEDN is a nod to the many of us who realize that, for bitcoin to be useful, we need to be able to spend it to buy things. And I mean everything. It really doesn't matter whether it is through second-layer solutions like lightning or forks like bitcoin cash; we need more ways to use cryptocurrencies in real-world transactions.

A focus here, rather than complaining about HODLers would be helpful. We need many more merchants to accept cryptocurrency before it becomes useful. Options to spend bitcoin remain severely limited in most areas and this will ultimately limit bitcoin's value

.
As for me, I will HODL until I can buy useful stuff and SPEDN.

HODL on
This year has seen intense regulatory pressure on cryptocurrencies and its time we stop pretending that HODL was stupid. It isn't and it wasn't. Anyone who doesn't like the HODL mentality needs to give HODLers something else they can do with their bitcoins.

Trading is no solution for intelligent people. What we need are new ways to use cryptocurrency.
We need BUIDLers and merchants who will let us be SPEDNers.

Steven Hopkins is chief operating officer and general counsel of Medici Ventures, an Overstock.com subsidiary focused on the advancement of blockchain technology.