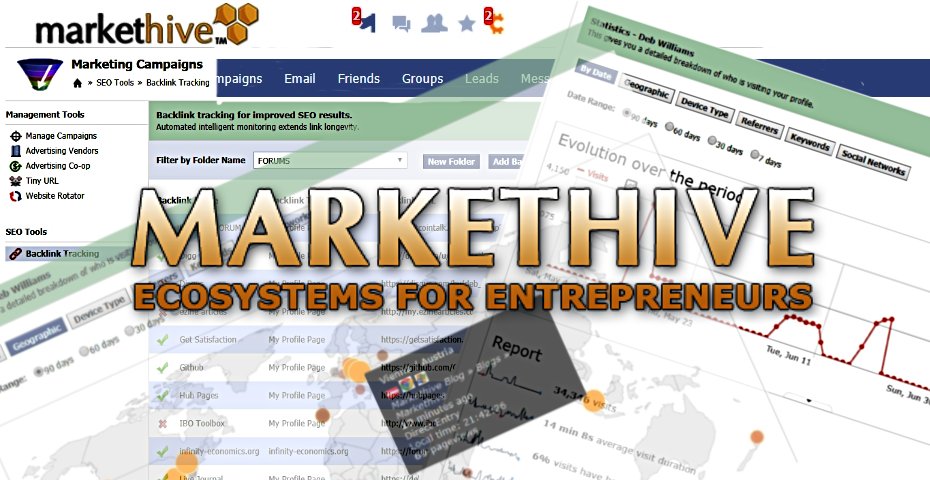 Succeeding by Helping Others Succeed in MarketHive

What do you think about self-help gurus that achieve most of their success (financial or otherwise) through the vehicle of their work as a self-help guru?

What can we say about a motivational speaker who talks about success but whose greatest success is being successful at speaking about success?

I see no problem with this, as long as the speaker is honest.

Problems occur when a speaker pretends to be something s/he is not, such as falsely claiming to be a millionaire through a prior business that was in truth a financial disaster, while reaping massive profits from book and seminar sales that teach people how to get rich.

I believe it’s wonderful to run a business centered around helping people, even one that follows a recursive pattern like helping people help others in the same way you’re helping them. If the demand for such work is there and if it truly benefits people, then this is a perfectly acceptable business model. In fact, I think it’s one of the more intelligent business models available. Why not help yourself by helping others?

I ran a computer games business for more than a decade and enjoyed some success with it. I could have continued to grow that business, but a funny thing happened along the way. I started writing articles to help other independent software developers, and over a period of years, my articles became more popular than my games. In the long run, I had a greater impact by teaching other people how to run a business like mine as opposed to minding my own business. More creative games were released into the world as a result of the articles I wrote, many more than I could have developed within my own company.

As I began writing articles that weren’t limited to software developers, on topics like goal-setting and productivity, my influence widened. Soon people were coming to my games site just to read the articles. Trying to sell games to those visitors made little sense, since most of them weren’t even interested in games.

Eventually I realized I could provide a better service (and ultimately build a better business) by writing more articles instead of releasing more games. It made no sense to continue publishing games when I had all these people coming to my games website looking for personal development advice.

It’s funny that even though I was running a computer games business, my passion for personal growth couldn’t help but come through.

Back then it was hard to get my head around what was happening. At first I saw the unplanned shift in my visitor demographics as a semi-annoying problem. I thought maybe I should stop posting new articles on my site. But eventually I recognized that this was a golden opportunity. If I could attract personal growth enthusiasts to an indie games site, imagine what I could do with a website that was actually focused on personal development. ????

Initially it was hard to step into the role of teacher. I kept thinking of the expression, “Those who can, do. Those who can’t, teach.” It didn’t help that many of my friends and associates in the gaming industry reacted with a similar attitude when I informed them of my decision to start a personal development website and to retire from the gaming industry.

I stuck with my decision though. The demand was too much to ignore. I had inadvertently stumbled upon a better way to provide value to people. The longer I kept publishing games, the more I felt I was wasting time. By holding back on the personal development side, I was robbing people of a better service I could have been providing.

Although I don’t actively encourage people to start up their own personal development websites, hundreds of people have told me they started blogs and websites because of my work, often crediting articles like How to Make Money From Your Blog and 10 Reasons You Should Never Get a Job. Most of those sites were on personal growth topics as well.

At first I wasn’t sure if this was a good thing. I wasn’t worried about competition because I don’t think in terms of scarcity, but I was concerned that there were too many people jumping into the field, and I knew most of them would fail. Most people just aren’t serious about this kind of work and quit within a few months. But some of them committed themselves and achieved great success; many were able to quit their day jobs as a result.

It’s rewarding to visit some of these sites today and see how far they’ve come. They continue to provide a valuable service to their visitors. Moreover, the site owners are contributing much more value than they ever did before.

Most of these newer sites are run by people much younger than I am. For many it’s their first real business venture. They may not have much real-world experience to share, but they do have the desire to help people. This desire pushes them to work on their own growth, so they can have something to share that’s effective. Generally, those who try to fake success don’t get very far, but those who are honest about sharing their journey along the way can definitely provide a lot of value.

It isn’t necessary to be some kind of uber-guru in order to help people. You don’t have to make a ton of money, find the perfect relationship, or achieve your ideal physique before you’re able to contribute. You can start by sharing what you know, which is probably a lot more valuable than you give yourself credit for.

You don’t need to be a guru to write articles like that. It’s not that difficult to share what you know.

How do you know if what you have to share has value? Share it first, and you’ll soon find out. If it provides value, people will tell you. If it doesn’t, people will usually ignore you. As long as you’re getting ignored, keep experimenting by trying to provide value in new and unique ways. Maybe you have a sweet voice and would be better at podcasting than blogging. Or perhaps video would be a better outlet for your creativity. The only limits are in your thinking.

When I released my first independently-developed computer game, it was largely ignored. It took me six months to develop it, but nobody cared. My next game sold a little better, but it was still basically a flop. I tried different game styles and different genres. It took several releases, but eventually I created an award-winning game that sold well for years. It took about five years of trial and error to align my game development skills with creating value for others.

Five years may seem like a long time, but I was coming from a place of knowing virtually nothing about how to run a business when I started. It took a long time to calibrate my skill set to market realities. In the beginning I was trying to create a product to sell, something that would make me money. But in the later years, I focused on offering games that people would love. That is a huge difference in mindset.

When I launched StevePavlina.com, I was able to start providing value to others much more quickly because I wasn’t stuck thinking about making money. I focused on the service side. I soon figured out how to use my skills to give people what they need and want.

I sometimes get emails from people complaining that they aren’t getting rich after blogging for only a few months. One blogger emailed me today to express disappointment that he hasn’t yet surpassed 100 visitors per day. He started his blog less than a month ago. Is it me, or are people getting a little impatient these days?

The most important result to track isn’t how many visitors your website is getting or how much money you’re making. Instead, figure out whether you’re actually making a difference in people’s lives. Are you helping people? Are you providing strong value? If you’re providing genuine value, time and referrals will take care of most of your other key metrics.

Recently I was talking to a friend in the personal development field. Business-wise he and I both had record years in 2008, and we each expect 2009 to blow it away. We joked about the rest of the economy crashing down around us. Why do we feel so optimistic when so many people are nervous? Because we know that we’re providing real value to people. We know that our skills are aligned with contribution. We also have the capacity to do a lot of good for people who are financially struggling, looking for career changes, or feeling uncertain about the future.

Erin is in the same boat. During a recession, more people feel uncertain about the future, and she offers intuitive readings that provide people with great clarity about their lives. Consequently, her income saw significant growth last year as well. Why? Because her skills are aligned with helping people get what they need.

Helping people grow is a service that’s in very high demand. It doesn’t matter that we’re in a (media-fueled) recession. That just means people are more keen to reduce low-value expenditures, and they’re more sensitive to spending money wisely — on purchases that provide the best bang per buck for them. If you’re providing weak value, you’re on shaky ground during a recession. But if you’re providing solid value that meets human needs, a recession can create even bigger opportunities for you — people will drop the fluff from their lives and seek you out instead.

When your business model is no longer fed by sufficient demand, you can always switch to doing something else. But if there’s one thing humanity needs right now, it’s for more of us to step it up and embrace our true potential instead of settling for the limited roles assigned by our social conditioning. In our current environment, there’s still plenty of room for more people to start businesses based on helping and encouraging others to grow. We’re a long way from being over-saturated in this area.