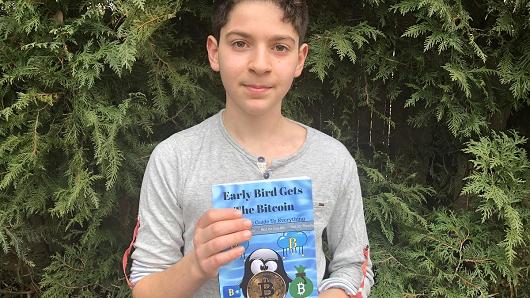 Like most sixth graders, Andrew Courey is usually playing sports and toying with his iPhone when he's not in school. But unlike most other 11-year olds, he's also an expert on bitcoin.

Courey is the author of "Early Bird Gets The Bitcoin: The Ultimate Guide To Everything About Bitcoin," which he self-published for the Amazon Kindle in January. The e-book sells for $2.99, and the paper copy, just released, costs $9.99.

The son of a tech investor, Courey loves math, enjoys tinkering with mobile apps and frequently comes up with business ideas. At one of his recent basketball games, upset with a foul call, he walked over to his dad on the sidelines and suggested creating the "Glassdoor for referees" — a website for grading officials.

Last year, he was looking for investment opportunities as part of an ambitious plan to earn $20 million by the age of 14, which would enable him to drop out of school, according to an agreement with his parents. Courey came across bitcoin and began reading stories and watching YouTube videos about miners and early investors who had made a lot of money from the digital currency.

Given the run-up in prices last year, when bitcoin surged almost 17-fold, Courey wasn't sold on the currency as an investment. But knowing that his son was looking for sources of "passive income," Jeff Courey, Andrew's dad, convinced him to write and sell a book that could put all his research to good use and simplify the many complex ideas around bitcoin and blockchain.

"Anyone can learn about cryptocurrencies if they're willing to spend 70 to 80 hours researching every source until they find a couple sources that make sense," said Andrew, who lives with his parents and younger sister in Wellesley, Massachusetts. "The whole book, in the simplest terms, is very easy to read and simple to understand."

The book is 57 pages and includes chapters on the history of bitcoin, bitcoin wallets, the cryptocurrency ethereum and initial coin offerings, or ICOs. The title has two meanings, with early bird serving as a reference both to kids, for whom the book is written, and the idea that the people who got into bitcoin early made fortunes.

One of Courey's main objectives with the book was to find real-world analogies to bitcoin and blockchain so that complete novices (kids) can grasp these foreign and very complicated concepts. For example, he compares the distributed ledger technology blockchain to a Google Docs file "shared with everyone that can only be edited by buying or selling bitcoin."

In describing a bitcoin wallet, where currency is stored, Courey writes that there's a public key that's available to anyone and a private key that only the owner can access. Here's the analogy: "Imagine there is a mailbox — the mailman can drive the mail to any mailbox, but only the person with the key can access the mail."

Courey concludes each chapter with a "fun fact" related to the topic. At the end of the chapter on bitcoin mining, he writes that the current power consumption required for mining "is estimated to be more than that of 159 countries."