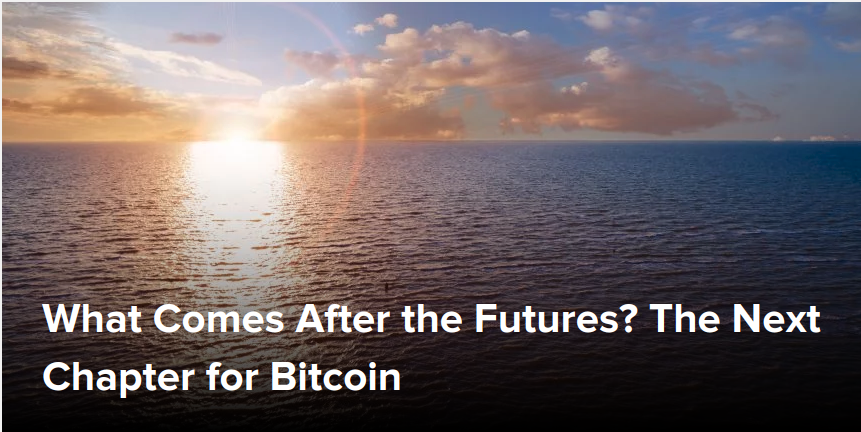 What Comes After the Futures — The Next Chapter for Bitcoin

On the ninth anniversary of Satoshi Nakamoto's white paper, one of the world's most respected derivatives providers, the CME Group, announced it would launch a regulated bitcoin futures market.

Not to be understated, this was a pivotal moment in bitcoin's history, and quite simply, the future has never been brighter.

The price has moved hand-in-hand with these metrics, and bitcoin has reached more people than ever before.

Yet, many of the existing trading platforms have been struggling to stay online 24/7. (Even the CBOE website went down as it launched its bitcoin futures market.) In the majority of cases, these outages are not due to denial-of-service (DDOS) attacks, but the sheer volume of organic traffic.

And with this interest, the futures markets are effectively embedding bitcoin into the traditional regulated markets, adding legitimacy for those that doubted its longevity or who still believe it is a fraud (See: Jamie Dimon). Nevertheless, some bitcoin advocates take issue with the seal of approval from Wall Street.

"I am uniquely allergic to the word 'legitimacy,' it makes me want to vomit when warmongering, war profiteering bankers use it to describe bitcoin. That takes a lot of audacity."

And it does seem there's reason to suggest Wall Street isn't directly behind this year's growth.

On March 10th, the Bats BZX exchange had its bitcoin ETF application denied by the SEC due to the unregulated and illiquid nature of bitcoin markets. The decision marked the end of a three-year journey for investors Cameron and Tyler Winklevoss, who had long sought to bring such a product to market.

Bitcoin has faced many regulatory challenges in its history, most at the hands of regulators: the LedgerX ETF denial, Chinese regulators halting zero-fee trading and ultimately closing all exchanges.

However, the market capitalization of bitcoin has risen from $20 billion to well over $300 billion in the nine months since those developments.

That's not to say that Wall Street isn't bringing new interest to the market — far from it.

The futures markets have shown that investors want to gain exposure to bitcoin in a regulated manner without having to store the underlying asset. For the average investor, there's a lot of risk is involved with holding bitcoin and this is represented by the significant premiums.

But, aside from the pushing up the price and generating media coverage, the futures market will have profound effects on bitcoin.

Increasing demand will likely lead to more futures markets and creating greater volumes over time. There are currently over 15 applications pending for new ETFs, the volume is coming and to quote Antonopoulos again, there is a long way to go:

"When you watch a trader eat a sandwich while he presses enter on a $10 billion trade, you realize how small this game is. We are going to have a lot of volume and that's not bad, in fact that is the first step to reducing volatility."

The 2017 bull run combined with scaling tension has led to a sustained increase in bitcoin volatility over 2017, breaking the five-year down trend.

The regulated futures markets and potential ETFs may be the antidote; deepening liquidity, closing the spreads and reducing the volatility, all of which will contribute to greater market efficiency, price discovery and ultimately ensure bitcoin will be a better store of value and medium of exchange.

But regardless of the tempting volatility, no sophisticated traders will jump into bitcoin without arming themselves with knowledge. It takes a time and breadth of disciplines to understand bitcoin and its many intricacies — as well as a little bit of faith.

To that end, the "education" phase is well underway, in fact the CFTC (Commodities Futures Trading Commission) launched an online information portal days prior to the bitcoin futures launch. Its aim is to educate the public on digital commodities.

This period of research and analysis will have many positive externalities ranging from more effective regulation to greater capital allocation efficiency within the crypto economy. So far, investing within the bitcoin ecosystem has largely been haphazard. Almost every single bitcoin company has underperformed against bitcoin itself.

A greater understanding of bitcoin will foster an ecosystem that allocates capital with greater efficacy, creating the value feedback loop more prevalent in cryptocurrencies such as ethereum.

Every healthy futures market needs a mixture of speculators and hedgers that hold the underlying assets. Typically for markets run by CME, this may be farmers looking to lock in the price of their harvests by short selling contracts of wheat, corn, etc.

Today, the bitcoin futures market is mostly comprised of speculators, and there is a lack of natural sellers as most traders would have to naked short (short without holding bitcoin). At Interactive Brokers, precautions are so great you need five times the collateral to make a trade. For a contract of $100,000, a trader would need $500,000 as margin.

"The history of bitcoin is shorts getting rekt, constantly."

Still, the ability to hedge the price of bitcoin alters the risk profile of other parts of the industry, particularly mining.

Expect more risk-averse companies to venture into mining industry. After announcing they would start mining the top 10 cryptocurrencies Digital Power Corp. saw a stock appreciation of 750 percent. Digital Power are not alone and numerous tech companies are jumping aboard the mining bandwagon.

With the ability to short sell bitcoin to "lock in" mining profits, these companies can do so with drastically reduced risk. For companies like Digital Power, instruments that provide shorting on indices will be invaluable. If this trend continues, Western mining corporations could start to chip away at the currently centralized mining hash power, with 80 percent of it residing in China.

But, it will take time for volumes to build and spreads to close as only a limited number of sophisticated investors are currently capable of carrying out the risky cash and carry arbitrage. No doubt that uncertainties surrounding forking, scaling and regulation will make bitcoin’s journey to an efficient market bumpy.

The most interesting part of bitcoin's rise to the regulated economy is that it took eight years of clamor, belief and HODLing.

To be sure, though, there's more hard work ahead.