Every day, 81-year-old Roberta takes a stroll down her driveway and back to her Charles County, Maryland home.  It was business as usual for Roberta last Friday, but instead of stopping at the end of the driveway, she just kept going.

Roberta and her daughter live together, so when the daughter realized her mother had been gone for far too long, she called 911. Her daughter informed officers that her mother had dementia, and was assured they would find her soon. After about 40 minutes, a small team of officers found Roberta walking along a wooded path near her home.

Instead of embarrassing the sweet lady by informing her of her mishap, they pretended to be out for a walk too, hoping to guide her back in the process. And so, Officer Morrison was captured walking hand in hand with his new friend Roberta… gently leading her home.

The Charles Country Sheriff’s Office posted the photo and caption below. 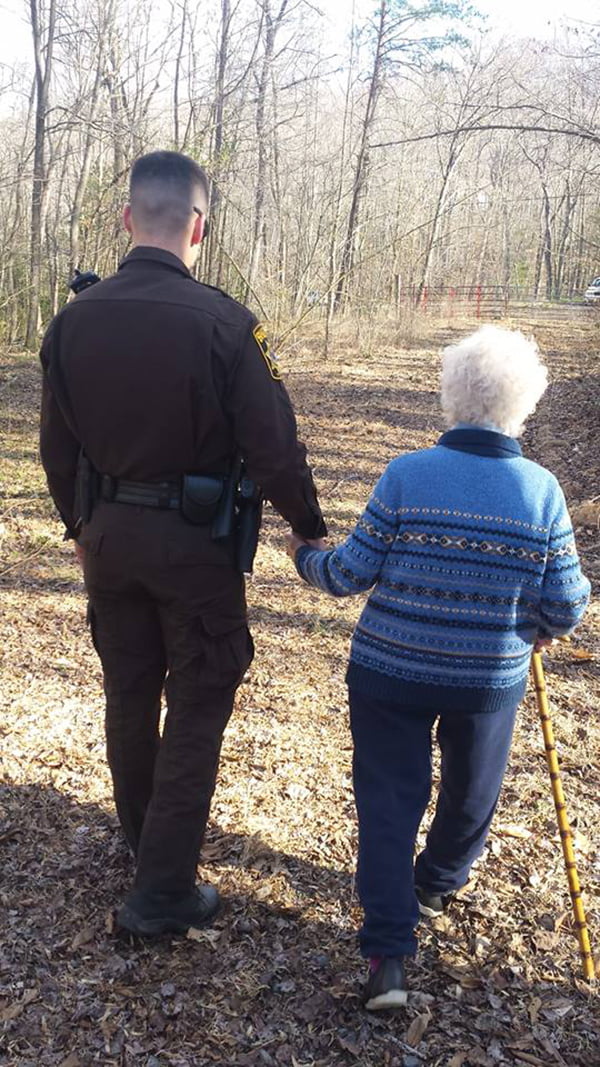 “We often talk about the rewards of police work. On Friday, we captured a moment.

Officers responded to a 911 call from a woman who reported her 81-year-old mother missing. It seems her mother left her house to take her daily walk up and down the driveway, but when she didn’t return, things got a bit scary because the woman’s mother has dementia.

Officers P. DeBoe, C. Caywood, B. Morrison, Sgt. C. Black, and Cpl. C. Clevenger and his K9 partner responded to the scene and began a search of the heavily wooded area.

After 40 minutes, the woman was found.

At first, she seemed confused at the sudden appearance of police officers on the tree-lined trail, and she asked if the officers were out taking a walk too. They quietly replied ‘Yes,’ after all, it was a beautiful day. And then she seemed relieved and told them she had lost her way. ‘No problem,’ said Officer Morrison who then gently took her hand and, along with the other officers walked her back to her house.

Along the way, the officers made small talk with the woman, to make her feel at ease. When asked what the key to a long, healthy life was, the woman replied, ‘Eat good and stay active.’

Officers encounter different situations every day. Some good, some not so good. In this case, a frightening situation for the family ended happily. For that, they were thankful. For us, it’s the rewarding part of policing.”

Here’s to our boys in blue!  Share their gentle heroics today!