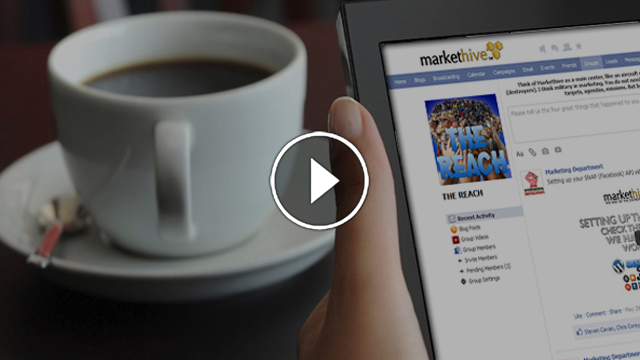 When the advent of a real Market Network (Markethive) and a real emerging Customer Centric network marketing giant (Valentus) even I was surprised with the ease of building a new empire in this industry. Let me explain.

I have been an advocate for ending the business practices of buying and selling leads. And an end to spam email, spam faxes, telemarketing, ending popup ads, bill board ads, you know, the practice called outbound marketing. It was heavily relied upon in the days before the Internet a long time ago and has suffered a long painful death since the Internet was released to the public in 1991, I know, I was there and have continued to ride this journey called the Internet.

10 years before the Internet I ran an Ad agency in the Silicon Valley and was very aware of tech and the emerging Internet, which is why I was on the Internet almost the moment it was available to the public in 1991.

Within years of immersing myself into the Internet, I became aware of Network Marketing. I found it fascinating that anyone with some skill and determination could reasonably build a living income. This idea supported my empathetic support of struggling prodigies, up and coming entrepreneurs and anyone who had greater dreams than the typical job afforded them.

Although I was aware of buying mailing lists for my ad agency in the 80s I was not aware of the pushing of buying names and phone numbers for MLMers to call on people supposedly interested in a business opportunity. As I become more aware of the MLM industry, I also found that most leaders who had working spheres of influence, would tell those they recruited into these pyramid schemes (the majority of these people did not have large spheres of influence) to buy these leads and cold call them.

My instincts told me this was a bad idea and a serious mistake. But these “leaders” promoted this technique because they had no real option on helping these people that just enrolled into one of these pyramid schemes “that really was just another “Hopes and Dreams” pitch, and that is another story.

This became painfully clear when I was witness to such a salesman, who had a talk show, had published many books, had a strong following, had joined a newly launched MLM deal, was conducting a teleconference call with all the people he had recently recruited into this new opportunity MLM. On that call, he told all the 1000s of listeners to go to his friend and buy the leads they had allegedly pre interviewed at about $100 per 10 leads.

This was mid-1990s. I bought 100 of them at $1000 and called them all (another article) and the results were 80% insults, 15% hang ups and the rest no answers. Not one was aware of any interview and the rejection level was as high as it gets. This was a process that would eliminate anyone new to the MLM process from continuing on in any business. Rejection is a process only boiler room telemarketers and well-seasoned sales people can withstand. It is death to the average Mom and Pop trying their hand at MLM.

Emerging Markets, Paradigm Shifts, Trends and all the other annoying clichés.

There are two firmly entrenched trends that have been born in the Internet, because of the technology, the reach of technology and the emersion of the masses into the technology, primarily due to the Social Networks, that Customer Centricity and Inbound Marketing emerged. Think of them as brother and sister.

I have been advocating Customer Centricity for the Network Marketing industry for over 10 years now. Less than 1% of said industry understands it, the rest uninterested, and continue to promote the failed process of selling “Hopes and Dreams” of thinly veiled pyramid schemes with over priced products that rarely accomplish what they claim they do.

However there have been a few that moved towards the “customer centric”, but not fully with one in particular, abandoning the entire concept, only to find that decision is destroying the company as we speak, with commissions being cut consistently for the past 3 years, causing a drastic end to growth and a company in disarray. The other company built a customer option with infomercials, as a reward for their peak performers to acquire said such infomercial leads, which has dwindled due to current trends away from traditional Cable TV and Dish TV. Those 2 companies are Trivita and Beach Body.

Here is the summary of my Customer Centric proposal for this industry.

With the accelerated market place awash in innovation and technology, technology that puts the human element right into the center of the equation, you can understand why you see the MLM industry sluggish and many companies dying on the vine and others falling flat on their faces with their much heralded launches. Entrepreneurs (distributors) that once upon a time, a flashy video, a charming pitch man, and a compelling comp plan, worked to explode the next greatest MLM launch. Not anymore!

It is only a matter of time a young bold, innovative entrepreneur launches the first true customer centric MLM similar to the framework I have discussed here. And when they do, the world will quake, the swamps will empty and the first multi trillion MLM enterprise will rise to stand head to toe with the great innovations today like Facebook, Google, PayPal etc.

Inbound Marketing is the most effective marketing method for doing business online. Inbound marketing focuses on creating quality content that pulls people toward your company and product, where they naturally want to be. By aligning the content you publish with your customer’s interests, you naturally attract inbound traffic that you can then convert, close, and delight quickly.

What Is A Market Network?

“Networks” provide profiles that project a person’s identity, then lets them communicate in a 360-degree pattern with other people in the network. Think Facebook, Twitter and LinkedIn.

What’s unique about market networks is that they:

The amazing timing of this entire process is the emerging of the first Market Network; “Markethive” and my friend “David Jordan’s” company Valentus the first real Customer Centric company.

Valentus is experiencing record growth and record time and by all indications is about to enter into “Momentum”. I credit all of this to the fact that Valentus has the foundational product that the markets support the retail price organically where distributors buy the product well below the market retail.

I know this all seems so complex, but in reality it is quite simple. Valentus’ explosive growth is because it is a real business based on Economics 101. “Buy low sell High”!

With the fusion of these two huge trends found in Markethive and Valentus, I give credit to this phenomena as to my ease in exploding the growth of my little “distributorship” in Valentus, breaking records in the first month and the meteoric growth of this organization because Inbound Marketing (Markethive) has found Customer Centricity (Valentus) and the rest will be historic.

If this article finds you the least bit excited, curious or at least amused, I invite you to find out yourself more about these two incredible trends and how they complement each other. Your curiosity will cost you nothing. Sign up for these two companies at the below addresses:

Entering a phone number will assure that I will call you to introduce myself and enjoy a 5-10 minute chat with you. I look forward to that, BTW.