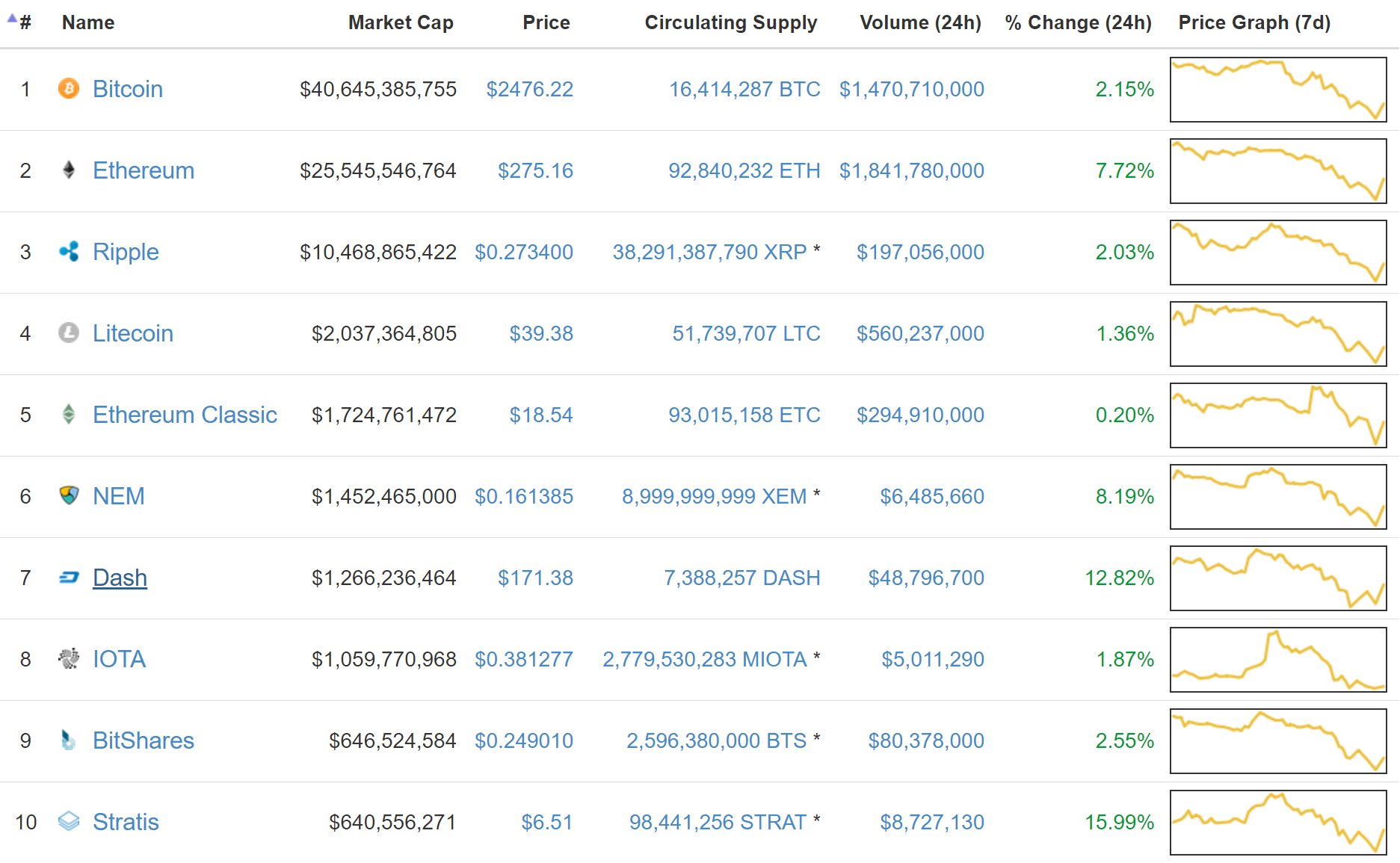 The cryptocurrency market takes a turn to the green, led by Ethereum and Bitcoin.

After two days of the so-called ‘crypto correction’ in the final days of June, the wider cryptocurrency market is seemingly back on a comeback trial as all top ten cryptocurrencies by market cap make gains over a 24-hour period.

According to CoinMarketCap, all but two of the top 50 cryptocurrencies have taken a positive turn during Tuesday’s trading period. At press time, only Bytecoin, the original anonymous crypto which made a 250% jump in May and Ardor, a blockchain-as-a-service platform, see their respective tokens fail to make gains at the top half of the table.

Ethereum leads the way among the big dogs, with a near 8% gain as Ether prices return to hitting above $275. Bitcoin, up over 2%, is trading just above $2,475. Ripple, Litecoin and Ethereum Classic are following the trend. Dash, at #7 on the crypto-ranks, is up nearly 13% at over $170 per DASH.

Today’s upward gains will come as respite during a dramatic few days for the cryptocurrency market. Rewund back to mid-June, the entire cryptocurrency market cap had struck $117 billion. At its lowest point on Tuesday, the combined market cap of all cryptocurrencies in circulation had fallen to $88 billion — a wipeout of $29 billion in two weeks. Monday, in particular, saw 92 of the top 100 cryptos hit red, with the IOTA’s IOT token and Ethereum taking the biggest falls.

Tuesday didn’t start off on sound footing either, as Ethereum fell nearly 20% to a low of $227.14 today, a near 4-week low. A mainstream rumor that Ethereum founder Vitalik Buterin died in a car crash didn’t help matters.

Ultimately, the downturn that began on Sunday evening could have ultimately proven to be the pause the market needed following significant gains in recent months. A breather helps. It never was, nor will ever be a sprint. It’s summer time, after all. Everyday investors, having helped boost entire cryptocurrency market leap from $28 billion in mid-April to a dizzying $117 billion in mid-June, could be closing their positions for profits during summertime.

“All that really happened today was some newcomers and bull traders got discount coins,” wrote CCN’s P.H. Madore amid Monday’s gloom. For others, these last few days have merely been an exercise of holding on.