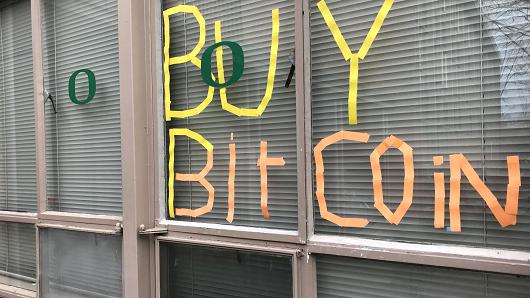 If the NYSE has its way, a risky leveraged ETF which doubles the return of bitcoin could soon hit the market

An improvised message tells passersby to "buy bitcoin" on the University of Oregon campus in December 2017 — the same month the cryptocurrency's price rocketed from $10,000 to nearly $20,000.

The New York Stock Exchange has asked the Securities and Exchange Commission to allow it to list five bitcoin-related exchange-traded funds (ETFs) on one of its markets, according to an SEC filing.

The ETFs were created by Direxion Asset Management to track bitcoin futures trading. While they are not tied to the price of bitcoin itself, the funds aim to multiply investor returns when compared to the underlying market, the filing said.

The instruments, named 1.25X Bull Fund, 1.5X Bull Fund, and 2X Bull Fund, will leverage "investment results (before fees and expenses) that correlate positively to either 125%, 150%, or 200% the daily return of the target benchmark," the filing said.

For each fund, that means a 1 percent rise in the price of bitcoin futures should result in a per-share gain of between 1.25 percent and 2 percent, depending on which Bull Fund is used. However, the potential for higher rewards also comes with higher risk: If the price of bitcoin falls, investors' losses would be multiplied by 1.25.

As such, the funds are not intended for long-term investing, the filing said. The NYSE has issued several filings related to the bitcoin market, including for bitcoin-related ETFs, with the SEC.

If the SEC approves this request, the five ETFs will be listed on Arca, a secondary marketplace on the NYSE. The news was first reported by Business Insider and Reuters.

The NYSE's move comes after two of its rival exchanges, the Cboe and the CME, won approval to list bitcoin futures.

The buzz around bitcoin and its competing digital currencies exploded in 2017, driving a 1,300 percent annual gain in the price of bitcoin. Asset managers have been racing to design more than 10 proposals for bitcoin funds that are currently before U.S. regulators.

New ETFs could make access to bitcoin easier and, in the case of the Direxion product, mean bigger stakes for investors.

The NYSE did not immediately respond to CNBC's request for comment.