Hooked: How To Make Habit-Forming Products, And When To Stop Flapping

We now know that Vietnamese developer Dong Nguyen decided to take down his hugely popular—and habit-forming—game, Flappy Bird because he had a moral pang about the game’s addictive potential. There was speculation about legal problems, or coping with the stress of overnight success, but it seems that he has done what many large tech companies have avoided—taken responsibility for the misuse of his product.

Tweeting as @dongatory a a couple of weeks ago, Dong replied to an obsessed fan, “People are overusing my app 🙁 .”  The following day, in a series of four surprising tweets, he announced, “I will take ‘Flappy Bird’ down. I cannot take this anymore.” (Emphasis mine.)

All of this is familiar territory to behavior design consultant and author Nir Eyal (who also contributes in these pages.) His new book, Hooked: How to Build Habit-Forming Products, is a step-by-step guide to do intentionally what Dong seems to have done intuitively. In its simplest terms, Hooked describes how to convert the “external triggers” that make a person engage with a product into “internal triggers” that bring that person back to it again and again. 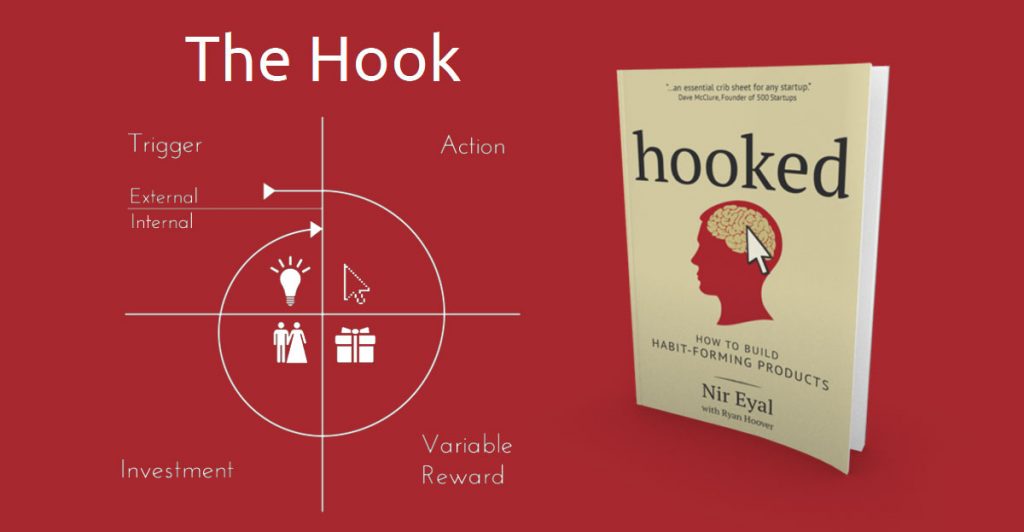 Games, like Flappy Bird are perfect examples of this mechanism, but an easy way for non-gamers to grasp this phenomena is to consider the catchiness of pop songs. When your first hear a song on the radio, you are responding to the “external trigger” of its transmission over the airwaves (or internet as the case may now be.) But when you find yourself involuntarily singing that song in the shower, it has become its own “internal trigger” in your brain. It’s like a client side app where all of the data required to recreate the experience is preloaded into your browser (i.e., your brain!)

Making products habit-forming, and the behavior design that makes it possible, has gone from being a nice-to-have to a need-to-have in the ultra-competitive world of apps and digital services. There are so many things screaming for users’ attention that only the things that they whisper to themselves about have a chance of sticking around for a while.

A research report back in 2011 by Localytics showed that 26% of typical users download an app and open it just once. The important corollary to this disheartening pattern is that another 26% will download an app and use it 10 or more times—often enough for it to become part of their routine. The difference between these two kinds of users—and how to convert the first kind into the second kind—is the focus of Eyal’s “Hook” method.

The Hook consists of four parts that must be combined in sequence to convert an externally motivated engagement with a product into one that is internally motivated and habitual. “Through consecutive hook cycles,” Eyal writes, “successful products reach their ultimate goal of unprompted user engagement, bringing users back repeatedly without costly advertising or aggressive messaging.”

Eyal stands on the shoulders of giants in putting together what is essentially an open source framework for user psychology. This framework draws upon the work of contemporaries like BJ Fogg, Dan Ariely, Charles Duhigg and Daniel Kahneman but also the inventor of behaviorism in psychology, B.F. Skinner. Eyal got an MBA at Stanford and now teaches there, and his debt to Stanford behavior design researcher and educator BJ Fogg in particular is evident.

The essence of Fogg’s approach is to consider a person’s amount of motivation to do something compared with how easy it is to do. You don’t have to be tremendously motivated to do some thing easy, like click “like” on Facebook, but if a product requires an investment of time and/or money, like having your DNA tested by 23andMe, you need a compelling reason. The easier 23andMe can make that process, by requiring less information or lowering the price, the less pressing my reasons have to be to want to follow through. Importantly, no matter how easy an action is, or how motivated a person is, no action will happen without the presence of trigger adjacent in space and time to the means of completing the action.

The first step in Eyal’s hook model is this trigger. He sees the hook as an iterative process which begins with external triggers that after a series of cycles convert into internal triggers. How this conversion occurs is at the heart of what makes this method supremely useful to growth hackers and others involved in engineering the viral aspects of products. Getting back to the example of Flappy Bird above, Eyal points out that “Negative emotions frequently serve as internal triggers.” So the repeated epic failures that a new player experiences with that game make them angry at themselves. This anger is indeed the energy that propels the player to play again.

The second part of the hook is the action itself. The easier it is do something, the more users will do it. Eyal charts the growth of user-generated content from services like Blogger, which require you to actually create original content, to Pinterest, which reduces the participatory action down to the selection of what on the web to “pin.” Guess which one grew faster? There are many dimensions to ease, well-documented by Fogg in his six “elements of simplicity,” than range from amounts of time, money and effort required to levels of mental complexity, social acceptability and habitual familiarity. This is important because increasing your user’s ability to do something is far more within your control than boosting their internal motivation. Human psychology is not a uniform surface that can be wholly controlled by turning a couple of knobs, of course. Eyal emphasizes observed patterns of behavior that can be used as heuristics to increase the likelihood of a given action. We sometimes infer value from scarcity or assume form the presence of a sale tag that something is a bargain.

The third part of Eyal’s method takes advantage of these inconsistencies in how humans evaluate situations to excite our motivational instincts. It is important that product reward the actions that it triggers, but critically, if these rewards are variable we are far more likely to get sucked in. Decades of brain research has concluded that we are more motivated by the anticipation of reward than by the reward itself. In Flappy Bird, most of the time you fail, but the possibility that you could get a high score (or any score at all!) deepens the hook. The trigger is our self-inflicted anger, but playing holds out the reward of self-mastery. Eyal cites Pinterest as an example of the variable rewards of the “hunt.” Finally, when a friend “likes” your high score update on Facebook or follows your board on Pinterest you experience social satisfaction, rewards of the “tribe.” In Eyal’s model, the hook is a series of cycles and just as the triggers go from external to internal, so too can the rewards range from self to hunt or tribe. As described above, both Flappy Bird and Pinterest successfully utilize multiple types of rewards—but always with some degree of variability.

Finally, for the habit to really take hold, the user has to invest into it. The pictures you take with Instagram constitute your investment in the platform. Not only does the threat of losing this body of work keep you from switching to other photo apps, but your social engagement with others on the platform reinforce this continuity as well. By getting us to put ourselves into a product its designers are using our own narcissism to increase our perceived value of their product. Dan Ariely of Duke University, and author of Predictably Irrational and other books, calls this the “Ikea Effect,”  where our time spent with the ubiquitous Allen wrench makes our hearts fonder of the (possibly flawed!) end result. The other aspect of this is that since we are all creatures of habit, our investment in a habit becomes a form of inertia that makes it increasingly unlikely that we will engage in the cognitive dissonance of a new solution to our need.

Hooked is a very useful book for anyone involved in designing, managing and marketing products. It does suffer a bit from a duality of purpose that sometimes stretches the tone of the writing between earnest explication of the fascinations of human behavior to an practical boosterism for how to use of the techniques behind these phenomena. Behavior design is clearly a rising discipline with great effectiveness to help engineer beneficial habits, but it also can—and is—being abused for manipulative purposes.

In the sixth chapter of the book, Eyal discusses these manipulations, but I think he skirts around the morality issues as well as the economics that make companies overlook them. The Candy Crush Saga game is a good example of how his formulation fails to capture all the moral nuance of the problem. According to his Manipulation Matrix, King, the maker of Candy Crush Saga, is an Entertainer because although their product does not (materially) improve the user’s life, the makers of the game would happily use it themselves. So, really, how bad can it be?

Consider this: Candy Crush is a very habit-forming time-waster for the majority of its users, but a soul-destroying addiction for a distinct minority (perhaps larger, however, than the 1% Eyal refers to as a rule of thumb for user addiction.) The makers of the game may be immune to the game’s addictive potential, so their use of it doesn’t necessarily constitute a guarantee of innocuousness. But here’s the economic aspect: because consumers are unwilling to pay for casual games, the makers of these games must construct manipulative habits that make players seek rewards that are most easily attained through in-app purchases. For “normal” players, these payments may just be the way that they pay to play the game instead of a flat rate up-front or a subscription, and there is nothing morally wrong with getting paid for your product (obviously!) But for “addicted” players these payments may be completely out of scale with any estimate of the value of a casual game experience. King reportedly makes almost $1 million A DAY from Candy Crush, all from in app purchases. My guess is that there is a long tail going on with a relative few players being responsible for a disproportionate share of that revenue.

Understanding these potentially conflicting motivations is important for product designers of all kinds, and I believe it is a subject of intense interest to Eyal. Habit-formation is no longer a nice-to-have but a need-to-have aspect of making a successful product. This makes the temptations of manipulation all the more dangerous. We all now need to abide by the superhero credo, that with great power comes great responsibility. Habit-hacking is indeed a superpower, time to put on the capes!