Did Someone Really Just Pay $82,000 for a Single Bitcoin?

Was it a bug? A mistake? Or just a really eager Bitcoin buyer? Whatever it was, an $82,000 wick on Binance has traders scratching their heads.

File this one under “only in crypto.”

While some keen market observers wait for the price of Bitcoin to break it’s all-time high of nearly $20,000, a few traders on Binance—the world’s largest crypto exchange by volume—watched the coin go to the moon today. Even if only for a brief moment.

Bitcoin broke past $20,000 and hit a whopping $82,000… then quickly dropped back down again, as if nothing had happened. Intrigued? So were we… 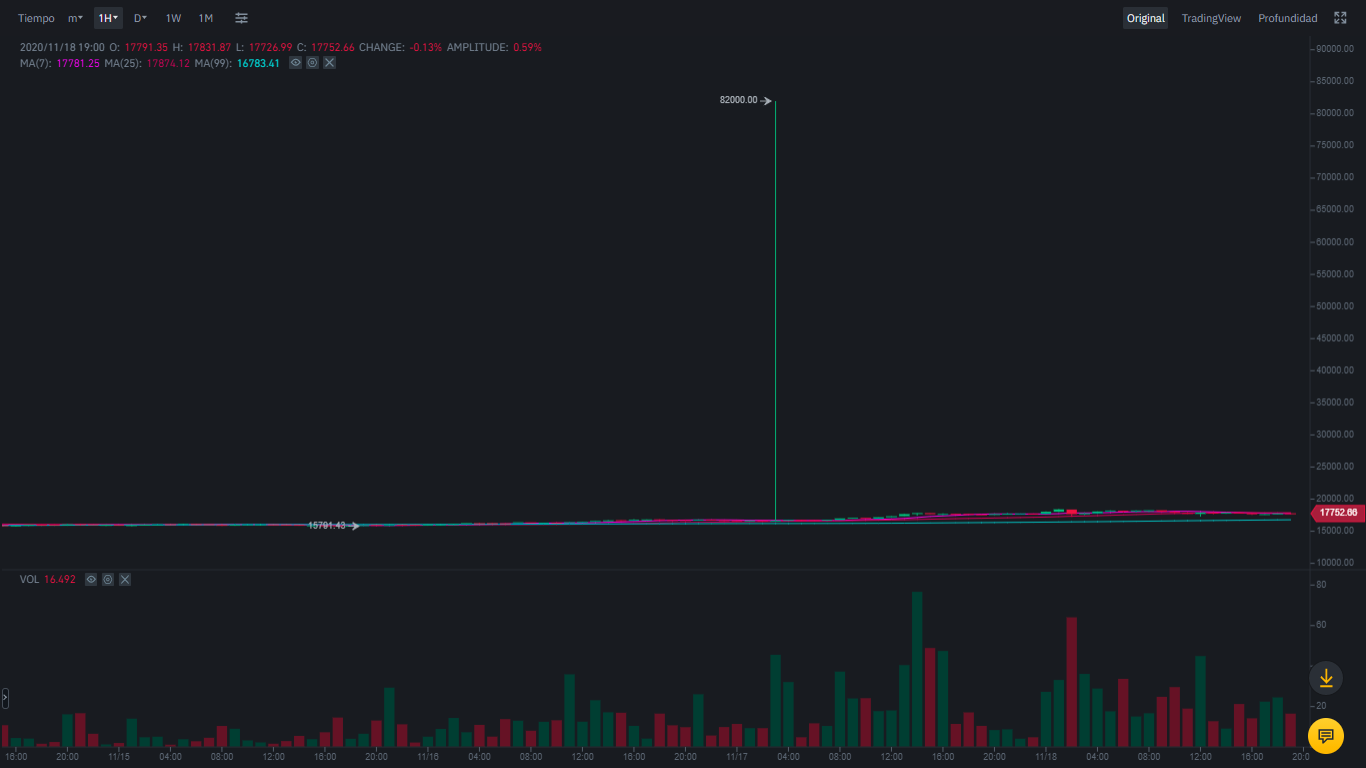 The rest of Bitcoin's pairs against the US dollar or its stablecoin equivalents (USDC, BUSD, DAI, PAX, and USDT) were unaffected. Trading volume during the rally didn't show any anomalies either. There was indeed a spike in volume, but nothing out of the ordinary.

It's hard to know for sure, but considering the relatively low trading volume during the period of time compared to the absurd price spike to $82,000—and the fact that Crypto Twitter didn't go bananas—everything seems to point to some kind of error.

A "human error" by a trader would most likely have activated a row of market orders before touching the $82,000 price mark. It would have taken an enormous amount of money changing hands to organically reach that price, practically depleting the trading pair's liquidity.

With that in mind, a bug is the most logical explanation—at least that we can think of. In fact, similar weird blips have happened on Binance before.

For example, on October 28, 2020, a major “Darth Maul Sword” (a little candle with super large wicks) happened on the ETHUSD perpetual contracts, activating trades at specific prices without going through the standard order matching procedures.

Decrypt has contacted Binance about today’s $82K BTC wick but we’ve yet to receive a response. And the traders we spoke with were as confused as we were. But we’ll be sure to update if anyone comes through with a better explanation.

For now, it’s best not to pull a McAfee and bet any of your body parts on Bitcoin touching that price mark again any time soon.