Cryptocurrency In A League Of Its Own 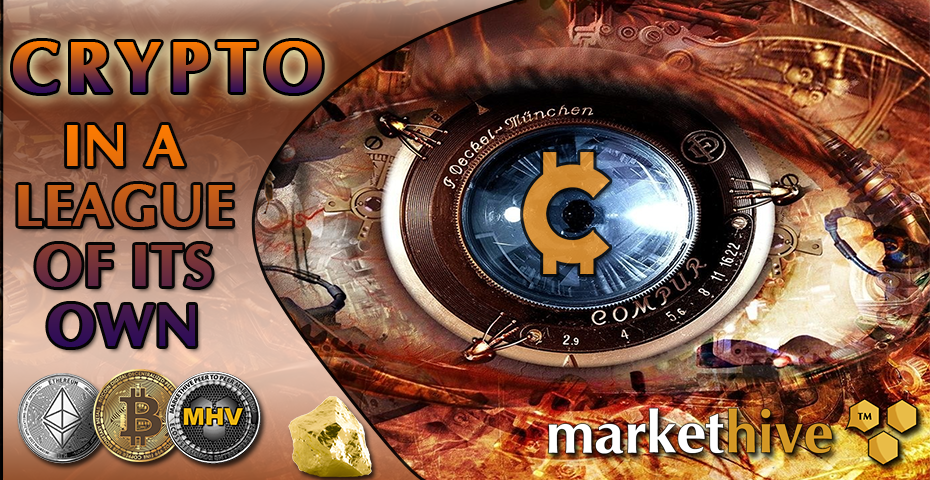 There’s an expanding global community that believes in cryptocurrency as an alternative to the traditional financial system. Bitcoin, being the first and still with the highest market cap is deemed as “digital gold” However the true nature of Bitcoin would suggest it is a class all of its own. Gold’s history as a medium of exchange dates back to 700BC and in modern-day, up until 1971, the gold standard, (where paper money was directly linked to gold which determined the value of any given currencies globally) led the world to believe that gold was a reliable form of money to fall back on.

Historically, the “fiat” currency was born. Fiat comes from Latin and is often translated as the decree “it shall be done” or “let it be done”. So Fiat money is any currency lacking in intrinsic value as it is not backed by the precious metal, gold. It is declared as legal tender by governments and followed through by people’s faith and belief and use of the paper money made legal tender by government decree.  We collectively invest in paper currency because a government entity tells us it is credible, saying “it shall be” currency, prints it, and accepts it as the only valid form of tax payment.

Bitcoin’s advent was realized in the financial crisis of 2008 when society was hit hard by the big bank’s questionable decisions and business practice. Consequently, the bailout was orchestrated by printing more money which causes the money to devalue. The more money around the less it is worth resulting in hyperinflation.

CRYPTO — A Hedge Against Authoritarianism

So arguably, Bitcoin is not a hedge against monetary manipulation, it’s a hedge against authoritarianism. Bitcoin and other altcoins cannot be confiscated and have a strong resistance to governmental powers, unlike gold which is confiscatable and was commandeered from private citizens by the U.S. government back in 1933.

At present cryptocurrency lacks confidence amongst the general population as a form of money, but it certainly acts as a political hedge and is substantiated by the market. As the new financial ecosystem evolves it will be a viable alternative to the traditional money system for consumers and there will no longer be a need to rely on the unscrupulous centralized financial system.

For Cryptocurrency to be adopted in the mainstream and truly taken seriously as money it needs to be a medium of exchange with value and viability. So we have a better chance of understanding the future value of cryptocurrencies let’s see how value is derived. Value is measured by its “goodness” of any given thing. There are certain things that are instrumental goods, in other words, they are goods that we can use to access other goods. Intrinsic goods are valuable in and of themselves and they are the things we work to attain.

It has been said that money can serve no purpose other than purchasing goods. Currencies are instrumental goods. To be effective currencies have to be mediums of exchange and stores of value. So, the value of a currency is in its ability to do those things efficiently and effectively: facilitate transactions and act as stores of value. Can cryptocurrency be both?

Mediums of Exchange Can Become Stores of Value

It also increases when demand is more than supply. Unlike fiat, which can be printed when needed by authorities to pay for things, cryptocurrency has a finite amount and cannot be increased at will, so the more people that use it the higher the value. So we have evolved beginning with trade and barter, then came paper money because it was then a more efficient medium of exchange, however, overtime trust and reciprocity issues have developed and now the new kid on the block, cryptocurrency.

If the value of a currency is affirmed by its flexibility and universal usage, then that currency’s viability depends on its users’ understanding that it is a better facilitator of transactions than other mediums of exchange. For a cryptocurrency to replace paper money users need to believe that instruments like Bitcoin, Ethereum, and MHV are better at facilitating transactions.

What Ways Does Crypto Improve On The Technology Of Paper Money?

Cryptocurrency is a more effective facilitator of transactions than paper money. It’s more flexible, and its flexibility will increase as the network grows. It’s digital, it can be used for international transactions, and particularly for the unbanked. Furthermore, there are no conversion fees, and transaction fees are substantially lower.

The technology of all cryptocurrency is the Blockchain, which is decentralized and deals more effectively with issues of trust and reciprocity than a central bank. Moreover, the distributed nature of the blockchain increases the security of the currency and makes it less susceptible to manipulation or attack than a central bank.

Why are cryptocurrencies important for the future of digital finance?

Much like the internet has forever altered how we live and work, cryptocurrencies have the potential to change how people participate in global financial markets.

Right now cryptocurrencies’ major challenge is to overcome the mainstream of prospective users’ suspicion and become known as a legitimate medium of exchange for legal purposes. It took a long time for paper money to be accepted. The idea of a piece of paper in return for something of real value couldn’t be comprehended. Today’s cryptocurrencies go beyond replacing cash. This new token-based economy is evolving, with unique solutions emerging in finance, security, identification, social engagement, and ownership.

An NYU Stern Professor of Finance, Aswath Damordan is pro-crypto in general and predicts cryptocurrencies will eventually be as important as major paper currencies.

Damordan wrote a blog post, The Crypto Currency Debate: The Future of Money or Speculative Hype? In it, he discusses that the future of cryptocurrencies, as a legitimate form of payment, will have to shake off some of the attributes that make crypto such an alluring and speculative asset especially for the trader. This is because the things that make them so exciting like their price swings, their volatility, their potentially lucrative payoff actually make them terrible currencies.

Ultimately, Damordan says that the cryptocurrency that has the brightest future is the one that thinks about itself “as a transaction medium, and acts accordingly.”

Investing in cryptocurrencies might be a prudent investment, but which one should it be? Considering there are over 2000 cryptocurrencies some underpinned with a solid workable concept but most are just speculative with not a lot backing it. This makes it hard especially for the individual just entering the crypto space.

The real investment opportunity in this field might be not only cryptocurrencies but innovative applications on the blockchain.

2020 so far has been a precarious year worldwide with the financial markets and has affected several economies due to the COVID-19 outbreak. But in terms of adoption, cryptocurrencies have been gaining momentum globally. 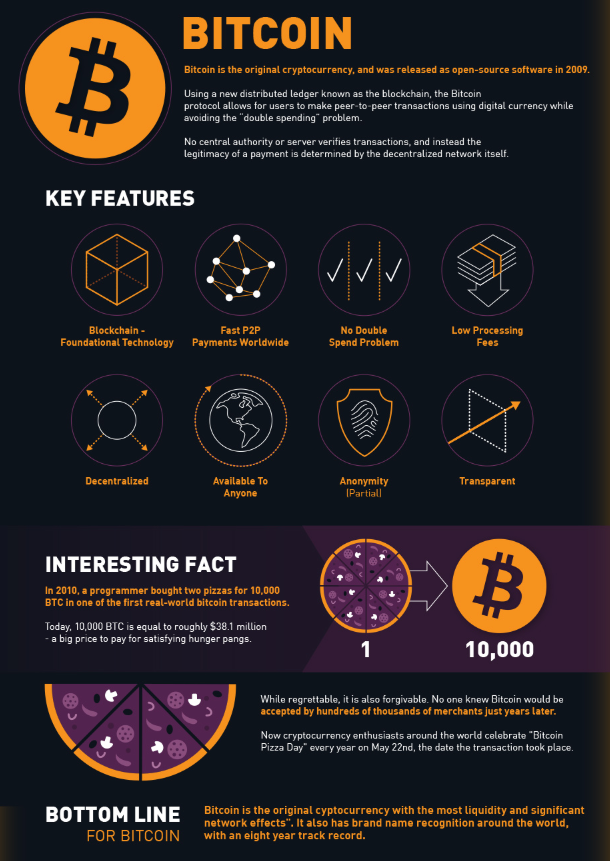 Bitcoin (BTC) is the first that comes to mind for many wanting to get into crypto as it was the first and remains the largest by market cap. However, it is still considered very volatile which you might say is a traders’ dream. From a traders perspective, there are 90% of buyers and only 10% sellers which indicate the majority are buying and holding BTC particularly ahead of the halving event. Historically, the halving event was followed by a bull run, and traders are optimistic 2020 will be no different.

No matter what Bitcoin’s role will be in the future, it will always be seen as the granddaddy and as it stands now, all other altcoins are correlated with Bitcoins price. Currency (as in Bitcoin)  is just one use-case in the bigger scheme of things. Some have argued that other strong cryptos will take over in due course. 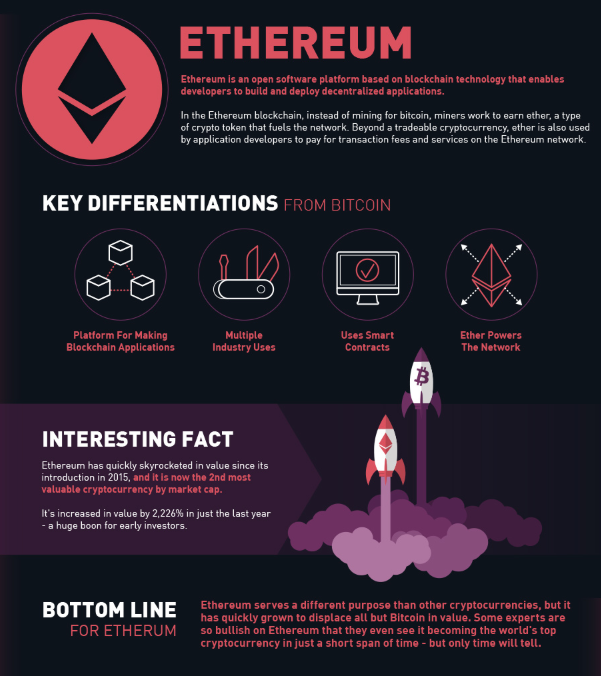 Ethereum (ETH) is the second-largest crypto by market cap and remains the most widely used altcoin. Unlike Bitcoin, the Ethereum network uses a proof of stake system to verify transactions, as opposed to Bitcoin’s proof of work and said to be a more diplomatic format, and cost-effective. This means the Ether Coin is staked instead of mined.

The platform was developed by Vitalik Buterin, the company’s co-founder, in 2011. In establishing Ethereum, he wanted to address the issues of the Bitcoin network, mainly that its approaches were individualistic and create a more multifunctional blockchain solution. 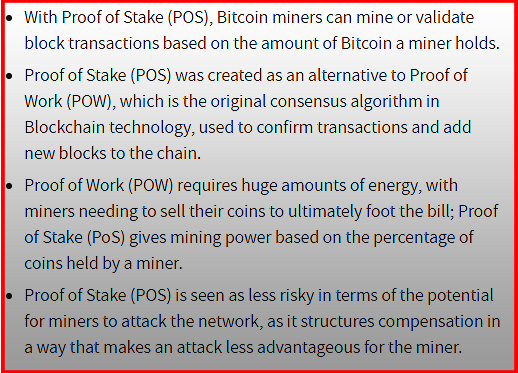 The Ethereum Blockchain has some extraordinary capabilities. Just one of those is the Smart Contracts. It’s a contract that completely handles the enforcement, the management also performance, and payment. A smart contract is a phrase used and is described as a computer code that can facilitate the exchange of money, content, property, shares, or anything of value.

As smart contracts are run on the Blockchain, they run exactly as programmed and are not subject to censorship, fraud, downtime, or 3rd party interference. Ethereum is also being used as a platform to launch other cryptocurrencies/altcoins. This is known as an ERC20 token and allows individual companies and developers to issue their own coin. 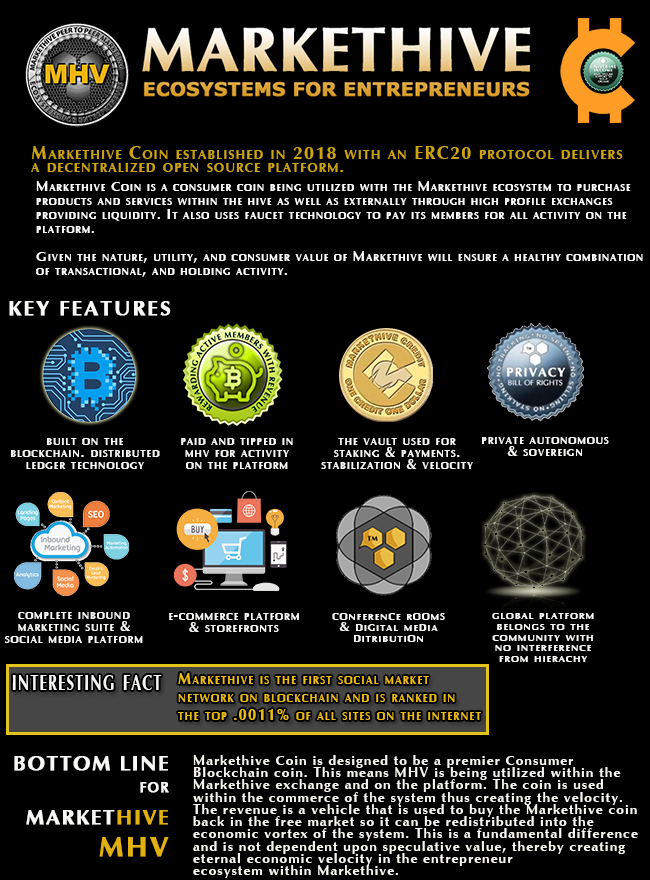 Markethive is a completely autonomous ecosystem consisting of three components. Community, Technology, and Liquidity. Markethive has all three groups to bring this collaborative decentralized platform to life as a viable and lucrative platform where not only can they share in the success of the company, but also where its Entrepreneurial members can make a difference, not only in their lives but in the world. 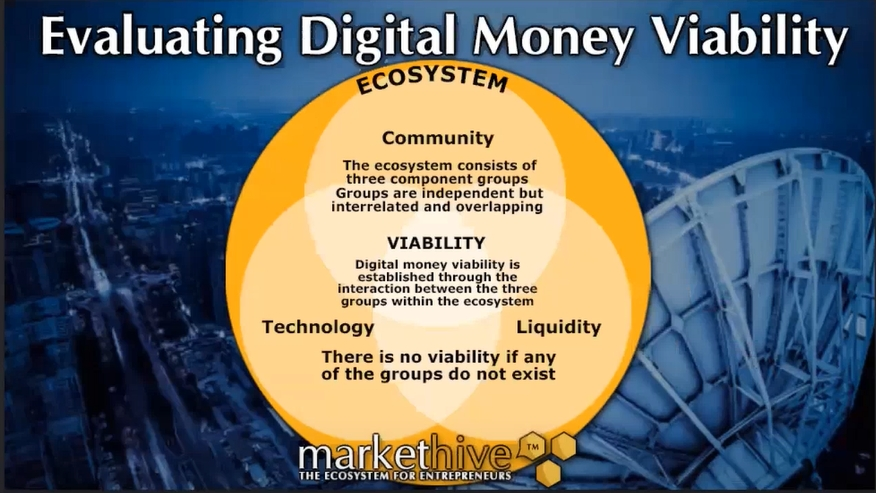 The cryptocurrencies with a true purpose will make their mark in crypto industry history. The ones that are a medium of exchange with the transactional capability that is utilized within and outside the ecosystem which in turn creates a store of value.  Given the nature, utility, and consumer value of Markethive will ensure a healthy combination of transactional, and holding activity.

Markethive has in place, numerous velocity stabilizers including staking, (The Vault), network utility expansion, and the fact it is a cryptocurrency consumer coin, will keep the balance of velocity. This ensures that the velocity is maintained for the initial and long term price of MHV and is indicative of a healthy ecosystem. A strong economy will in turn sustainably increase MHV’s price.

Coins or Tokens that are structured to capture a significant portion of the economic value generated by the network will reward both the investors who took on early-stage risk as well as the platform who can continue to fund development through the retention of now valuable tokens.

There is a huge market looking for what Markethive does. You’re not just buying or earning on the platform to accumulate a coin, your using and transacting with it. Markethive is an eternal economy that has more demand than supply, therefore, the demand will continue to outstrip the supply. The bottom line being the Markethive Consumer Coin (MHV) and Incentivized Loan Program or ILP Token (HFS) will only become increasingly more valuable.

Bitcoin and other respected altcoins will play a big part when it comes to liquidity and the ability to transfer and exchange to whatever currency you desire. So, in fact, they can work in synergy with each other, all with a similar but different purpose.