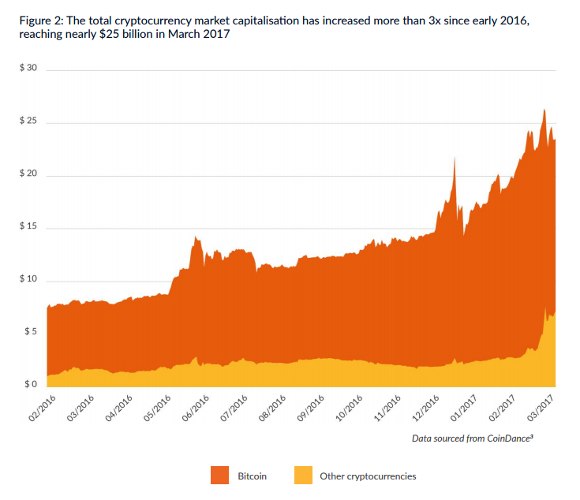 The combined market value of bitcoin and other crypto-currencies is now $27bn, representing a threefold increase since the start of 2016, with bitcoin miners having earned more than $2bn since trading in the electronic currency began in 2009.

These are some of the findings of a new report the Global cryptocurrency benchmarking study by Dr Garrick Hileman and Michel Rauchs of the University of Cambridge.

The authors note that ten years after the publication of a white paper by Satoshi Nakamoto which led to the creation of bitcoin, the crypto-currency markets now have approximately the same valuation as AirBnB, with the value of individual coins, the total number of users and the number of crypto-currencies in use all rising fast.

The prices of bitcoin and "altcoins" such as dash, monero and ether have all rocketed in price in the last 18 months, more than doubling in the case of bitcoin and with monero worth 16 times more than at the start of 2016.

With the future direction of bitcoin uncertain due to arguments about the best way to increase its scalability without centralising power in the hands of a few giant "miners" (generally companies operating a large number of powerful servers that verify transactions on the bitcoin blockchain), alternative currencies such as the ether have risen in importance as a hedge for investors.

The alternative approaches threaten to split bitcoin in two, forking the blockchain. This could create difficulties as there would be two different versions of bitcoin in circulation, and other coins and services built on the bitcoin blockchain and currency exchanges would have to decide which way to go. However, despite the feuding, the price of bitcoin against the US dollar is close to an all-time high.

The transaction fees that miners can earn have risen sharply as the number of transactions, and hence the size of the blockchain, has grown, with users opting to pay more for a quicker transaction time. This has left the big miners with a lot of power and a vested interest in the way bitcoin evolves.

The report estimates the current number of unique actve users of crypto-currency wallets be between 2.9 million and 5.8 million, with between 5.8 million and 11.5 million wallets in active use. The industry is thought to employ around 2,000 people worldwide.