The attack on Twitter that took place earlier this week has once again made Bitcoin a topic of mainstream discussion — but not for a good reason.

A group of rogue hackers — who now appear to be a band of teenagers and 20 somethings who were just trying to make a quick buck, according to a New York Times report – took over the accounts of prominent individuals and companies, promoting a classic Bitcoin giveaway scam.

Despite wielding enough power to move markets, the hackers were only able to make away with just over $100,000 worth of Bitcoin — a testament to the spontaneous nature of this scheme.

It now appears that the ones who perpetrated this hack are in the process of laundering the Bitcoin proceeds, signaling that they are gearing up to cash them out via an exchange.

Twitter hackers receive a total of $121,000 worth of Bitcoin through 400 transactions

Although the scope of the Twitter hack was massive and many compromised accounts shilled the crypto giveaway scam, the impacts were fairly minimal.

According to research from blockchain analytics firm Elliptic, the wallet addresses associated with the hackers only pulled in a total of $121,000 worth of Bitcoin from just over 400 payments.

This means that less than 400 people lost money as a result of the scams.
The analytics firm also revealed that the majority of the victims resided in Asia, followed by North America.

“Payments from Asia-based exchanges dominate, although this includes one single very large payment originating from a Japan-based exchange, worth $42,000. Other large contributions come from victims likely to be in North America — unsurprising given the Twitter accounts affected.” 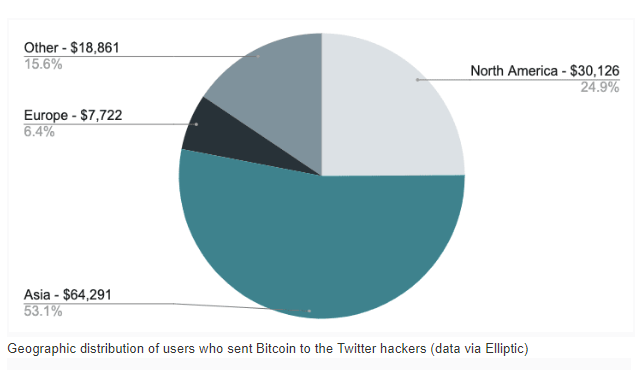 Hacker’s BTC may soon be moved to exchanges

Naturally, the hackers needed to clean the stolen Bitcoin before moving it to exchanges.

Elliptic also revealed in its latest report that 22% of the obtained funds have now been moved to Wasabi Wallet — which is a type of wallet that hides transaction trails, making it difficult for the cryptocurrency to be traced.

“Elliptic has uncovered that at 3.39am UTC this morning 2.89 bitcoins, accounting for 22% of the funds obtained by the Twitter hacker, were sent to an address that we strongly believe to be part of a Wasabi Wallet.” 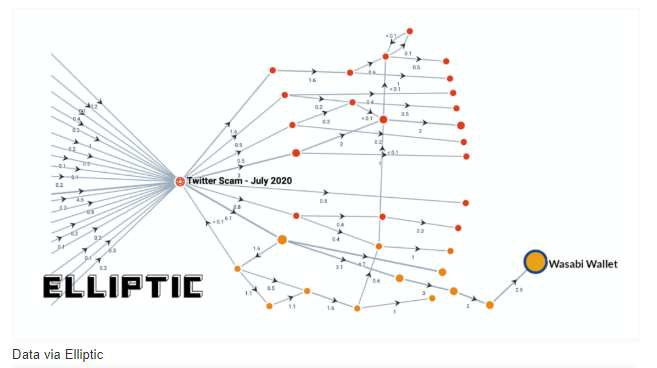 Once laundered through Wasabi or a mixing service, the next step will be to move the Bitcoin to exchanges to convert it to fiat currency.

CryptoSlate will provide any relevant updates once more knowledge regarding the whereabouts of the hacker’s Bitcoin is obtained.