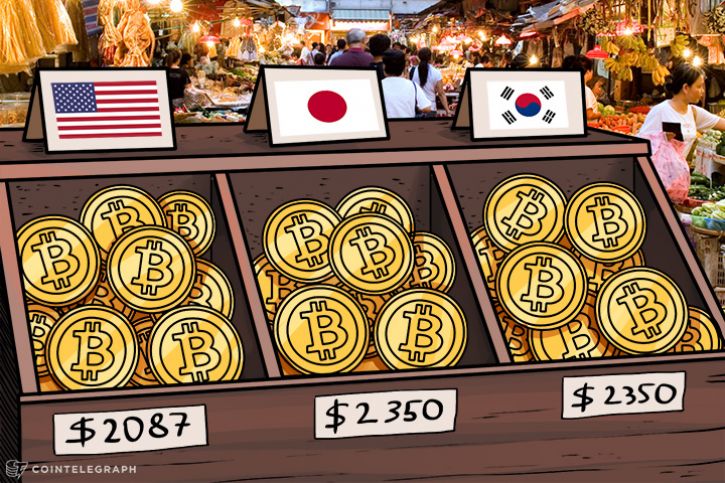 after surging past its previous all-time high set at $2,050, with demand toward Bitcoin rising from institutional investors in the US, Japan, and South Korea. At the time of writing, Bitcoin is being traded in Japan and South Korea, the second and third largest Bitcoin exchange markets in the world, at around $2,350, at an 11 percent premium relative to the global average Bitcoin price and the price listed by US-based Bitcoin exchanges. Analysts including Charles Hayter, the CEO of CryptoCompare, explained that the Japanese and South Korean Bitcoin exchange markets played a key role as the driving factor of Bitcoin’s recent price surge. In an interview with CNBC, Hayter stated:

"Arbitrage between the fiat pairs drags markets up or down in line with leading markets. At present, volumes on the KRW and JPY pairs dominate trading with a combined 48 percent market share.”

Cointelegraph previously emphasized the importance of the Japanese and South Korean exchange markets on the global Bitcoin market. The two markets hold over 48.6 percent of the global bBtcoin exchange market share and represent the vast majority of institutional investors within Asia.

Japan, in particular, has experienced an explosive growth in demand for Bitcoin as some of the country’s most influential conglomerates announced the launch of their independent digital currency exchanges, with the vision of facilitating fiat-to-digital currency trading securely and transparently, with low fees.

Cointelegraph reported that a significant number of investors have started to fuel an altcoin bubble concentrated around Ripple and NEM. IndieSquare co-founder and Japan-based researcher Koji Higashi stated that the legalization of digital currency and the tax exemption of Bitcoin convinced beginner and casual cryptocurrency traders that every other cryptocurrency is legitimate and well-based. However, Higashi noted that most investors are investing in cryptocurrencies apart from Bitcoin with relatively shallow knowledge and understanding of digital currencies.

“I think I know the answer now. Newly entering Japanese investors are driving this great altcoin bubble and not-so-smart money is flowing into the space especially into some altcoins at a rather concerning rate. Another thing to note about this new trend is that the general lack of understanding or appreciation of the technology by many of new users.”

In the next few months, as Bitcoin maintains its momentum and upward trend, it is likely that the Japanese cryptocurrency exchange market will demonstrate some stability and see a decline in interest over alternative cryptocurrencies or altcoins. If so, the demand for Bitcoin will likely increase over time. Currently, analysts and researchers at mainstream media outlets such as CNBC and Bloomberg are attributing Bitcoin’s recent upward momentum to the economic uncertainty and instability of the US. This is a rational conclusion considering that the US replaced the Japanese Bitcoin exchange market for the first time in the past 12 months to become the largest Bitcoin exchange market.