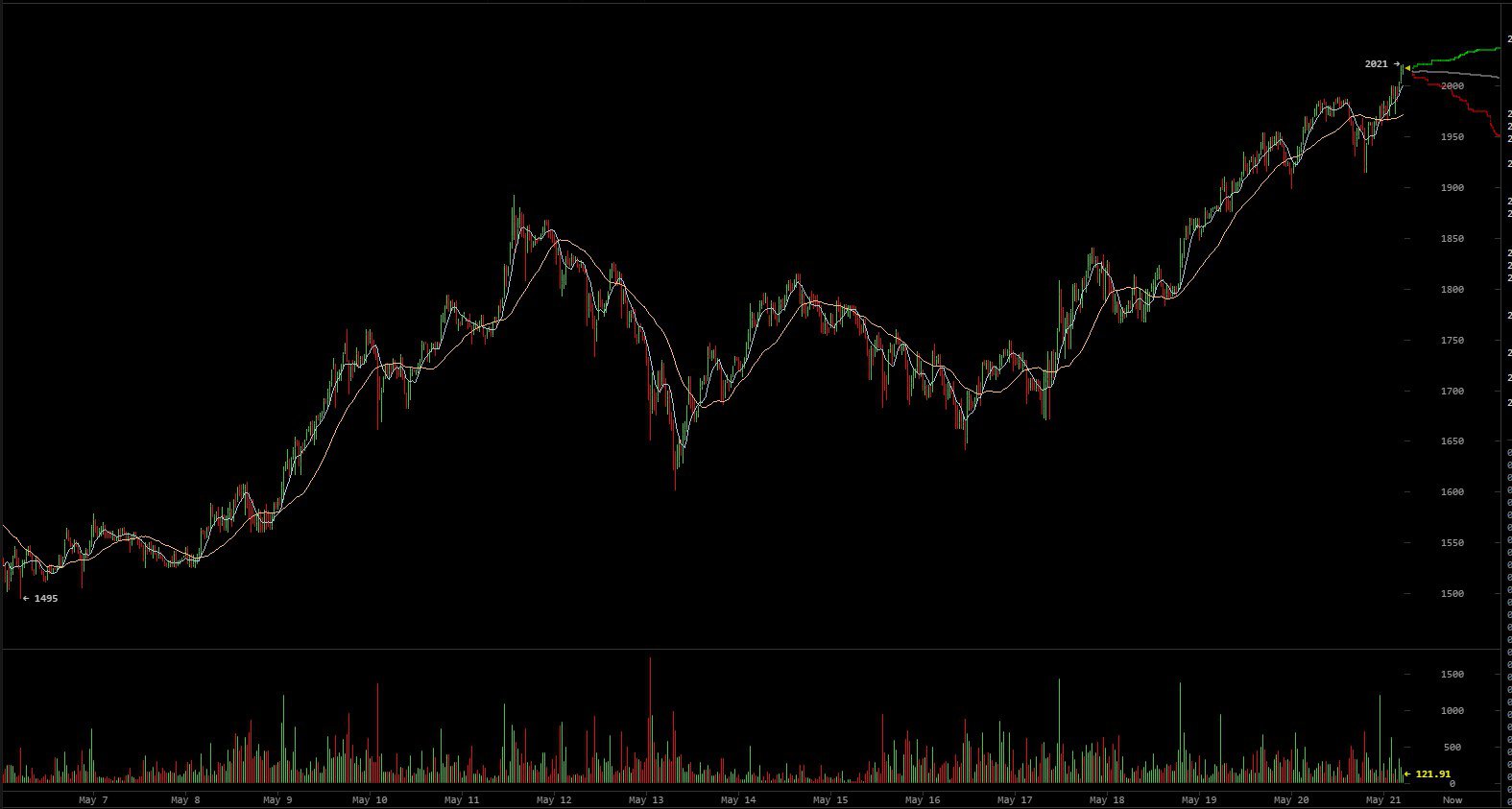 Bitcoin price has, for the first time in its history, reached $2,000 and beyond during trading on Saturday.

The world’s most prominent cryptocurrency began trading in 2017 at $1,000 per coin, with today’s new all-time high representing a doubling of value for bitcoin. On an average, bitcoin price climbed to $2,040.88 in global trading markets. On the Bitstamp Price Index (BPI), price struck a high of $2,020.

Trading leading into Saturday saw global average prices climb to $1,968.48. A steady period of trading during the day saw prices climb throughout before crossing the symbolic $2,000 milestone at 18:00 (UTC) on Saturday.

“Nearly seven years ago to the day, the first real-world Bitcoin transaction was completed in Florida, when two pizzas were bought for 10,000 bitcoins,” reminded eToro senior markets analyst Mati Greenspan in conversation with CCN. “If you’d invested $100 in bitcoin that day and left it there, you’d be sitting on over $20 million right now.”

Intriguingly, trading over the last 24 hours was led by US markets followed by Japan, the inverse of recent trading trends of the past few months. Bitfinex, GDAX and Bitstamp led the way in the US marketplace, altogether leading to over 35% of trading in the past 24 hours. Trading markets in Japan, China and South Korea combined for over 45% of trading volumes.

Bitcoin prices have gained 50% in May alone, a month that saw bitcoin in the headlines for being abused by ransomware extortionists behind the global WannaCry cyberattack.

“One might have expected that the WannaCry cyberattack — in which hackers asked for payment in Bitcoin — would have had a negative effect on price, but it seems like not even a ransomware attack can prevent the rise of Bitcoin,” Greenspan added.

The analyst also revealed that bitcoin’s soaring gains hasn’t put off existing investors from continuing to invest in the cryptocurrency. “Bitcoin is gaining some serious momentum among investors on our platform, with 88% of Bitcoin traders still buying the asset.”

Bitcoin’s flourish comes during a time of marked gains for the wider cryptocurrency ecosystem, led by the likes of Ethereum, Litecoin and Ripple.

After hitting an unprecedented $100 for the first time on Thursday, Ethereum’s ether token is now trading above $125.

Altogether, the entire cryptocurrency market cap is now valued above $70 billion, up from less than $30 billion a little over a month ago.