Bitcoin Price Analysis — The bottom is likely in

Bitcoin (BTC) has risen ~50% over the past week following a ~60% drop throughout early January and February. The leading cryptocurrency now has a market cap of ~US$150 billion, with over US$3.5 billion traded over the past 24 hours.

The mining sector is heating up rapidly all over the world, bringing additional decentralization to an industry that has been concentrated in China for many years. While being compared to a gold rush, there is an increasing focus on hardware and energy demands.

Nvidia stock continues to soar, in part due to GPU mining demand. Nvidia CEO Jensen Huang admitted crypto was a “real part” of their business in Q4 2017 and that, “crypto is a real thing, it’s not going to go away.” Later this month the Toronto stock exchange will list the Vancouver-based Hut 8 Mining Corp, a company backed by Georgian mining company Bitfury — one of the main competitors of China-based Bitmain.

In order to maximize returns, miners are generally concentrated where electricity is cheap. These geographic locations typically have renewable or alternative energy sources, as is the case in Washington State and Iceland.

Washington State has seen a large uptick in mining activity recently due to relatively cheap hydroelectric power and a large quantity undeveloped land. Mining is slated to become a multimillion-dollar business in Chelan County, where the local power provider, Chelan Public Utility District (PUD), is dealing with a surge of requests to build large-scale mining facilities. The county of 72,400 residents already has 16 cryptocurrency mining operations up and running.

Iceland may be using more power to mine BTC than they use to power homes by the end of 2018, according to reporting from the BBC. Johann Snorri Sigurbergsson, a spokesman for Icelandic energy firm HS Orka, said that there is so much demand for BTC mining data centers in Iceland that the country wouldn't have enough electricity to supply them all were they to be built.

Japanese e-commerce company DMM also announced plans for a 1,000 unit mining farm in the Ishikawa Prefecture, taking advantage of low ambient temperatures and cheap electricity costs, while Italian utility company Enel Italy has decided against selling power for the purposes of cryptocurrency mining as it is an “unsustainable practice that does not fit with the business model.”

While mining operations across the globe expand, crypto has entered the zeitgeist of several central bankers and economists. The previous U.S. chair of the Federal Reserve, Janet Yellen, held a hawkish stance on BTC, calling it a “highly speculative asset” that “doesn't constitute legal tender.” The Executive Director of the Oesterreichische Nationalbank, Austria’s central bank, agreed. Kurt Pribil said that “bitcoin price is pure speculation.” French and German finance ministers have also raised concerns over education and risk management, and plan to propose restrictions on BTC at the Argentinian G20 meeting in March.

International Monetary Fund chief Christine Lagarde believes international crypto regulation will be necessary and “inevitable,” in regards to activities involving dark markets rather than crypto itself. President of the European Central Bank (ECB), Mario Draghi, has a warmer approach, suggesting “banks will show positive interest” and that the ECB cannot and will not regulate BTC.

In the meantime, the European Union Agency for Law Enforcement Cooperation (Europol) and other police agencies remain focused on money laundering and other illicit activities using cryptocurrencies. The Executive Director of Europol, Rob Wainwright, estimates that about 3-4% of the £100bn in illicit proceeds in Europe are laundered through cryptocurrencies.

In the U.S., a resident of Ohio was recently arrested for allegedly running a fake ID ring where US$4.7 million of BTC was confiscated. In Russia, scientists were recently arrested for using a nuclear supercomputer to mine BTC. Computers within nuclear facilities are rarely connected to the internet as a preventative measure against hacking. However, the scientists apparently connected the computer and were promptly arrested.

In less nefarious bitcoin adoption this week, real estate sales for BTC transactions also continue to increase. A Florida company recently completed its third bitcoin-only transaction, selling a Miami townhouse for 41.35 BTC, or US$338,878. A previous bitcoin-only Miami transaction included a penthouse for 33 BTC, or US$547,000 at the time. Fifty luxury apartments were recently sold for BTC in Dubai as well, with one buyer taking 10 units.

However, banks outside the U.S. have begun to ban BTC purchases with credit cards, including the Bank of Ireland as well as several banks in the United Kingdom. Pantera Capital CEO, Dan Moorehead, continues to remain extremely bullish saying, “there’s such an institutional appetite to get exposure to this. It’s a half a trillion dollar asset class that nobody owns. That’s a pretty wild circumstance.” Institutional traders continue to gain exposure to crypto through CME’s BTC cash-settled futures. 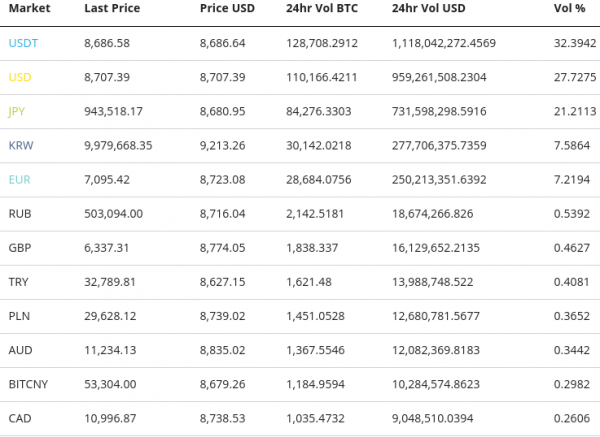 Over the counter volume globally is nearing record highs set in December.

The current BTC trend is roughly neutral, based on high timeframe metrics. Indicators such as the Ichimoku Cloud, Exponential Moving Averages (EMA), Relative Strength Index (RSI), Pitchfork, and basic chart patterns help determine entry and exit points, as well as the state of the trend.

The Ichimoku Cloud on the weekly chart remains bullish, but its metrics do not provide any long entry or exit signals. Price bounced off the 50 day EMA, and 50 on the RSI, for the first time in several months. This indicates a sustained bull trend with a complete momentum reset. Bullish continuation is likely if the 50 level on the RSI continues as support. The previous weekly candle formed a dragonfly Doji, a bullish reversal candle, which will be confirmed as a reversal following a consecutive green candle this week.

The Ichimoku Cloud metrics on the daily chart are all bearish. Although this would typically trigger a short entry, the distance of price from the Kijun suggests that the asset remains heavily oversold. An optimal short entry would occur when price returns to, but does not breach, the Kijun. This would indicate bearish continuation.

February 6th also marked the highest daily trading volume since China banned trading in early 2017. Volume spikes such as this are highly suggestive of an interim trend reversal, as was the case on September 15th.

The next long entry signal indicated by the Ichimoku Cloud on this time frame, will not trigger until all its metrics flip bullish again. This may not occur for several weeks. The Kumo twist on March 6th is the zone with the highest likelihood of price breaching the Cloud. If price is below the Cloud at that time, it will treat this zone as a magnet for upward momentum. Price is also currently near but below the 200EMA, a litmus test for trend status.

A Pitchfork on the daily chart with anchor points in February, May, and July shows price reaching the 1.618 level on the recent drop. The 1.618 level is borrowed from Fibonacci extensions and was also roughly seen as resistance at US$15,700 and US$17,000.

Buying in the current zone comes with the risk of a bearish invalidation of the Pitchfork. A significant break below the lowest diagonal support would invalidate the Pitchfork entirely. The upside potential is a return to the median line, followed by a test of the upper limit.

A bullish reversal pattern, the inverted head and shoulders, with a 1.618 fib extension and measured moves of US$11,500 and US$13,105, continues to form. The horizontal levels of this pattern strongly correlate with support and resistance levels from previous order blocks.

Lastly, market cycles are loosely correlated with the OKEX (previously OKcoin) quarterly futures expiration dates. January and July have preceded the beginning of relative bearish reversal periods (red), whereas April and October have preceded the beginning of relative bullish reversal periods (green). This has occurred irrespective of the macro trend.

The ever-expanding mining data centers across the globe continue to add pressure to regional power supplies. Although mining profitability will inevitably be affected by any rise in the cost of power, the additional investment in the crypto industry lends sustainability to the industry as a whole.

Following the generally dovish Senate hearing on cryptocurrency last week, regulators around the world continue to reveal their positions. While most regulators have adopted a wait and see approach, law enforcement continues to report on illicit activities, in spite of the relatively minor use of cryptocurrency.

Technicals are neutral based on the trend metrics with a complete momentum reset. Exchange-traded and OTC volume continue to sustain levels seen during the ATH period in December. Low timeframes show a bullish reversal pattern which should conclude within the next 24 hours, eventually bringing BTC back above US$10,000 once the pattern completes.