Bitcoin investors are rushing to “stack sats” with their $1,200 stimulus checks

After weeks and weeks of promises, the past few days have seen millions of tax-paying Americans receive their $1,200 (or less if you’re a high-income earner) tax-free checks from the U.S. government.

Due to the fact that over 22 million Americans have lost their jobs over the past month due to the COVID-19 outbreak, much of this money went to food, rent, mortgage payments, medicine, and other essentials. But some are splurging their cash, spending it on Bitcoin.

Yeah, really, they’re spending their free money from the government on our favorite orange coin.

As crazy as this may sound, Bitcoiners eligible to receive the free money from Uncle Sam have done are doing what they do best: stacking sats.

Guy Bennett, BitcoinorBust, and El Barto are among those embroiled in the cryptocurrency community to have spent their $1,200 stimulus checks on satoshis, and sats only. For some context, $1,200 can buy around 0.17 BTC at current prices.

What’s crazy is that serious data indicates that it’s far from only three individuals that decided to blow their $1,200 on Bitcoin.

Brian Armstrong, CEO of Coinbase, noted that his company processed exponentially more $1,200 purchases of cryptocurrency yesterday that it does normally, with the % of buys or deposits that are exactly $1,200 growing from an average of ~0.08% to 0.375% on Wednesday. 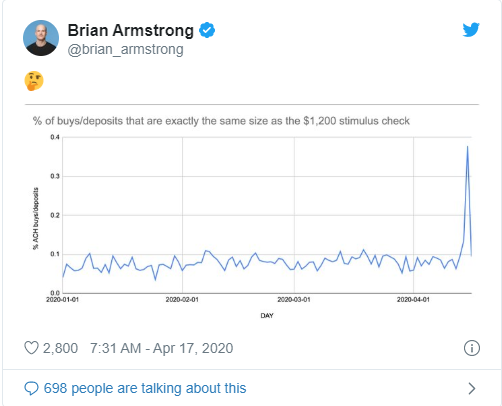 It’s important to note that the $1,200 stimulus check being used to buy Bitcoin isn’t only an act perpetrated by long-time believers and diehard HODLers.

Jason Yanowitz of BlockWorks Group — a crypto media and events company that purportedly is enacting a hiring freeze due to the pandemic — said on Apr. 16 that one of his friends bought BTC for the first time with a portion of the stimulus cheque. 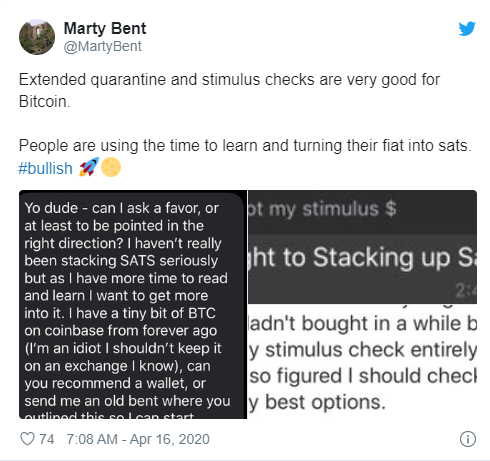 In a way, it’s fitting: helicopter money, which is money printed out of thin air by the government, being spent on Bitcoin is poetic.

Indeed, as mentioned incessantly by some of crypto’s biggest bulls, the existence of these checks and similar distributions of “free money” around the world are fundamentally bullish for scarce assets like gold and Bitcoin.

The baseline consensus amongst executives of and leading investors in the crypto space is that Bitcoin’s value is being proven by the debasement of fiat money around the world, enabled by efforts to stimulate the economy, be it through central bank asset purchases or these checks.

As said by Dan Morehead of Pantera Capital:

“As governments increase the quantity of paper money, it takes more pieces of paper money to buy things that have fixed quantities, like stocks and real estate, above where they would settle absent an increase in the amount of money. The corollary is they’ll also inflate the price of other things, like gold, bitcoin, and other cryptocurrencies.”