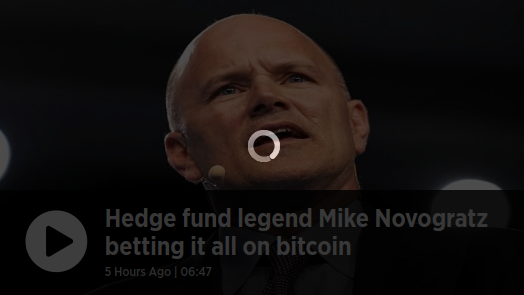 Novogratz is starting a $500 million fund to invest in cryptocurrencies, initial coin offerings and related companies.

The former Fortress Investment Group manager says he's been investing in bitcoin and its underlying blockchain technology for a while and sees bitcoin's price rising to over $10,000 in the next six to 10 months, largely because of heavy investor interest. Bitcoin was up 2.1 percent on Tuesday, to $4874.15 as of 5 p.m. ET, according to CoinDesk, and has surged in value this year.

"I can hear the herd coming," he said during an appearance after market hours Tuesday on CNBC's "Fast Money." He likened bitcoin to digital gold.

Novogratz is starting a $500 million fund to invest in cryptocurrencies, initial coin offerings and related companies. He put $150 million of his own money into Galaxy Digital Assets Fund and plans to raise the rest from outside sources by January, mainly from wealthy individuals and families and fellow hedge fund managers.

He told Bloomberg Television last month that digital currency like bitcoin is "going to the be the largest bubble of our lifetimes." JPMorgan Chase CEO Jamie Dimon last month called bitcoin a "fraud" and said he would fire anyone at his bank for trading it.

But whether bitcoin lasts or eventually gets replaced by the next new thing, the underlying blockchain technology is probably here to stay, he said. "Blockchain will change the way we live," he said. "This is not going away."